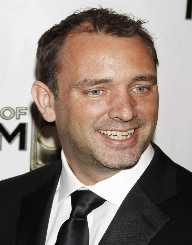 American producer, director, screenwriter and actor Randolph Severn Parker III, best known as Trey Parker, the co-creator of the revolutionary animated adult comedy TV series South Park, came into existence on October 19, 1969, in Conifer, Colorado, United States of America. He is the only son and second child of his parents, Randolph and Sharon Parker. His father Randolph “Randy” Parker was a geologist by profession and his mother Sharon worked as an insurance agent. Shelley was the name of his only older sister. His fascination towards the world of drawing and painting was prevalent from his early childhood days.

He began following Monty Python, a pioneer in sketch comedy show, on television from his third grade and idolized him. During his sixth grade, he developed a habit of making sketches and submitted one of his sketches titled ‘The Dentist’ as his participating entry in a talent show organized by the authorities of his school. The sketch generated a lot of controversy due to its uncanny theme which did not go down well with the concerned people including his parents and the school management.

He started making short films with the help of his friends on weekends when he was 14. Armed with a new video camera gifted by his father, Parker and his companions continued to make such short experimental films until their high school graduation. As a head of the choir group of his school, he performed his role in The Best Little Whorehouse in Texas and Flower Drum Song admirably well. His interest in music was centered on comedy-centric songs and he, along with friend David Goodman, created a full-length comedy album ‘Immature: A Collection of Love Ballads For The '80's Man” when he was only 17.

After having graduated from the Evergreen High School in 1988, his love for music propelled him to enroll himself at the Berklee College of Music. He spent only one semester at Berklee and went on to study music as well as the Japanese language in the University of Colorado at Boulder. While studying at the University, he met fellow student Matt Stone and developed an instantaneous understanding and rapport with him. Matt Stone eventually became his best friend, business partner and co-creator of the popular animated TV series ‘South Park’.

While still pursuing his university studies, Parker along with his friend-cum-collaborator Matt Stone made a film called ‘The Spirit of Christmas’ (also known as Jesus vs. Frosty). The film featured four abusive and indecent boys and a contemptuous portrayal of Jesus Christ. The film was initially shown at a student film screening in 1992. It attracted the attention of a television executive and was remade. The remake version of the film was released in 1995 and became one of internet’s first viral video. Trey Parker made a full-length movie ‘Cannibal! The Musical’ in collaboration with Matt Stone in 1993.

Both Parker and Stone moved to Hollywood after their university days are over. Their initial years in Hollywood were a period of utter struggle and false hope. Both of them separately worked on a theme and created two different plots for a children’s program titled ‘Time Warped’ to be televised on the Fox Kids division. However, to their utter dismay and frustration, none of the plots were selected for the program.

Canadian multinational Seagram Company Ltd., the then largest owner of the alcoholic beverage lines in the world, was throwing a party on the occasion of their accession of the Universal Studios. Parker and Stone were asked to produce a short film for showing in the party. The result was a comedy short film titled ‘Your Studio and You’ featuring celebrities like Steven Spielberg, Sylvester Stallone, and Demi Moore. The success of ‘The Spirit of Christmas’ and its widely circulated remake version was going viral on the Internet which thereby prompted the Comedy Central cable network executives to come forward with a proposal to the duo of Parker and Stone to develop a comedy animation series for showing in their TV program. On the basis of this proposal, the duo began the process of making the pilot episode of ‘South Park’ on a shoestring budget of $300000. The shooting was completed during the summer of 1996 in approximately three and half months. The name ‘South Park’ was taken from a real Colorado basin of the same name where there were reports about UFO and Bigfoot sightings and mutations of domesticated animals rampant among the local residents.

On August 13, 1997, ‘South Park’ was premiered on Comedy Central channel. Garnering the attraction of millions of viewers for its unique adult-oriented themes, derisive and preposterous change of plots in a sudden manner and the use of expletives in a spontaneous and informal way made the series an immediate sensation. The average viewership varied between 3.5 and 5.5 million viewers on a uniform basis. The stupendous success of South Park oversaw Comedy Central channel becoming a cable industry power in a very swift and spectacular transition from its lowly position of having only 21 million subscribers before the commencement of the telecast of the comedy series. During the unprecedented long run of South Park, it earned five Primetime Emmy Awards, the latest being in 2013 for the episode of ‘Raising the Bar’, turning the fortune of Comedy Central channel on its head. The success of the show also catapulted Parker and Stone to stardom with affluence as its natural ally.

He won a Grammy Award in 2011 for Best Musical Show Album for ‘The Book of Mormon: Original Cast Recording’. His theatrical production ‘The Book of Mormon’ earned him four Tony Awards in 2011 which includes the category of Best Direction of a Musical.

Parker married Emma Sugiyama in January 2006. The marriage eventually ended in divorce in 2008. He married Boogie Tillmon on April 2, 2014, after having a long-standing relationship with her. The couple is blessed with a daughter, Betty Boogie Parker, who was born in 2013 before the solemnization of their marriage.