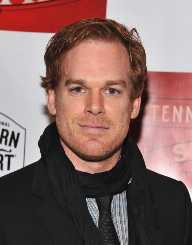 Michael C. Hall was born on February 1, 1971. He is an American actor. He is one of the accomplished actors in Hollywood.

Michael C. Hall was born on February 1, 1971, in Raleigh in North Carolina. He was born to William Hall who was an IBM employee and Janice Hall who was a mental health professional. He was brought up as a single child. He attended Ravenscroft School where he graduated from in 1989. He started acting while he was in school. In 1989, he joined Earlham College, Richmond, Indiana. In 1993, he graduated from the school. He later joined Tisch School of Arts, New York University. He graduated from the school in 1996.

In 1998, Michael C. Hall began his career as a thespian at the Off Broadway Theatre, New York. He appeared in classics such as ‘MacBeth.’ He also played in plays such as ‘Henry V.’ In 1999, he got a role as an Emcee in the play ‘Cabaret.’ In 2001, he starred in the dark comedy series ‘Six Feet Under’ which was directed by Alan Ball. In 2003, he appeared in the film ‘Paycheck.’ In 2006, he appeared in the show ‘Dexter’ which was a hit. He became very popular among the Americans. He won numerous awards for his role in the show.