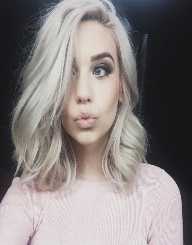 Born on September 27, 1998, Maddi Bragg is an American rising social media fanatic. She is one of those exploring social media to present themselves out the world. Maddi Bragg has become a famous YouTuber and Vlogger with her beauty and lifestyle segments. Starting as a young and innocent girl, she is gradually making it happen with the two YouTube channels, including theMadisenrosebeauty1, which currently has over 1.3 million subscribers. Her YouTube experience started in 2011 when she was just 13 years and has since caught the attention of fans who loved to follow beauty tutorials.

Today, she has up her game on YouTube with improved tutorials not just about beauty and lifestyle but also includes making challenge videos, vlogging about intense topics and giving makeup tutorials- product hauls. Maddi Bragg is not only on YouTube but also exploring other sites like Instagram with 1.1 million followers and on Twitter with 374,000 followers. So for interesting beauty topics, just check out on her channel. Maddi’s popularity on YouTube has also gained her the opportunity to work with brands like Cover Girl and Nordstrom. She has also come out with her own original phone cases in collaboration with Wildflower.

Maddi Bragg announced her social media presence with the creation of theYouTube channelMadisenrosebeauty1 at age 13. With a humble beginning of displaying her interest in fashion through beauty and lifestyle tutorials, her channel currently has over 1.3 million subscribers and over 88 million video views. Maddi Bragg gives systematic tutorials on makeups and how to stand out in classy outfits. She has since up her game expanding her activities to include challenge videos and monthly shopping hauls among other interesting things.

She also shares personal life experiences during the Q&A segments on her channel. She has also created another channel Maddi Bragg Vlogs to vlog about her daily activities. The channel is gradually gaining attention with about 300,000 subscribers. Maddi also has a strong presence Twitter and Instagram. She has about 1.1 million followers on Instagram and more than 374,000 followers and Twitter. The rising social media star has been able to hold on to fans with her constant interaction with them and her genuine persona.

Maddi Bragg was born on September 27, 1998, in Southern California. She is the last child of three by her parents. The 18-year-old chap aside from being a social media phenomenon loves photography and does that whenever she is not on YouTube. Maddi Bragg is currently in a relationship with electronic music director Jacob Taff. In her video, My Boyfriend Does My Makeup she reviews how the two are committed to each other and the type of bond between them.