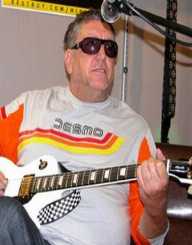 Steve Jones was born on September 3rd, in 1955. He was famous for being an exceptional singer and a talented guitarist. He is mainly known for playing with The Sex Pistols. He was among the pioneers for the British band.

Steve Jones was born Stephen Philip Jones on September 3rd, in 1955. His birthplace was in Shepherd’s Bush in London. Jones had to be raised by his young mother as his father left them when he was still a toddler. After his father left, Jones mentioned in his autobiography that his step-father sexually abused him. Later, Jones pointed out that his bitter sexual experience while he was young contributed to his sexual addiction. Similarly, this also affected his romantic relationships as they never lasted.

Before Sex Pistols came to light, Jones co-founded the group called the Strand. Some of the members of the group were Wally Nightingale and Paul Cook. It is while playing with the group that Jones honed his talent with the guitar. In Mid-1970s, they dropped Nightingale. Afterward, they renamed the group to The Swankers.

With the help of Paul Cook and Glen Matlock, Jones co-founded The Sex Pistols. Sooner or later John Lydon joined them.

After forming their new English band, the members enjoyed immense success with the release of hits such as “God Save the Queen,” “Holidays in the Sun” and their debut hit single called “Anarchy in the U.K.”

In 1978, the Sex Pistols broke up. Jones did not give up on his career as he again co-founded the Professionals alongside Paul Cook. Together, the duo released four singles.

Following the breakup of the Pistols things did not run smoothly for Jones as he engaged deeply in drug use. Around this period, he was addicted to heroin. Nonetheless, he managed to successfully clean himself in 1987.

Throughout his career little is known about Steve Jones personal life more so with women.