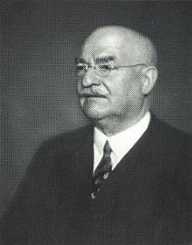 Carl Bosch was born on August 27, 1874. He was a German chemist and industrialist. He won a Nobel Prize in Chemistry for the development of the Haber-Bosch process for high-pressure synthesis of ammonia. He was a co-founder of the IG Farben, one of the world’s largest chemical companies. He also had immense interest in astronomy. He is labeled as one of the greatest chemists who ever lived. He achieved a lot during his lifetime as a chemist. He died on April 26, 1940.

Carl Bosch was born on August 27, 1874, in Cologne, Germany. His father was a gas and plumbing supplier while his uncle, Robert Bosch was a famous engineer. His uncle invented the first commercially usable high-voltage spark plug. He graduated high school and started working as a metal worker in a machine shop for a short period.

In 1899, Carl Bosch joined Badische Anilin und Sodafabrik (BASF), Ludwigshafen, Rhine as an entry level chemist. BASF was Germany’s largest chemical and dye firm. At the firm, he actively participated in the development of the synthetic indigo industry. This he did under the supervision of Dr, Rudolf Knietsch. He used cyanides and nitrides in trying to solve the problem of the fixing of nitrogen. In 1907, he started a plant for the production of barium cyanide. In 1908, he began a large scale project of developing the synthesis of ammonia on an industrial scale.

In 1913, Carl Bosch's project became successful, and the first ever Haber-Bosch plant known as Stickstoffwerke was opened in Oppau. In 1917, another plant known as Leunawerke was opened near Merseburg. In the new plant, he included the synthesis of methanol and the hydrogenation of oil to the production program. In 1919, he was made the Managing Director of the Badische Anilin- und Sodafabrik.

Carl Bosch received honorary doctorates from several institutes such as Halle University and the Technische Hochschule in Darmstadt among other institutes. In 1922 and 1939, he was conferred the distinction of Honorary Senator by the Universities of Heidelberg, Leipzig respectively. In 1939, he was also conferred the distinction of Honorary Citizen of Frankfurt.

In 1902, Carl Bosch married Else Schiback with whom he had two children. He loved collecting bugs including butterflies and beetles. He also enjoyed collecting minerals and gems. The asteroid 7414 Carl Bosch was named after him. During his lifetime he suffered from alcoholism and depression. He died on April 26, 1940, in Heidelberg, Germany. He left back a legacy that is respected by many chemists.