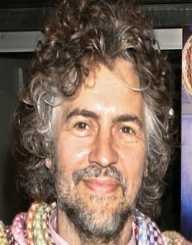 Wayne Michael Coyne is an American singer and songwriter. Born on January 13, 1961, he is the lead vocalist and guitarist for the band the Flaming Lips. Coyne served as the primary songwriter for the band peening down most of their songs. The group has released several albums including Yoshimi Battles the Pink Robots, Ambulance Driver, Zaireeka. They have won two Grammy Awards.

Wayne Michael Coyne was born on January 13, 1961, in Pittsburgh, Pennsylvania in the United States. He was fifth of six children to Dolores ‘Dolly’ Jackson and Thomas Coyne. His siblings include Mark, Linda, Martin, Kenny, and Tommy. The family moved to Oklahoma, later after his birth and that was where he grew. Growing up, young Coyne had an interest in music and playing pickup football.

Wayne Coyne received education at Central High School, where he showed great talent in drawing. He continued at Classen High School in 1975. While in high school, he also worked at a Long John Silver’s restaurant in Oklahoma City as a fry cook. Coyne and other workers at the restaurant were held at gunpoint during a robbery attack at the restaurant.

At a point, he thought he was going to die, but the robber fled the scene, without harming anyone. He continued to work at the restaurant until 1991. He also sold marijuana during this period.

With his keen interest in music, Wayne Coyne formed the Flaming Lips in 1983. Other members of the band included his brother, Mark, as a lead singer, Richard English playing the drums and Michael Ivins on the bass guitar. After Mark left the group, Wayne Coyne took over as the vocalist. He also became the primary songwriter of the group. Coyne had a trademark of pouring fake blood to his face through a hidden tube during live performances.

Wayne Coyne also made entrances into large-crowded festival performance in grand style by dropping off an alien mothership in a bubble and floats across the audience. The band signed with Restless, releasing four records under the company including Hear It Is. Richard English was the second to leave the group and was replaced by Nathan Roberts. Guitarist Jonathan Donahue also joined the group later. Coyne and Michael remained as the only original members of the group.

The group signed with Warner Brothers in 1991. The Flaming Lips released several other albums under Warner. In 1993, Roberts and Donahue left the band with Ronald Jones and Stephen Drozd replacing them. Three years later, Jones also left.

In 2002, they released Yoshimi Battles the Pink Robots. They won a Grammy for best rock instrumental performance for "Approaching Pavonis Mons By Balloon (Utopia Planitia)" in 2003. In 2007, they won another Grammy for best rock instrumental performance with The Wizard Turns On...The Giant Silver Flashlight and Puts on His Werewolf Moccasins. The band’s 13th album, The Terror, was released in April 2012. Their albums include The Sound of Failure/ It’s Dark, Haven’t Got a Clue, Ambulance Driver, Zaireeka and One More Robot among several others.

Wayne Coyne has also collaborated with several musicians their works. He was on The Chemical Brother’s The Golden Path, 2003 and two years later recorded "Marching the Hate Machines (Into the Sun)" with Thievery Corporation on their The Cosmic Game album.

Wayne Coyne married J. Michelle Martin-Coyne but had no children with her. They separated in 2012.  Wayne Coyne filed for a divorce from his wife due to "irreconcilable incompatibility" in September 2013.