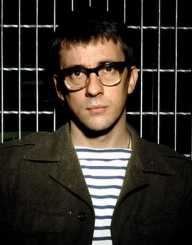 Graham Leslie Coxon was born 12th March 1969, in Rinteln, Germany. The family was stationed there. When the family returned to England, Coxon lived in Spondon, near Derby, as a child. He then moved to Colchester in Essex. He studied at the Stanway School, and it was while there that he met fellow Blur member, Damon Albarn.

Graham Coxon also studied at Goldsmiths College in London, where he majored in Fine Arts. He was at the college for two years, but he left due to the success he was starting to have with his band.

Graham Coxon's first major success was with his band called Seymour, formed in 1988. The band later changed its name to Blur. Their debut album, Leisure, was released in 1991. Between 1993 and 2003 they released another six albums. Every album went at least gold, with four of them going platinum as well.

In November 2001, Coxon went into the hospital for 28 days to receive treatment for alcoholism. The other band members had gone back to the studio to start recording for their 2002 album, Think Tank. When Coxon joined the others in the studio, after five days, he was asked to leave as things weren’t going well. He took this as a sign and left the band.

Graham Coxon eventually reconciled with Albarn, and Blur reformed to do a series of concerts throughout 2008 and 2009. In 2010, they released a new single called Fool’s Day. The band announced they would get together from time to time to record singles but would not be reforming. In 2015, they released their eighth studio album, The Magic Whip, their first album in 16 years.

In addition to recording, Graham Coxon had his own independent record label, Transcopic. He is also an accomplished artist, and had his works exhibited at the ICA in London in 2004. Coxon also designs all his own album sleeves.