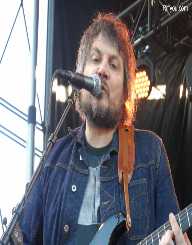 American singer-songwriter and musician Jeff Tweedy was born on the 25 August 1967 to Bob Tweedy and Jo-Ann Werkmeister. Tweedy was one of four children born to the couple.

Tweedy graduated from Belleville Area College and then attended the Southern Illinois University in Edwardsville.

Jeff Tweedy began playing the guitar in his early teens and during his high school days met Jay Farrar. He joined The Plebes, an early 1980s garage band, with the Farrar brothers, Wade and Dade. Eventually, they changed their name to The Primitives. Dade Farrar left the band because he preferred a rockabilly style and Tweedy was moving the band towards punk rock.

The new lineup consisted of Tweedy, Jay Farrar, Wade Farrar, and Mike Heidorn. Later Wade Farrar took a break from the band to concentrate on his studies while Jay Farrar, Heidorn and Tweedy founded Uncle Tupelo (1986).

With Tony Margherita as their manager, the band began performing at various venues and after recording a demo tape, Not Forever, Just For Now (1989), they were signed to Giant/Rockville Records. Their first album was No Depression (1990). Their followup album was Still Feel Gone (1991). Their third album,  March 16–20, 1992 (1992) was produced by Peter Buck of the band R.E.M. Uncle Tupelo's fourth and final album was Anodyne (1993) which debuted at No. 18 on the Billboard Heatseekers chart.

They disbanded in early 1994 citing friction between various members and a lack of enjoyment in making music together. All four albums were re-released in 2003 with bonus tracks.

Jeff Tweedy went on to found Wilco with Ken Coomer, John Stirratt and Max Johnston. Their first studio album, A.M., was released in 1995. Tweedy wrote all the songs except for It’s Just That Simple which was written by Stirratt. A.M. reached No.27 on the Billboard Heatseekers chart. After the release of A.M., Jeff Bennett joined Wilco. While touring, Tweedy began the process of writing songs for Wilco’s follow-up album, Being There (1996). Other collections include Summerteeth (1999), Yankee Hotel Foxtrot (2001), A Ghost is Born (2004), Blue Sky (2007), The Whole Love (2011) and Schmilco (2016).

Tweedy was also a part of the Golden Smog project, which released Down by the Old Mainstream. He also collaborated with Billy Bragg recording Mermaid Avenue (1998) and Mermaid Avenue Vol. ll (2000). The documentary I Am Trying to Break Your Heart is about the Wilco and the tensions within the band. Tweedy has worked with the group Loose Fur which put out two albums Loose Fur (2003) and Born Again (2006).

Jeff Tweedy has had issues with depression, anxiety, and migraines as well as alcohol problems. He entered rehab in 2004. In 2018, he published a book, Let's Go (So We Can Get Back): A Memoir of Recording and Discording with Wilco, Etc. Tweedy is married to Susan Miller, and they have two sons, Samuel and Spencer. In 2014, Susan Miller Tweedy fell in with lymphoma.