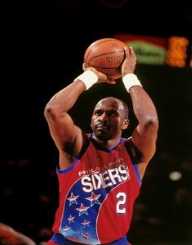 American basketball player Moses Eugene Malone was born on March 23, 1955, in Petersburg, Virginia. Since he was two years old, his mother Mary raised him on her own. His father was an alcoholic. Malone is the only child in his family.

Malone went to Petersburg High School. There, he started to play basketball, although he had an interest in the game since childhood. He played for his school’s team with significant success - Malone went two years without ever being defeated. The team won Virginia state championships two times during this period.

After High School Malone intended to play for Terrapins at the University of Maryland, but he was selected to play for Utah Stars of American Basketball Association. It was then, in 1974, when he decided to become a professional basketball player.

In the 1974-75 season, Moses Malone played for Utah Stars. He signed a five-year contract with the team, worth $1 million. It was unprecedented that Malone went directly from high school to a professional league. He began his career by playing at forward and in his rookie year was named ABA All-Star and ABA All-Rookie.

The 1975-76 season was not so successful for the Stars, and Malone was sold to Spirits of St. Louis. He played with the team for two seasons.

Moses Malone was pre-selected by the New Orleans Jazz, to play for the 1976-77 season. But the team replaced him with Gail Goodrich. Malone was then selected for Portland Trail Blazers but never appeared in the regular-season game. The team also chose forward Maurice Lucas, but concerns arose about the Blazers financial abilities, and they eventually decided to release Malone.

Before the first game of 1976-77 season, in the draft for the next season, Malone was selected to play for Buffalo Braves. He played two games for the team, but Malone was not satisfied with his time on the field. The team then traded him to Houston Rockets.

The next season Malone played for the Houston Rockets with tremendous success. He appeared in 82 games and averaged 13.2 points per game, 13.1 rebounds. He also set the NBA record with 437 offensive rebounds in a season. This season, the Rockets played in the Eastern Conference Finals but lost to Philadelphia 76ers.

In his second NBA season, Moses Malone acquired a stress fracture in his foot, which required surgery. He had to skip 23 games in the finals. Despite this, he appeared in the NBA All-Star game of 1978 and increased his scoring to average 19.4 points per game. In the 1978-79 season, Malone was named NBA’s Most Valuable Player. He was also voted to the All-NBA First Team and to play in the 1979 NBA All-Star Game.

Moses Malone’s average scores keep increasing, with 25.8 points per game in the 1979-80 season. He was the second-best in the league for his average 14.5 rebounds. In 1981, The Rockets finally reached NBA finals but lost to the Celtics. During this season, Malone was playing on average 42 minutes per game. He set many of his career highs during this season, with 558 offensive rebounds and averaged 31.1 points per game.

After the 1981-82 season, Malone became a restricted free agent and signed with the Philadelphia 76ers a six-year contract worth 13.2 million. In his second season on the team, Malone led the 76ers to the Eastern Conference Finals. The Sixers only lost one game in the playoffs. The 1983 playoffs made 76ers legendary - their score was 12-1- the most dominant playoff run in NBA history. This score was beaten in 2001 when Lakers went 15-1.

His next season was a career-low, due to an ankle injury. He was even selected for All-Star game, but couldn’t play. The following season, Malone was voted in the All-Star game for the 8th time in his career. In the 1985-86 season, Malone suffered an orbital fracture while playing against Milwaukee Bucks.

After the end of the season, Malone was traded to play for the Washington Bullets. With the Bullets, in the 1986-87 season, Malone scored his 20,000 points. The same year, he also reached his personal goal, scoring 50 points in one game against the New Jersey Nets. The Bullets played in the 1988 playoffs but lost to Detroit.

In the 1988-89 season, Malone joined the Atlanta Hawks. His first year with the team was successful when he became the first and only player in NBA history to average 20 points and ten rebounds for four different groups. This year, he was voted for the 12th straight time for the NBA All-Star game. His next season turned out to be a career-low, but he had reached his 25,000-career point and recorded his 15,000 rebound.

In the 1990-91 season, Malone played for the Milwaukee Bucks. He played in all 82 games with the team. In 1992, Malone was sidelined due to a herniated disc in his spine. He decided to have surgery and skipped almost all of the 1992-93 season. He only appeared for 11 games. He then went back to play for the 76ers for one season, and in 1994 he played for the San Antonio Spurs. After the 1994-95 season, Malone finally retired.

Moses Malone’s first marriage was to Alfreda Gill. The couple had two sons. In September 1991, Alfreda sued for divorce. During lawsuit, she got a restraining order. Malone was accused of adultery, abuse, and even threatened to kill his wife, but denied the accusations. The divorce was finalized in 1992, but in 1993, he was arrested for violating a peace bond with Alfreda. She accused Malone of stalking, illegally entering her home and threatening to kill her.

Malone has never married again, but he was dating Leah Nash, with whom he had a son. Malone died in his sleep in 2015, at the age of 60 years. He had previous complaints about the irregular heartbeat, and the cause of death was listed to be hypertensive and atherosclerotic heart disease.