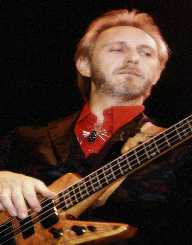 John  Entwistle was born 9th October 1944, to Herbert and Maud Entwistle. Entwistle was an only child and was born in Chiswick, London, England. Both his parents were musicians, with his father playing the trumpet, and his mother, the piano. His parents separated soon after he was born.

In his second year of school he met Pete Townshend, and they started a jazz band called the Confederates. They decided to switch to rock and roll, and  Entwistle changed to guitar.  Entwistle found the guitar quite difficult because of his large fingers, so he took up the bass guitar instead.

Roger Daltrey had also attended the same school as Townshend and Entwistle, and  Entwistle’s talent had caught his eye. Daltrey was a year ahead of the others with his study and left school before them, but when he formed his band called the Detours, he asked Entwistle to be the bass guitarist.

Once he had joined the Detours,  Entwistle was instrumental in getting Townshend admitted to the band as well. Daltreysoon got rid of all the band members except for Entwistle, Townshend, and the drummer, Doug Sandom.

The band decided that Daltrey should be the front-man and lead singer, and Townshend took over the position of guitarist. The band also changed their name to The Who.

As well as performing, John  Entwistle also wrote songs and had inclusions on most of the band’s albums. Entwistle did, though, resent that Townshend wouldn’t let him sing them as well, and this made  Entwistle the first band member to release a solo album.

His first solo album was released in 1971, called, Smash Your Head Against the Wall.

In 1975, the band didn’t tour as they were concentrating on recording their album, The Who by Numbers. During this period  Entwistle toured himself doing solo concerts.

Through the 1990s,  Entwistle toured regularly. In 1990 he toured with the Best, which was a group of performers that came together for a short while, including Keith Emerson, Joe Walsh, Jeff Baxter, and Simon Phillips.

John  Entwistle was also an artist, and between 1996 and 2002 was also involved with his art and attending art openings.

As a member of the Who, John  Entwistle was inducted into the Rock and Roll Hall of Fame in 1990. Entwistle is also a recipient of the Grammy Lifetime Achievement Award.

Entwistle died in Las Vegas, in a room at the Hard Rock Hotel and Casino, on 27th June 2002. His death was determined to be by heart attack.

John  Entwistle is recognized as the greatest bass player in history. Entwistle has been compared with Jimi Hendrix, in that the way Hendrix made the guitar so popular and enthralled people with what he could do with the guitar, Entwistle was the same with the bass guitar.