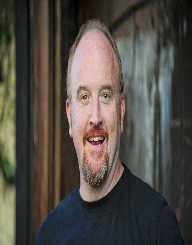 Comedian Louis CK was born Louis Székely on 12 September 1967. His mother Mary Louise Davis was studying at Harvard University when she met his father, Luis Székely. They married and had four children, including Louis, who has three sisters. The family moved to Mexico City when he was very young, returning to the US when he was seven. His parents divorced, and he was brought up by his mother in Newton, Massachusetts. When he returned from Mexico as a child, he could speak fluent Spanish. Today, Louis CK holds dual US/Mexican citizenship.

Best known for his award-winning show, Loue which he created, wrote, produced and directed.

Louis CK was brought up a Roman Catholic but is on record as saying that he is agnostic.

After graduating from school, Louis CK worked in the automotive industry and did other jobs before deciding to move to New York City in 1989. It was tough going at first, playing to half-filled clubs and not getting earning enough money work to make ends meet. He got a writing job on Caroline’s Comedy House. Things then started to improve: he co-wrote a sketch for Late Night With Conan O’Brien. Louis CK co-wrote O’Brien’s first sketch on the show.

Louis CK  then found work writing on The Dana Carvey Show as well as the Chris Rock show.  When he wrote and directed Pootie Tang (2001), the reviews were less than favorable. He starred in the HBO Lucky Louie show for one season. Then he created a series of comedy specials which he sold online. Sales were impressive, and he donated over $200,000 to charity.

The show that made Louis CK’s name was Louie. He wrote, directed, produced and starred in the show which debuted in 2010. Louie was semi-autobiographical, and he dealt with the various issues he was facing as a single man in New York City bringing up two daughters. The show was a success and has received numerous awards. In 2015, Louis CK announced that he felt he had taken the character as far as he could. He did entirely not rule out a return of Louie further down the track but said he needed a break to recharge.