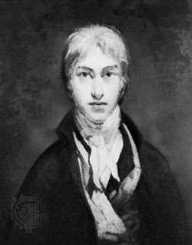 J. M. W. Turner was born on April 23, 1775. He was an English Romanticist landscape painter. He was known for his dramatic and atmospheric treatment of light in his many works. He was also known as the painter of light.

J. M. W. Turner was born on April 23, 1775, in Maiden Lane, Covent Garden in London. He was born to William Turner who was a barber and Mary Marshall. He was brought up alongside his sister Mary Ann who died while still young. In 1785, he was sent to live with his uncle at Brentford when his mother was admitted in hospital due to mental illness. He became interested in painting while in Brentford. He sold some of his paintings at his father’s barbershop. In 1789, he joined the Royal Academy of Arts. At the Academy, he learnt how to draw plaster casts of antique structures. He also learnt how to draw the human body.

J. M. W. Turner began his career by exhibiting oil paintings and watercolours at the Royal Academy. He travelled a lot in search of inspiration for his works. He painted during winter and travelled in the summer. Every year he would exhibit his paintings at the Royal Academy of Arts. In 1802, he travelled in Europe and studied at the Louvre in Paris, France. Joseph made more than three hundred and fifty paintings during his tour of Europe. He started earning an income from his artistic works.

In 1804, J. M. W. Turner managed to open a private gallery where his displayed his paintings. In 1807, he became a professor of perspective at the Royal Academy. He held the post of professor until 1828. ‘St. Mawes as the Pilchard Season’ and ‘Frosty Morning’ became his first paintings to have atmospheric and luminous quality. In 1819, he travelled to Italy where he drew one thousand five hundred drawings. His paintings were mostly inspired by his travel experiences. His works include ‘Rain, Steam, and Speed’ and ‘The Fighting Temeraire Tugged to Her Last Berth to Be Broken Up.’

J. M. W. Turner did not marry throughout his lifetime, but he was involved in a relationship with Sarah Danby with whom it is assumed he had two daughters, Georgina and Eveline. He later entered into a relationship with Sophia Caroline Booth with whom he lived with for almost eighteen years. He died on December 19, 1851, in Sophia’s house in Cheyne Walk, London. He was buried at St. Paul’s Cathedral.