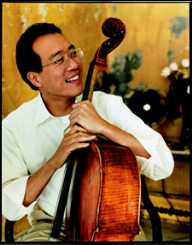 Yo-Yo Ma is a French-American cello player of Chinese descent.

Yo-Yo Ma was born in the city of Paris, France, on October 7, 1955. His father, Hiao Tsiun, was a music professor and violin player. His mother, Marina, was a professional singer. He has a sister named Yeou Cheng. When he was seven years old, his family relocated to New York City.

Yo-Yo Ma first studied at the Trinity School, a private prep school. After that, he attended the Professional Children’s School, a school for kids who work in the fields of the performing arts. At the age of 19, he attended Julliard. There, he studied under the American cello player Leonard Rose. He then enrolled at Columbia University, but he soon dropped out. After that, he transferred to Harvard University, and he got his degree in 1976.

Yo-Yo Ma started playing the violin and the piano at a very young age. He ultimately decided to focus on the cello. When he was five years old, he started to perform in front of audiences. When he was seven years old, he performed before the Presidents John F. Kennedy and Dwight D. Eisenhower. At the age of eight, he was part of a concert, and he appeared on The Tonight Show Starring Johnny Carson. In his teens, he was part of many orchestras. They included the Harvard Radcliffe Orchestra, the Marlboro Festival Orchestra, and others.

In 1986, Ma performed with the New York Philharmonic Orchestra. The event was a tribute for the 100th anniversary of the Statue of Liberty. In 1998, he founded the Silk Road Ensemble. It is an arts organization meant to promote the exchange of artistic ideas and collaborations. In 2006, he was appointed as a Peace Ambassador for the UN. He played the cello during the reveals of several Apple products. In 2009, he performed for the inauguration of President Obama. The same year, Obama placed him in the President’s Committee on the Arts and Humanities.

Yo-Yo Ma's music has appeared in many Hollywood films based in Asia. They include Seven Years in Tibet, Memoirs of a Geisha, and Crouching Tiger, Hidden Dragon. His music has also been placed in many epic films and crime films. They include The Untouchables, Once Upon a Time in America, and many others. He has also performed on the songs of singers such as India Arie and James Taylor.

Yo-Yo Ma has released more than 90 albums, winning a total of 18 Grammy Awards. He won many other awards, such as the Avery Fisher Prize, the Fred Rogers Legacy Award, the Dan David Prize, the Polar Music Prize, and many others. He has honorary doctorates from Harvard University and Princeton University. In 2011, President Obama awarded him with the Presidential Medal of Freedom. In 2016, the country of France gave him the title of Commander of the Order of Arts and Letters.

Ma has appeared on TV shows such as The Late Show with Stephen Colbert. Characters based on him have been shown on Sesame Street, The Simpsons, and Arthur.

Yo-Yo Ma’s wife is an art consultant called Jill Hornor. They have a son named Nicholas and a daughter named Emily.