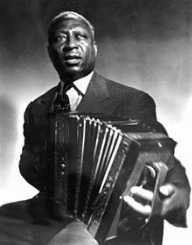 Huddie William Ledbetter, later known as Lead Belly, was born in the late 1880s. The exact date and year of his birth is not known. He was born on Jeter plantation near Mooringsport, Louisiana, United States of America. The name of his parents is Wesley Ledbetter and Sally Brown. Huddie was born when his parents were in a live-in relationship. They legalized their marriage only when Huddie turned five. They had their family home in Bowie County, Texas.

Huddie received his formal education until around the age of 13 attending a school in Texas. He participated in his school band besides helping his father with farming. While growing up, he began playing various musical instruments. Finally, he picked out guitar as his preferred first choice. As a teenager, he performed at local dance shows. He moved to Shreveport, Louisiana, at the age of 16. He earned his livelihood working as a musician during his 2-year stay in Shreveport. Huddie later met accomplished street musician Blind Lemon Jefferson and began playing together as a traveling musician. He started using his signature 12-string guitar at this point in time.

In December 1917, the police arrested Huddie on charges of murder. The court convicted him and ordered an imprisonment sentence of 20-years for him. In 1924, he made full use of the opportunity of singing for the Texas governor Pat Neff. The song he sang for the Governor was especially composed asking for clemency. The Governor eventually pardoned him and he came out of prison a year later. Five years after his release from prison he once again found himself in hot waters. In a stabbing incident, the police booked him in a serious charge of ‘assault with intent to murder’. In the ensuing trial, he was convicted of his charges and was given a prison sentence.

The Great Depression of the 1930s and the budget issues caused by it, allowed Huddie to apply for a remission of his sentence. In 1934, the incumbent governor freed him after hearing another of his song where he pleaded for mercy. The saga of his arrest and conviction continued when the police arrested him for one last time in 1939. He was subsequently imprisoned on charges of stabbing a person in a brawl in Manhattan. While serving prison sentences in jail, he acquired the nickname Lead Belly.


CAREER AS A MUSICIAN

Upon his release from jail in 1934 he undertook a concert tour of the East Coast. He already made acquaintances with folklorists Alan and John Lomax after his early release from prison. They identified and recognized his musical talent and took him under their wings. They published 48 of his songs and released an album of these songs with the title ‘Negro Folk Songs as Sung by Lead Belly, 1936’. Subsequently, he made his first commercial recording on American Record Corporation. In 1937, he arrived at New York in order to firmly establish himself as a professional musician. His final jail term of eight months during 1939-40 briefly interrupted his New York sojourn.

Thereafter, he worked with the likes of Woody Guthrie, Pete Seeger, Brownie McGhee, Sonny Terry and some others as lead singers. He participated in two radio series ‘Back Where I Come From’ and ‘Folk Music of America’. He also produced his own weekly radio show. Besides he recorded an album titled ‘The Midnight Special and Other Southern Prison Songs’ during his stay in New York.

He moved to the West Coast after having established himself as an acclaimed folk and blue singer. In Los Angeles, he signed with the Capitol Records and began recording seriously. On the height of success, he developed a deadly disease called amyotrophic lateral sclerosis (ALS)/ Lou Gehrig's disease. On December 6, 1949, he lost the battle with the disease and passed away at the age of 61.

His name is included in the 1988 Rock and Roll Hall of Fame. Though he was penniless at the time of his death, one of his famed songs “Goodnight, Irene” registered a million record sales within six months of his death. A singing group called ‘The Weavers’ adopted many of his songs including “Goodnight, Irene”, “Rock Island Line” and “The Midnight Special” and made them one of the best selling records of that time.