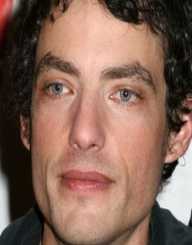 Jakob Dylan is an American rock singer and songwriter. He is known as the frontman of the group The Wallflowers.

Jakob Dylan was born on December 9, 1969, in New York City, New York. He is the son of rock legend Bob Dylan and his wife, Sara. He has two older brothers. The family moved to Los Angeles when he was about three years old. His parents divorced in 1977.

While in high school, Jakob Dylan played in many bands. After high school, Dylan attended the Parsons School of Design in New York City to pursue an art education. He dropped out of the school to pursue his music career.

Jakob Dylan searched for a band after leaving Parsons School. In 1989, he was in a band called The Apples. As some of the members moved to start new bands, he and his friend and bandmate Tobi Miller found new members. With new faces, they changed their band name to The Wallflowers. Dylan wrote their songs which led to their debut album in 1992. They had lukewarm reviews but continued playing clubs and other venues.

In 1996, The Wallflowers released their second album Bringing Down the Horse. It has been a commercial success with recognition from the Grammy Awards. However, the band released other albums after that success but was never able to capture the same attention. Also, the band was going through more and more members. The group took a break in 2005.

Jakob Dylan continued writing and producing his music. In 2008, he released his first solo album titled Seeing Things. In 2010, he then released Women + Country. He also appeared in tribute albums such as Endless Highway: The Music of The Band. In 2012, The Wallflowers reunited and went on tour following their new album Glad All Over. His work has also been a part of television. He created the original theme song for the CBS series The Guardian.

In 1992, Jakob Dylan married Paige. The couple has four children.

Even though he is the son of legendary songwriter Bob Dylan, he did not use his father’s legacy to make his way into the music business. He only addressed the connection after the success of The Wallflower’s Bringing Down the Horse.

Jakob Dylan was a part of the charity album titled Instant Karma: The Amnesty International Campaign to Save Darfur. The performers on the album covered John Lennon songs such as “Gimme Some Truth.” Dylan is a supporter of a number of organizations including the American Diabetes Association. He is also a supporter of Crohn’s and colitis awareness. He has performed for their Connecting to Cure event since 2012.