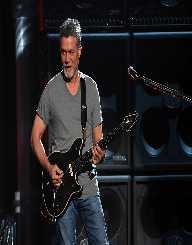 On Wednesday, January 26th, 1955, the co-founder of the American hard rock band, a Dutch-American singer, songwriter and producer Eddie Van Halen was born. Up to now, he is considered to be one of the greatest guitarists in the world. In fact, he was ranked number eight by the magazine “Rolling Stone” in the year 2011 while “The Guitar world” magazine readers voted him number one in the“The 100 Greatest Guitarists of All Time.”

Born in Nijmegen, Netherlands, Eddie Van Halen was the son of a Dutch father and Indonesian-born Eurasian mother. In 1962, they moved to the US where both Eddie and his older brother acquired the US citizenship through naturalization. The family settled in Pasadena California.

The Van Halen brothers were introduced to music by Stasys (Stanley) Kalvaitis who taught them classical piano in San Pedro. They did not enjoy it, but due to their mother's strict discipline, they soldiered on. During one of the interviews, Van Halen revealed that he never could learn the music.

Instead, he learned from listening and watching. In 1964 to 1967, Eddie won back to back the annual piano competition at the Long Beach College.  As a result, his brother started playing the guitar and Eddie acquired a drum kit for him to practice.

They went ahead to form “The Broken Combs band" where they performed at the Hamilton Elementary School, where Van Halen was schooling in the fourth grade. It is here that he felt the strong desire to become a professional musician.

Eddie Van Halen’s use of two-handed tapping, artificial and natural harmonics together with his melodic and rhythmic sensibility approach have left a mark in the world of guitarists. An interesting fact though is despite the enormous success Van Halen never made an effort to learn how to read music.

Eddie Van Halen met actress Valeria Bertinelli in one of their concerts in Louisiana, and they got married in California on April 11, 1981. They later had a son Wolfgang in 1991. He divorced in December 2005 from his wife, many reasons emanating from alcohol abuse.

Van proposed and married Janie Liszewski, his girlfriend who was an actress and stuntwoman on October 6, 2008, and June 27, 2009, respectively. The wedding ceremony was at his Studio City Estate and among the guests were his son Wolfgang and ex-wife Valarie. On January 1, 2011, Van Halen attended Valarie Bertinelli wedding accompanied by his son.

Eddie Van Halen suffered lingering injuries, many caused by acrobatic crashes and stage stunts. He did undergo a hip replacement surgery in November 1999 after his condition of chronic avascular necrosis which is a cellular death of bone components which he was diagnosed in 1995.

The rumors of Van Halen suffering from cancer were confirmed to the public in April 2001 by himself. Luckily he was declared cancer free in May 2002 after a surgery that resulted in the loss of a third of his tongue.

Van Halen had a Japanese tour in August 2012 but was forced to postpone it due to an emergency surgery that was caused by a severe bout of diverticulitis. His recovery took a long time between four to six months making the tour impossible.

Eddie Van Halen was graced with a 14th annual Awards party at Elton John Academy. In 2004 December he performed at Kenny Chesney concert. When Darrell Abbotts died, Eddie donated the black and yellow guitar that had featured on Van Halen II album as it was his favorite.

He also appeared as an honorary official in April 2007, after his rehabilitation and was honored in the Xbox version of Guitar Hero II. In Mid-January 2011, Eddie Van Halen presented his new Wolfgang guitars during the winter NAMM Show.