Rooster and Rabbit compatibility describes partners who are affectionate and easy to understand one another in every circumstance. In other words, finding someone who will make you happy in your life is not an easy thing. You have to take your time because that is a critical thing. More so, you have to respect some of the decisions you make because changing them can be a bit confusing. Equally, there are signs indicating that you are in the right place where you can meet your soulmate.

Are Rooster and Rabbit Compatible? Perhaps, your personality can be hard to march with someone else. Therefore you have to stop being too demanding and meet someone who will come to understand you later. A relationship is all about learning and moving forward.

The Chinese zodiac compatibility in a Rooster and Rabbit relationship will probably be a little troublesome. They might have problems understanding each other.

Will they be able to overcome these issues and be with each other for a lifetime? Or are they too different from being able to make things work in the long term? Will hard work help these two figure it out?

The two Chinese animal signs, the Rooster and the Rabbit have very different personalities. A lot of their trouble comes from seeing things about their characters. The Rabbit man or woman will see things subjectively. They are used to rational thinking and being logical.

At the same time, the Rooster man or Rabbit woman sees things in a way that is all about the details. Because of this, they see things in a certain way, such that they need to perfect these details. 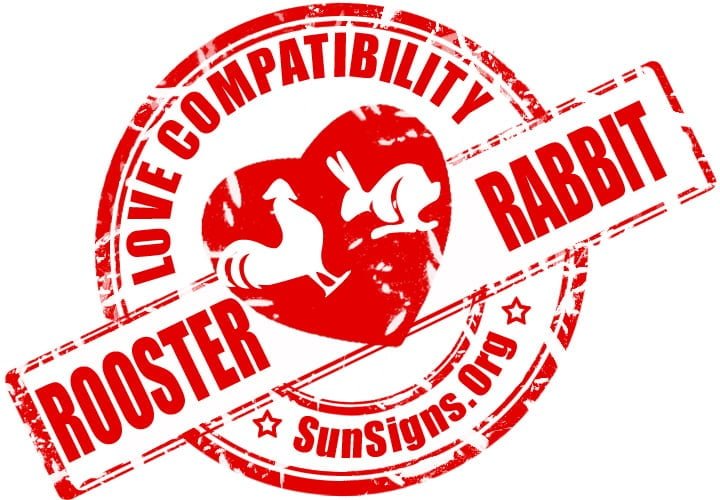 The Rooster woman Rabbit man compatibility is not very likely to work and could end in a breakup. The Rooster dating a Rabbit might see them as being too careless. The Rabbit might feel its lover is asking too much and being too judgmental. However, they are also kind and tolerant. Additionally, they are also somewhat shy and will have a hard time talking about when they feel they are being judged too harshly.

If the Rooster and Rabbit fall in love, they will likely have problems still trying to form a connection. The Rabbit is famous for putting more into their relationships than their partners do. The Rooster might not have an issue with this since they will typically throw all their energy into whatever new thing they are working on in their life.

These two Chinese astrology signs are both intelligent but different. The Rabbit appreciates solitude, especially when they are concerned about something. They will not find encouragement from their partner. At the same time, the Rooster might not take their partner very seriously and might expose what they see as the Rabbit’s flaws to those around them.

The Rooster-Rabbit soulmates will take on romance just like they do with everything else they share in their life together, in a completely different manner. When it comes to the Rooster, they will demand perfection from their partners, friends, and family members. They believe that perfection is not just something to strive for but something that can be achieved. They can be proud and self-centered. 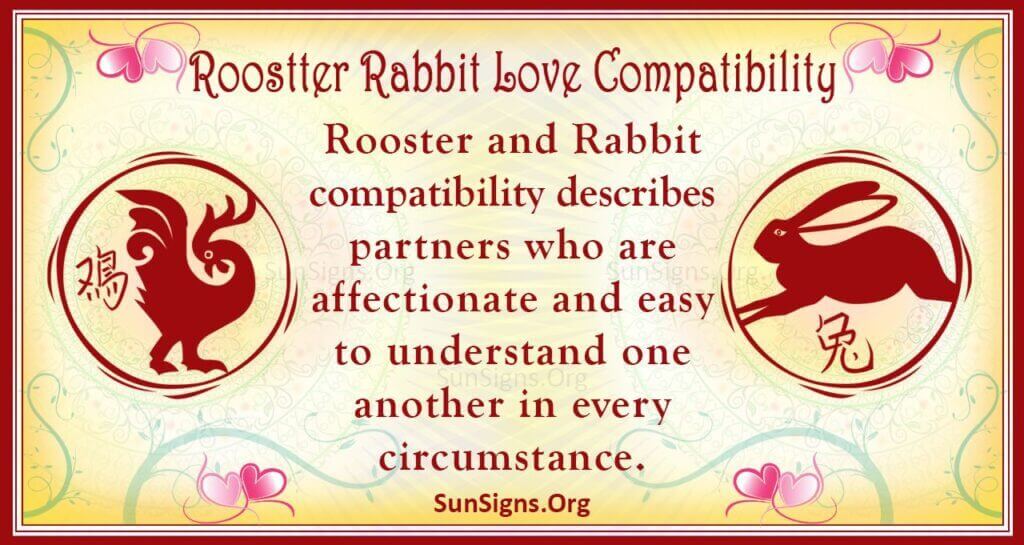 On the other hand, the male or female Rabbit depends on support emotionally from its family and friends. Their emotional balance is dependent on this encouragement to be maintained. The male or female Rooster is full of strength and more than capable of giving its lover the steadiness they need. They will be a very devoted and affectionate partner. But they are sensitive, creative, and somewhat fragile.

However, the Roosters can get too demanding. They will be too blunt and too much of a perfectionist to be able to deal with the partner’s more fun-loving nature. Rabbits might feel too criticized and confidence slip, foretelling the Chinese astrology predictions.

A Rooster wife and Rabbit husband might see the Rabbit negatively and somewhat depressed. Both can be diligent and rational. If these two can work through the problems they might have, they could form a decent marriage.

A Rooster and Rabbit wife will see the Rooster criticizing their partner quite a bit. The Rabbit will not be happy about this, especially when the criticism is about their everyday actions. Besides, it would help if you did not criticize your partner for doing something wrong. Instead of criticism, try and teach one another because no one is perfect.

The Rooster and Rabbit’s love compatibility could be negligible, but a steady relationship is possible with little hard work and compromise. Perhaps, everyone who wants to enjoy a relationship should find someone who is hardworking. Hard work is the aspect that everyone deserves to look up to in a person. Equally, hard work will deliver you to the position that you need in your life.