Rooster and Rooster compatibility means that every relationship will matter if you are genuinely affectionate to one another. In other words, you must take time and understand what is suitable for your partner. Those who rush things mess around because they will not make straightforward decisions. More so, any rush decision shows one has personal ambitions and doesn’t care about the other partner. Equally, let your love grow within the right time, and you will live to enjoy your life forever.


Are Rooster and Rooster compatible? Similarly, people find an attraction to people who are kind and caring. So, this is a good sign that you will meet your soul mate who is willing to support you in whatever you do. On the other hand, finding someone who will truly fit in can be somehow hard, but sometimes your instincts will direct you to a better place. Therefore, it is time to pray to God to lead you to your life partner. Equally, appreciate the time you have and the person you are working and in the meantime, be honest about who you are.

This Rooster Rooster compatibility might be a tad difficult as they are too much alike to make things work very well. Can these two work through their differences? Or will it be the similarities they share that are more likely to cause them trouble?

The two born under the Chinese astrology sign of the rooster are so much alike that they will not get along well. When the rooster is dating another rooster, these two will be able to get along okay in the beginning as they begin to get to know each other. The Rooster Rooster friendship can be decent. 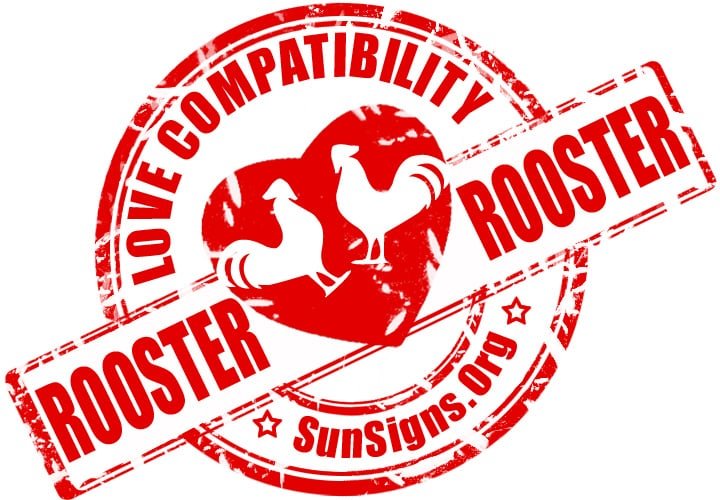 In a Rooster woman and Rooster man relationship, they will more likely be pointing out each other’s flaws rather than flattering each other. They should complement each other, but their need for perfection will get in the way. At the same time, they can be very devoted to their partners. They can be very affectionate, but their love compatibility is nil.

The rooster does not feel there is a way for them to share the control. They will each feel they are best at handling the power, and neither will be willing to let the other take it. The Rooster man and Rooster woman in love could end up annoying each other thoroughly. The most incredible thing about them is that they understand each other fast.

The rooster sees details everywhere. They also know where this meticulousness needs improvement. Perhaps, they are very analytical and use this to find weaknesses in other people. They pick those weaknesses apart and tend to demand that others change to suit their ideas of perfection. Sometimes changes might affect a business relationship because of the change in certain things.

Chinese zodiac match says that two Roosters in a friendship will be a little too much like each other to be very good together immediately. There will be control issues with these two. The rooster likes to be in charge of their home. If one has to give up control, especially to another rooster, there will be discontent. Besides, everyone should be in control of the position they are good at.

If the two Rooster soulmates can form a deep connection, the two might be able to not focus so much on each other’s negative aspects, like being too demanding. The rooster also does not put up a messy partner. They do not tolerate a loud partner either. Even in bed, the rooster man and rooster woman will want to be in control of being sexually better than their lover.

In a male Rooster female Rooster marriage, their house will be kept extremely clean when these two live together. The house will also be organized, nicely furnished, and a pretty quiet place. But their marriage compatibility is another question altogether!

Because these two are so much alike, they will disagree at some point. Both of the roosters will be loud and tend to get into arguments. If they are upset about something, they will likely hash it out immediately. They are not one to tactfully talk about what is bothering them. 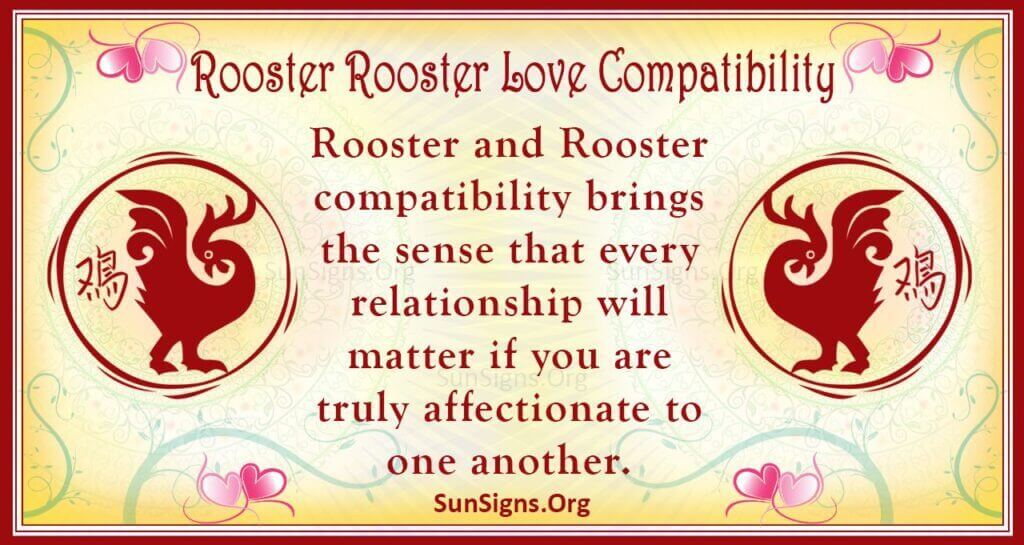 Being too diplomatic takes too much time, and the rooster does not want to feel they are wasting time. These two will begin to argue more as they continue to annoy each other, thus leading to a Rooster Rooster breakup.

This Rooster Rooster love match will both speak passionately about what they believe in. If they have opposing views, they will likely argue. Any similarities these two have will work against them. Their likenesses will help them greatly because they will be in an excellent position to offer support. Also, they should appreciate the fact that everyone is intelligent and creative.

They will have trouble deciding who belongs to whom and who controls what aspect of their lives. It seems these two are just not able to be happy together. They should probably have self-control because that is the only aspect that will sort out their indifference. Also, they must appreciate that they are suitable for each other.

Rooster and Rooster compatibility rates everyone as bright and suitable for each other. Perhaps, they need to maintain their behavior and aim higher. Besides, good behavior will always bring peace to the surrounding. Equally, everyone will be happy to meet the right person who understands more about life. This is your rightful moment to explore the world.