Rooster and Monkey compatibility represents the nature of existence whereby a relationship is a matter of finding your soulmate. In other words, it will be better to take your time while finding your partner because not everyone is perfect for you. On the other hand, there are good seasons where you can meet your rightful partner. Thus, adequate timing is necessary for every relationship. In any case, a good relationship is one that everyone is free to highlight their views. Equally, these two seasons are perfect for each other because they are both compatible.

Are Rooster and Monkey Compatible? Sometimes you need not be perfect for finding someone who will fit your life. Ultimately, your rightful partner will make you perfect because they have the ability to see whatever you lack. Therefore, being in a relationship is good healthwise because there are some things that your partner will realize and sort out. Remember that greatness is within those who understand each other, and they love each other unconditionally no matter what.

The rooster is frequently found demanding the perfection of others. They see the world in a detail-oriented way and think that there are always ways to make things better. On the other hand, the monkey dominates by being as loud as they can be. They will take more chances and will try to draw attention so that they are more likely to stand out in a crowd. 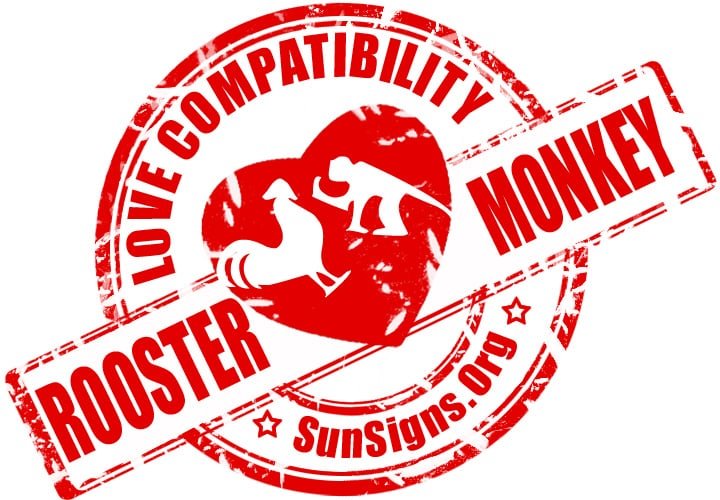 Both the rooster and the monkey soulmates will want to control the relationship. However, they will want to control it in different ways. These two Chinese astrology signs are so different that for them to have a happy relationship might just not seem possible. But as they say, opposites attract! So you never know! Sometimes it is good to be in control of your relationship and act in a rightful manner where everyone is satisfied with the results.

The rooster man and monkey woman relationship can be weird and strange. They are likely to make a connection in a social setting. The rooster will be happy to get out of the house, and they are very receptive to flattering comments. Their romance, when they are dating, will have a pretty short blissful phase. Actually, your relationship might seem weird, but to some extent, it will become one of the best. Just give everyone enough time, and all will be well.

Eventually, the rooster will start demanding the monkey change. They have trouble refraining from this kind of demanding behavior anyway. They will bug them to stop partying so much, to stop disregarding their health, to stay home more, to go to bed early, and a host of other things. The monkey man or woman by nature is curious and outgoing and will always have a chance of cheating on their partner. They might start seeing less and less of their partner, ultimately leading to a breakup.

In a rooster and monkey marriage, they are going to be more prone to demanding and criticizing. In bed, these two animal signs will try to dominate each other and sexually demand more from their partner. This relationship could be a tough one. The rooster man or woman finds the monkey’s ridiculous ways ridiculous and thinks it is too much. Consequently, the monkey thinks their lover lacks a sense of fun. In other words, every relationship will grow by being financially stable where you can visit different places. Taking an adventure is one way of having fun.

Monkey in the Year of the Rooster

The controlling aspect of both the Chinese personalities could make these two argue quite a bit. In the rooster and monkey friendship, both want their achievements recognized. The monkey likes to get their work done with as little trouble as possible. They are known for being resourceful and unique. 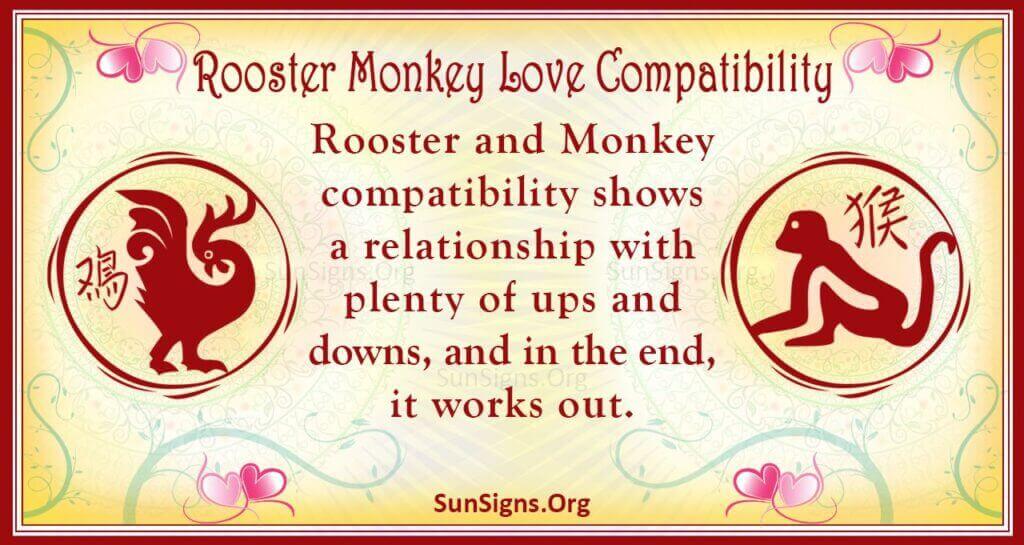 The male or female rooster is very good at being efficient but is also demanding at the same time. Actually, this kind of relationship can be unique because everyone is focused on certain areas, but they let love rule them.

Rooster in the Year of the Monkey

With the rooster seeing so much room for improvement in the male or female monkey, they will have a hard time not pointing out what they see as the negative aspects of their partner. Both the rooster-monkey soulmates will dislike the up and down pattern in this love compatibility. They will both need to stop being egotistical and try to find a way to take the middle road.

The best bet for the Chinese rooster monkey compatibility to work out is finding common ground to strive for together. This will make them want to work together. There is a chance otherwise that these two could end up arguing a lot and break up. Besides, any breakup you go through can be very heartbreaking. Perhaps, it’s time you understand that some things happen for a reason, and so it is better to let go if you see that it is not working out. You have to be strong and focus on recreating your life.

Rooster and Monkey compatibility shows a relationship with plenty of ups and downs, and in the end, it works out. Actually, the ups and downs you are facing show that you are sorting things out as you move on. Therefore, you should never give up on your relationship no matter what because you are perfect for each other. Probably, your relationship is more important in your daily life.