Rooster and Dog compatibility explains the greatness behind every successful relationship, especially those who have a kind heart. Basically, it is necessary to find someone who will be happy with what you are doing. Actually, a character is all that matters in every relationship whatsoever. Besides, someone with high integrity will understand every trouble that one has to pass through in life. Notably, ups and downs are the things you have to be ready for in every relationship.

Are Rooster and Dog compatible? Actually, when you combine two great characters, it becomes a phenomenon. That means it is a great idea to have a relationship with someone within these two seasons because they will understand each other. Equally, one has to know that not everyone is perfect, and your combination can make things perfect.

The two Chinese zodiac Rooster and Dog compatibility might have some trouble together. Is there a way for them to overcome that trouble? Can they figure out a way to make things work for them?

When it comes to the rooster, they will need to be in control of everything that they can. The dog can be strong-willed and has comparably high expectations. Can they have a successful relationship in the long term? Will they be able to compromise and be happy together? 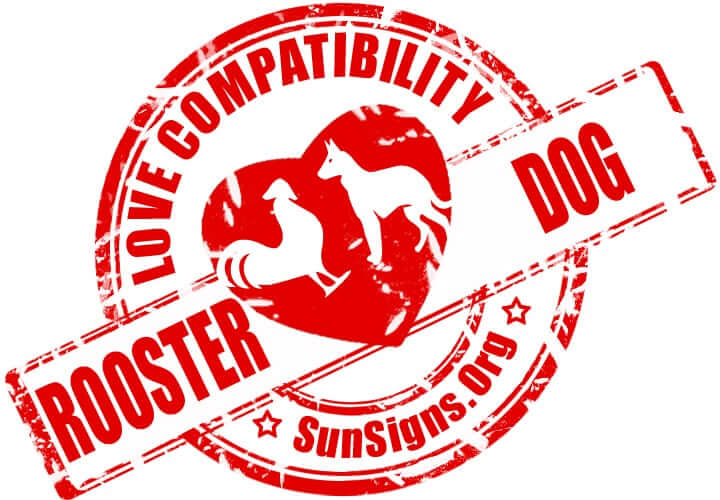 The rooster and dog compatibility will have problems when it comes to communication with each other. They will have very different interests from one another and have no love compatibility with each other. Besides, they understand that any problem is seasonal, and they can sort it out within the right time. Therefore, the combination is best for both parties because they can observe and initiate every change.

The rooster will want to control the people around them just as much as their situations. They have a smart mind, and they will be able to tell what their partner is doing. This can lead to arguments in the rooster and dog relationship. They are worried about what other people think. Due to this, they are focused on their appearance. They want everything to be impeccable, including the house. They have to be ready for anyone who might drop by unexpectedly.

The rooster’s controlling nature will extend to the appearance of their partner, also. They are just as picky about the way their partner is dressed as they are about their own appearance. Sometimes nature will direct you to the right position because you will realize you are in a safer position. Actually, nature can work things for you, but it is very systematic. In fact, it will be hard to recognize that.

This does not concern the dog in the least bit. They have a lot of energy, and they are more interested in finding something to do rather than in how they look. There are times when the dog will feel that they are upstanding, but they really might just be stubborn.

Rooster in the Year of the Dog

The rooster man dating a dog woman will both be very devoted to each other. The dog is very gracious. If they are close emotionally, there is a good possibility that they might be able to work out anything rough that might come their way.

The Rooster Dog friendship has a lot of the same good traits. They are both patient and reserved, confident, and have a lot of integrity. Neither of them is very quiet. This might not be a good thing, as they are both able to trade sharp words easily.

Dog in the Year of the Rooster

If the rooster woman is demanding, the dog man could get angry. These two might only end up hurting each other if this happens. These two Chinese astrology signs are likely to ignore the negative aspects of each other’s personalities. However, if they do not acknowledge their negative aspects, they will not find a way to improve on them.

In love, either the rooster or the dog will have to learn to back down when the other is angry. The rooster and dog as soulmates might not be so great together, even though they do appear to have a fair amount in common at first glance. A breakup of the Rooster Dog relationship will happen in the long run, predicts the Chinese zodiac compatibility analysis.

Both the male rooster and the female dog are gracious individuals, and they will normally work together to make an effort. Sometimes their more negative attributes might come out. They might criticize each other too much. Because of this, they might actually find each other’s more negative aspects highly irritating. In bed, the rooster and dog might not be sexually compatible because both want to control each other.

Neither the female rooster nor the male dog will ever back away from a challenge. This is likely to cause arguments between the two. The best thing would be if the affable dog would be happy as long as the rooster does not get too demanding. 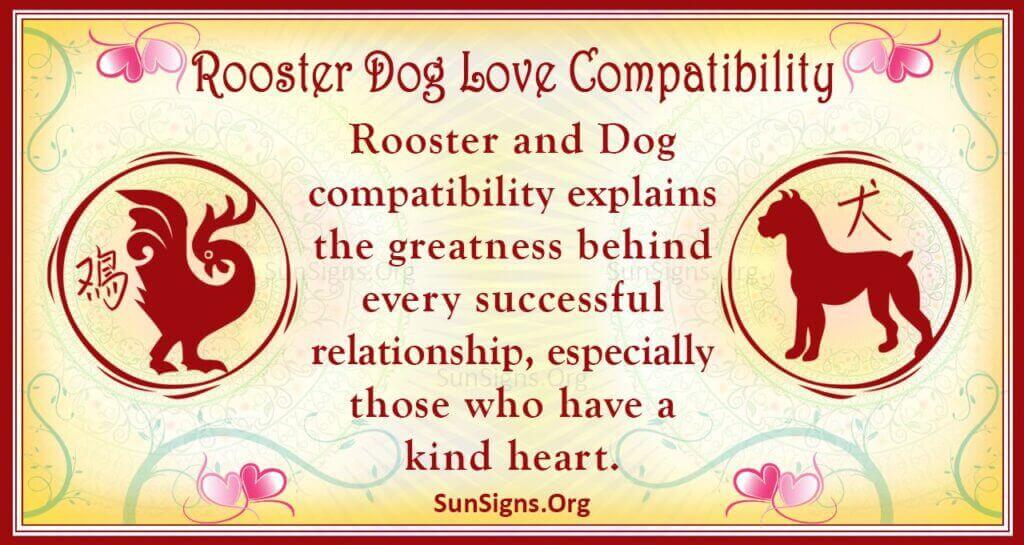 In a rooster dog marriage, the rooster needs to refrain from letting their more critical opinions out. Their unrelenting attitude when it comes to a schedule will annoy the dog. The dog will not feel loved for who they are and think that their partner wants to change them.

Rooster and Dog compatibility comprises of different characters that combine together to make a great combination. Kindness and caring move together because they understand what is best for humans. Someone having a supportive heart will move the world forward to a better place. Equally, appreciate the fact that you are in a relationship with your great friend who understands every aspect of your life. Perhaps, keep moving in the right direction and support each other.