Rooster and Pig compatibility describes a relationship whereby everyone is free to discuss everything that is bothering them in some way. That shows that the relationship is systematic, and everyone has the freedom to do whatever they like. More so, it is a show of respect because giving someone freedom is not something to tolerate with. Probably, you have first to gain someone’s trust for you to have the freedom that you deserve. Equally, let your partner be free because life is all about being happy and doing things that your heart loves.

Are Rooster and Pig compatible? To some extent, people of certain skills can make a relationship with someone of different skills. Basically, their skills can be well based on career-wise, but it can be somehow problematic if they cannot have time for themselves. Actually, focusing on your career is good, but you should also be concerned about your love life. Equally, your love life can be the foundation of creating the life that you deserve.

The pig is very sensual. They tend to be pretty laid back. Because of this, they will give in to personalities that are more dominating. Additionally, their graciousness could subdue the more critical side of the rooster’s personality. Sometimes you should not raise some of your personalities because it can hinder the progress of your partner. In other words, you lead yourself by focusing on your inner voice because it will direct you to the things you want. 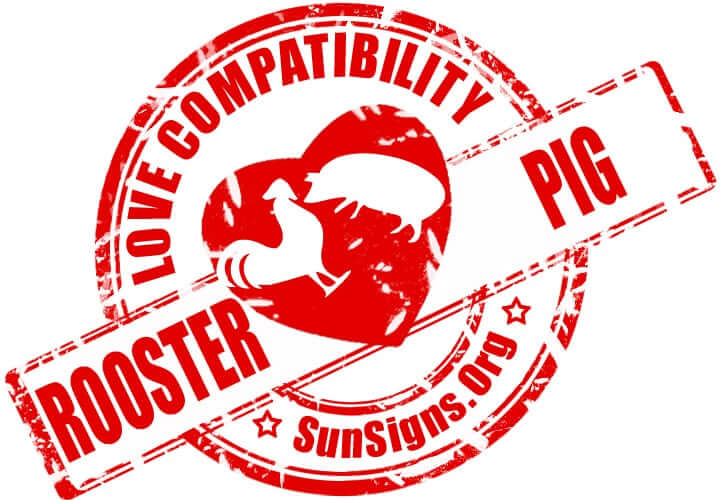 The rooster and pig compatibility will need understanding on both sides in order to have a happy relationship. Their differences are typically not able to balance each other out. But with understanding and patience, the Rooster Pig friendship will be successful. Besides, everyone deserves to become successful. Therefore, you should not only focus on your love life but also focus on your career. Notably, it is good to have a business that will generate enough cash for everyone.

The rooster dating a pig might have communication problems. These two being in a romantic relationship will probably have to depend on the pig’s easy-going nature to keep things argument-free. And when these two live together, they are very likely to have arguments. But nothing that cannot be solved.

There is something that these two Chinese astrology signs can agree on, though, and that is their devotion when they are in love. The rooster is very devoted to their partner. The pig is a giving, devoted partner. Specifically, you must teach yourself how to give generously because you will receive great blessings in general. Actually, giving is a sign of good fortune for your relationship.

The pig is gracious and does not want to rock the boat, so they will rather barely touch a subject that has a chance of offending someone. They are smart and open-minded. Besides, they can be somewhat naive, though and too trusting with others. They are easily taken advantage of. Probably, finding someone who is smart and open-minded can be somehow tough. Perhaps, these are the great seasons where you can meet one.

Rooster in the Year of the Pig

The male pig will adore the finer things in life. They enjoy lounging about, eating fine food, sleeping in a luxurious bed. They might be perceived as being lazy by the female rooster even when they are not. In fact, they are actually very diligent.

The rooster is very practical and will not be able to tolerate messes. Because they are very rational, anything other than the simple basics needed could be considered to be messy. They are dominating and have a need for control.

Basically, they like keeping everything and everyone around them neat and organized. They will feel the need to make changes to the pig’s more luxurious nature. Perhaps, they are far more rational and particular. They cannot tolerate laziness. However, the pig is not lazy.

Pig in the Year of the Rooster

The rooster does not care about offending anyone. They are perfectionists. Moreover, they do not mind accusing others and getting involved with other people’s feelings. They will be protective of their partner.

If the rooster man and pig woman as soulmates can develop some understanding and be willing to compromise, they can have a very successful relationship together. Some arguments are to be expected. If the rooster and pig in love two can learn to respect each other’s personalities and differences, then the arguments can be reduced. 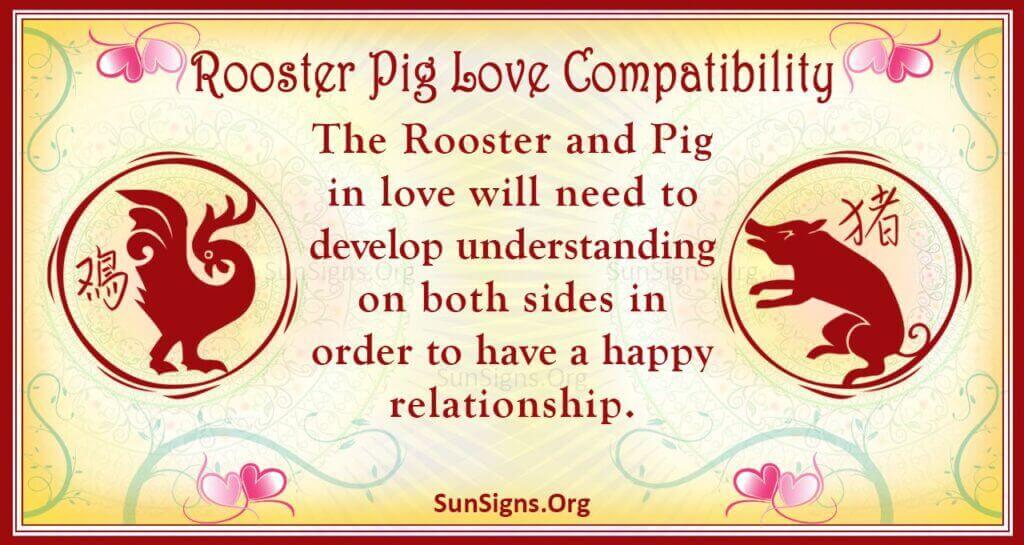 The female pig is more emotional than the male rooster will be. This might cause some issues. The rooster man is known to be somewhat disagreeable, probably too much to love the pig woman unconditionally.

On a more optimistic note, the rooster is somewhat analytical. Because the pig can be too trusting, this can help them to keep from being exploited.

Rooster and Pig compatibility illustrates that a relationship is not a matter of forcing something to happen. Basically, every relationship will work if you can give yourself enough time to understand each other well.