Chinese Rooster Horoscope Compatibility – Who Should A Rooster Marry?

Rooster Compatibility: Who is the Best Match for the Rooster Sign?

Read on to know more about the Rooster compatibility in love, marriage, business, friendship and relationships with the 12 Chinese zodiac signs.

Rooster and Rat Chinese Compatibility can be good if they learn to accept each other’s differences. The Rooster is more traditional, honest, and straightforward than Rat. Rat is more of a schemer who gets creative in how he/she deals with life and its problems. Rooster might get on Rat’s case to shape up or deal straight. Rat, however, does treat his/her loved ones right so Rooster won’t have any complaints about Rat’s generous nature. These two will have fun together, and Rat will treat Rooster right by compliments as well as comforts. Rooster, in turn, is a very loyal and loving partner.

This Chinese Zodiac Compatibility is excellent! The honorable Ox will more than meet the perfectionist Rooster’s high standards. Both are honest and hard-working. They both like to stick to a schedule. Ox may be slower to get things done than Rooster, but this is just because Ox needs to consider every detail before committing to something carefully. But once an Ox commits, they will follow through. Roosters need to make sure to compliment as much as they mention flaws (which they do) so Ox knows he/she is appreciated. The Rooster Ox soulmates won’t have to compromise much and will have an easy relationship.

Tigers are rebellious and full of energy. Tiger will probably rebel against Rooster’s strict schedule. It would be wonderful if some of Tiger’s energy and passion would rub off on Rooster. Rooster will have to be careful not to nag Tiger too much because Tigers tend to get upset. Tigers can be sensitive and do not take criticism well, and Rooster can be brutally honest. This will be a difficult match with conflict. These two will have a lot of work to get along. Tigers are loyal and compassionate to their friends and family. And the attraction will be strong here if they can make it work.

Rabbits are sensitive, emotional, and moody. Roosters can’t really understand someone who makes decisions based on intuition or emotion. Rabbits may not be able to live with Rooster’s plans and schedules. Rabbits may not be able to handle Rooster’s honesty and criticism. They won’t speak up and prefer to avoid conflict, so any hurt or anger may build. Rabbits do think carefully before making decisions and will try to agree with Rooster to avoid conflict. Rooster will have to be more understanding of Rabbit’s feelings. The rabbit will have to learn to speak up and not take Rooster’s nagging, so personally, Rooster really doesn’t mean to hurt anyone.

Now, Dragon is one sign that can benefit from Rooster’s organizational expertise and other sound advice. Dragons may be disorganized, which will drive Rooster crazy, but luckily Dragon will probably take most of Rooster’s suggestions. And Rooster will enjoy managing Dragon’s finances and other practical matters, which Dragon won’t mind. The dragon makes money but doesn’t usually save well. The Rooster Dragon together can be very successful. Dragons also receive a lot of attention and have many admirers, which will make Rooster proud. This Chinese Astrology compatibility can be great as long as they commit completely to each other!

Snake is a good partner for Rooster as per Chinese Horoscope Compatibility. Both are well-groomed and well-dressed. They will notice each other immediately and be attracted to each other also. They are both intelligent and will have exciting conversations. Snakes are calm, cool, and collected on the surface but they are incredibly passionate lovers. Snakes can be jealous and possessive, so Rooster will need to reassure him or her that Roosters admirers mean nothing to her/him. Rooster will also have to be careful because Snakes can be manipulative and cold. Once Rooster is sure Snake is devoted and committed to Rooster only, she/he can relax and commit right back.

Horse and Rooster have the potential to make a great match in Rooster marriage compatibility. The horse is very flexible and will accept Rooster’s need to maintain a strict schedule and be very organized, neat, and clean. Both of them love to learn and try new things so this will keep them entertained with one another and keep their relationship strong. At times, Rooster will be annoyed that Horse is messy, disorganized, and un-kept but their great mental and sexual connection will contribute to their long-term romance. The horse will need some freedom and independence from Rooster’s plans and arrangements so as long as Rooster understands this, they will be better off.

These two need to open up and communicate more if they want their relationship to work. Both tend to avoid conflict and this can lead to tension. They also need to be more open-minded about others’ needs, wants interests, and desires. Sheep/goats tend to act on their emotions whereas Roosters plan everything and act thoughtfully and practically. But it may be nice for Rooster love compatibility to see this world and it may help Rooster open up more. And Rooster may help Sheep be more organized or she/he may enjoy organizing for her Sheep partner! This can be a great relationship if they want it to be. 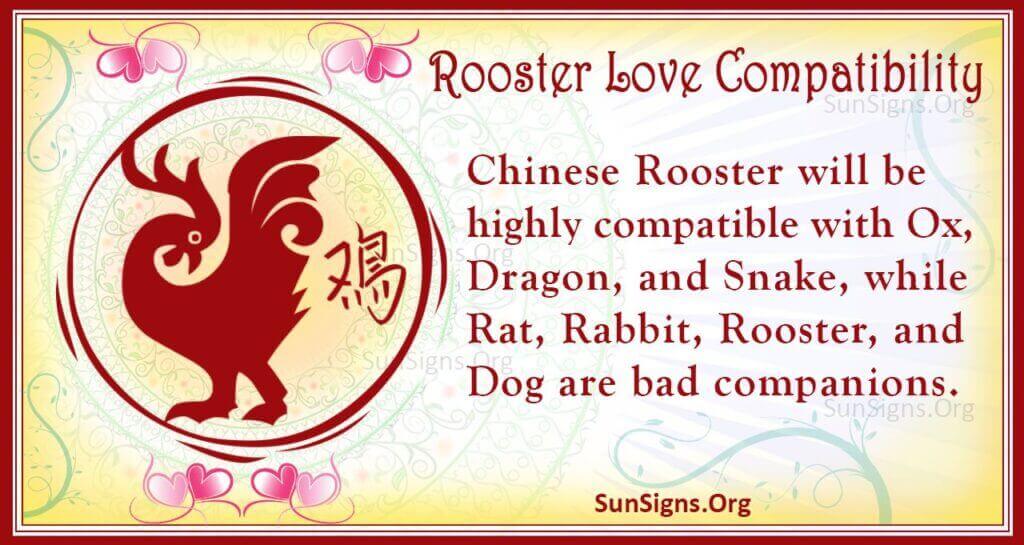 Monkey is very independent and enjoys his/her freedom. Rooster marriage compatibility likes to encourage those around him/her to maintain a schedule and be as organized as Rooster is. This may drive Monkey crazy. Monkey also enjoys meeting new people and trying new things yet for Rooster to do this it would have to be carefully planned. Rooster is also upfront and honest while Monkey can be manipulative and mischievous. This will bother Rooster. Monkeys also have trouble settling down, whereas Roosters crave stability and security. This will be a difficult combination, to say the least, but nothing is impossible. These two can get along if they understand one another’s natures and they learn to compromise.

Two Roosters together would seem like the perfect pair! However, these perfectionists can be overly critical and nag their partners to the point of unhappiness. They will have to learn to complement one another and tone down the criticism if they want to last. The Rooster man and Rooster woman will have to work on acceptance of one another and themselves. This duo will be easier if they share similar interests, goals and many they agree on the important things in their lives. Nagging on more minor interests is easier to accept and/or change. Once these two settle down and are in a more committed relationship, they will ease up and get comfortable with themselves.

The dog is very laidback and calm so this will help this relationship. Dog’s easy-going nature will help him/her deal with the Rooster’s perfectionism. If Dog allows Rooster to take care of their finances this may help also. Dog likes to spend a little too much while Rooster likes to save. Rooster should still watch out about nagging or criticizing Dog too much lest he gets discouraged and walks away. Dogs can be pessimistic so they can use a more positive and encouraging partner. Dog, in turn, should try to be more supportive and attentive to Rooster also. If these two can work on making time for one another and communicating more they will do better.

Both Chinese zodiac Rooster and Pig are hard-working and good with finances. They will work well together in the home and a business situation. Although Rooster is more aggressive, they are great at being supportive and affectionate with one another. They are loyal and will enjoy great conversation, as they are both intelligent. They may have different dreams in life but will allow one another to have that. A pig will be great at making Rooster number one in his/her life. Rooster will be assured and comforted by Pig’s attention. This can be a great match.

Chinese Rooster will be highly compatible with Ox, Dragon, and Snake, while Rat, Rabbit, Rooster, and Dog are bad companions. The year 2022 will be beneficial on the money front for the Rooster. There will be many opportunities for wealth creation.