Monkey and Horse compatibility shows a connection between two people based on their character and the role they play in the community. Basically, they both met when they were doing something good for their community. Actually, they both fall in love because of their actions. In other words, they deserve to be together because they will treat one another better. Moreover, having common ideas and common goals means that you are with your soulmate. Therefore, you need to make things straight and have a relationship because you belong to each other.

Are Monkey and Horse compatible? Apparently, they are both happy for one another because of having the same goals. It is usually on rare occasions to meet your partner who will agree and understand what you are doing. Many of them can question, but a smart person will understand. Therefore, you should never force yourself into a relationship because you will meet your partner who will fit your ambitions. Equally, never hesitate to challenge yourself in a relationship; maybe you are on the right track.

Though the Chinese monkey man and horse woman signs are similar in nature, will their similarities prove to be too much for them to make it work in the long term? Can they find a way to work around any disagreements they might have? Will compromise and understanding be able to help the monkey and horse compatibility at all? Besides, it is good to believe in nature because it will place you in the right position. Equally, accept any challenge in life because you are strong enough to resist when things turn around you.

The monkey man or woman will not hesitate to accept a challenge. Any competition between these two might cause the horse’s restless nature to become apparent, and they will move on, much to their partner’s surprise. The horseman or woman does not like staying in one place for too long as it is, so any provocation could push them to leave sooner than planned. 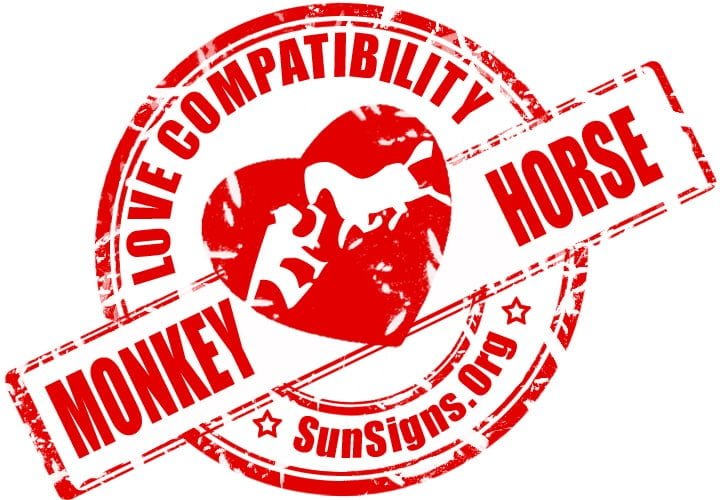 The Chinese zodiac signs of the monkey and the horse might be too much alike. They should be able to get along okay for a time, but that might not be able to carry them through. In the monkey man and horse woman relationship, both are entertaining with lots of energy and adore stimulation. When they are dating, competition between these two might become an issue because both love the spotlight. Sometimes you can be in competition with someone in dating. Notably, when someone is rightfully yours, no one will take them from you.

The monkey will always want to go after their own pleasures first, but they aren’t as erratic as the horse can be. The romance between these two Chinese astrology signs will certainly be a lot of fun and be full of energy. The problem is that they might not last very long. The monkey-horse compatibility in bed, too, cannot be sexually satisfied. Sometimes you should not only focus on how good they are in bed but also focus on how stable they are financial. Basically, when you are both business-oriented partners, then your lie will run smoothly because you will be satisfied in every place. Equally, you should not focus on one area but focus on different backgrounds.

Monkey in the Year of the Horse

The monkey probably will not have any issues with their lover. They are lively and outgoing and have a tendency to cheat on their partners. Horses like to jump into relationships headfirst. They enjoy the idea of being in love, but this does not stop their interest from changing. When they change their mind, they are ready to break up the money-horse friendship and do not generally want to stick around to work things out. They are wanderers by nature, and if they get the urge to move on early, their lover might not even have time to cheat on them.

Horse in the Year of the Monkey

Both the monkey and horse in love have the ability to be flexible and easily adapt. They are both also lively, self-sufficient, and rational. They could easily work together thanks to their tendencies of being very bright and having a lot of strength. These two will understand the need to have a balanced relationship and can learn to coexist pretty well. They can be flexible enough and smart enough that they can overcome any troubles that come their way to reach their goals.

While the male or female horse is rational and takes advantage of opportunities, the monkey can be deceptive. The male or female monkey is adjustable and talented and might find the horse annoying because of its temperamental trait. These two will have a hard time understanding and tolerating each other’s differences. Notably, never tolerate nonsense in your relationship and focus on serious matters.

For the monkey and horse marriage compatibility to be successful, they will have to put their love of the spotlight away. Chinese zodiac compatibility predicts that compromise will help these two share good love compatibility. 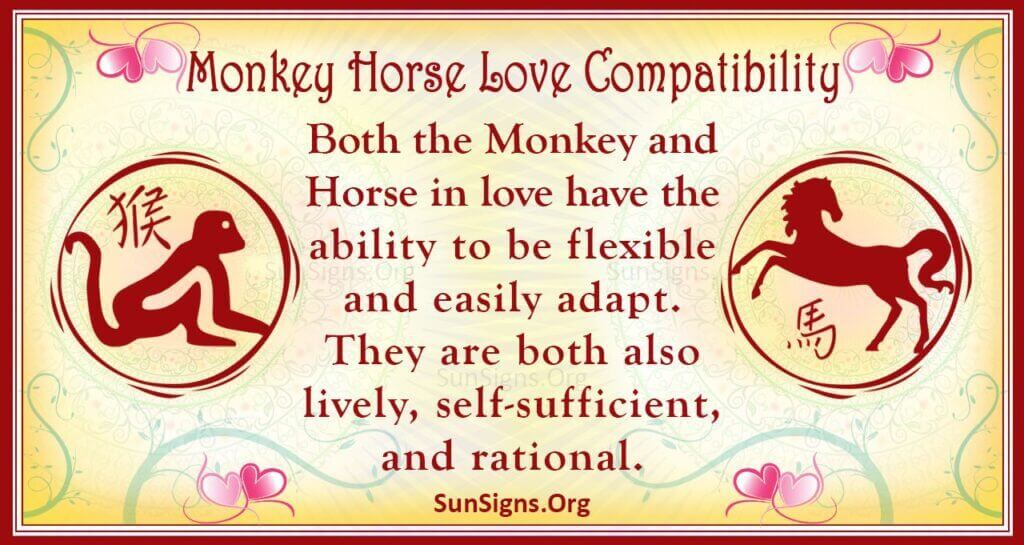 But they are going to need a lot of it if they want to have any way of making their relationship long-lasting. Understanding should go a long way to help them, but again, they will need a vast amount to make things work. The monkey-horse soulmates have a lot of things working against them because their personalities are so contrasting.

Monkey and Horse compatibility represents the perfect season one should get married because of the luck between the months. In other words, the season will suit one another because everyone within this period is ambitious and focused on their goals. Equally, it is a season of good omen, especially for those who want a serious relationship.