The Chinese zodiac compatibility between the rooster and snake is so good that they can form a pretty contented relationship.

The rooster is energetic and decisive and tends to be very on the go, living a fast paced lifestyle. They can boost the mood of the sombre snake. They will appreciate their partner’s ability to show some real understanding. But at times they might feel they are being held back.

The snake will be patient, calm, and introspective. They could also feel their lover is trying to push them into something. Both the snake and rooster are able to connect on the same intelligent level. 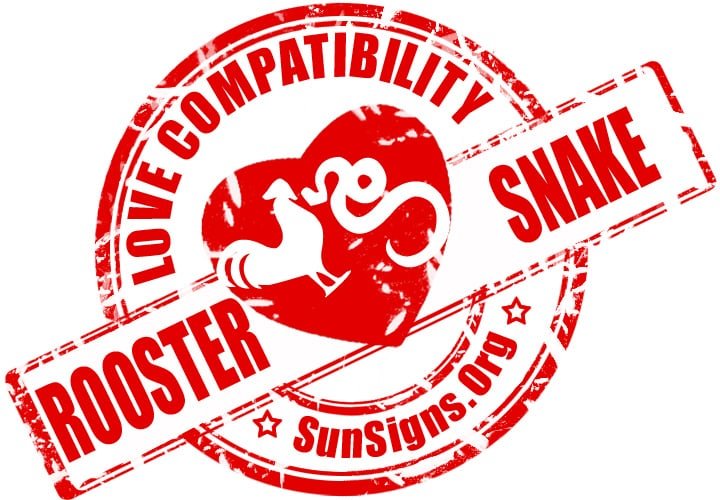 Both the rooster and  snake soulmates are social. They will satisfy each other pretty well. Very often they will share the same morals and interests.

A strong base is something the rooster and snake friendship can form no matter where they are a team, whether at home or at work. When these two are in love, they can easily form a long-lasting relationship. Moving in together early on is no problem for these two. When the rooster is dating the snake, they will both not be impulsive but practical. They will see early on that, living together benefits them both.


The snake is well liked, charismatic, and sexy. This Chinese zodiac sign is usually looked at as being lucky when it comes to money. They are good providers. They are good with money and tend to make a very nice salary. The roosters are  detail oriented. They keep a clean, cozy, nicely decorated home. They will have great taste and are smart shoppers. The rooster man or woman appreciates a good deal. They can count on the male or female snake to take care of them and bring home the wealth.


The rooster will adore going out with their friends. However, at the same time, both can be very happy staying home. In a rooster-snake marriage, they like the security of their domestic life. These two Chinese astrology signs will be able to form a good relationship no matter what the basis as the Rooster Snake compatibility is excellent.


The snake can be envious and clingy in relationships. They will often display these traits because they have an inferiority complex. When it comes to a relationship with the male or female rooster this should not pose a problem. They will be a devoted partner, completely faithful and so the snake man or woman will have no reason to suspect anything other than exactly that. In bed, the rooster and snake sexually complement each other.

In the Chinese zodiac relationship between the rooster and snake couple, they both enjoy material things. They will both have a significant mental attraction to each other. Additionally they will have a good spiritual connection.

The rooster and snake in love will both want the same kind of influence. They will also both strive for security in their material things. The rooster will want to demand things of the snake and might be quite talkative. The snake will put up with this for a while. Ultimately though they will depend on their own smarts to make their decisions or decide to breakup the rooster and snake relationship.

The overall Chinese Rooster Snake compatibility is very good in all aspects, be it love, work or friendship.