Chinese Rat Zodiac Compatibility – Who Should A Rat Marry?

Rat Compatibility: Who is the Best Match for the Rat Sign?

Read on to know more about the Rat compatibility in love, marriage, business, friendship and relationships with the 12 Chinese zodiac signs.

Two rats together can be a great match. They are both witty and clever. They are loyal friends and have a love for the good life. Neither is very neat and clean, but neither minds a mess too much. Any arguments will be heated and exciting but then end as quickly as they began.

They may express their love more physically rather than mentally, but this is fine with them! They enjoy stimulation – mental as well as physical and live their life in search of this. The Rat Rat couple will succeed in business, especially in areas that utilize their gifts of shrewd analysis, such as law, investigations, or accounting.

This Chinese zodiac compatibility could be a case of opposites attracting. The Ox is shy, serious, and even rigid, whereas the Rat is social and more outgoing. Both signs are loyal through and close with their family. The Rat will make the Ox feel supported and taken care of. The Rat may get the Ox to lighten up some while the Ox can provide the Rat with some stability. They may be good for each other.

As lovers, these two are dynamite and can never wear each other out. As business partners, the Ox can bring honesty and honor to the table while the Rat dazzles their clients and associates.

As per the Chinese Astrology Compatibility, the Rat relationship with the Tiger might not be the best match; they might be too competitive with each other. Both love to be the center of attention, and both have outgoing personalities. They both love to socialize, so this could keep them together. They enjoy the arts and could enjoy going out together. But they both like to have the upper hand in their relationships, so they will have to learn some give and take. They will need to iron out their differences and decide who is on top – this will be true in business and the bedroom.

The Rabbit’s sweet, quiet and subtle nature may be lost on the brash and extroverted Rat. But they both have a casual approach to relationships, and neither gets very jealous so that they can allow for ample breathing room. Both are social, but Rat more so than Rabbit. Rabbit craves more peace and stability than Rat may be able to give, so their relationship may not last.

They will have to learn from each other if their partnership is to survive. Rabbit could benefit from Rat’s optimism, and Rat could learn to be a little more giving and understanding. Both are loyal to the end.

Both the Rat man and woman and the Dragon are extroverts, as per the Chinese Horoscope Compatibility. They love to socialize and be the center of attention. Rat is selfish, and Dragon has a huge ego. Both will have to allow the other some freedom. Dragon should be careful not to be too domineering, and Rat should be more giving. The rat will allow the Dragon to take on the Dominant role and be happy to assert its own dominance in a behind-the-scenes way. Rat is thrifty and resourceful, while Dragon is kind and generous. This couple will last as long as they do not seek absolute equality from each other.

This Rat love compatibility could be hot and heavy or turn cold. The Rat may think the snake is slow and boring because the Rat is active and energetic. So the Rat may grow impatient or bored. Likewise, the Snake may tire of the Rat’s games and quick-wit as he likes to think of himself as deeper than that. However, despite their differences, these two can really come together as long as they can stop the fighting. They are both intelligent, so their arguments can be cruel. If they have mutual interests, they will be much happier.

Chinese Rat and Chinese Horse are one of the worst pairings in the Zodiac. This doesn’t mean this pairing is impossible, but it will take some work. The Horse needs more independence than Rat. Otherwise, he or she will end up feeling trapped. The horse will need to be a little more sensitive not to hurt Rat’s feelings. Also, Rat tends to hoard possessions, whereas the Horse likes to roam free. Rat plans for the future will enjoy the Horse’s spontaneity. As long as they can appreciate their differences, they can stand a chance.

Rat is more social than Sheep. Sheep likes the great outdoors; Rat would rather go out dancing or to a club. Year of the Rat people may get bored with quiet nights, and Sheep may tire of Rat’s constant need for activity. Sheep is more creative, while Rat is more business-minded and money-oriented. If they can utilize each other’s strengths, they can really help each other and work well together. The Rat will provide Sheep with a warm and comforting home. The Goat tend to worry, and the Rat can be quite tender and generous. The Sheep can also be adorable and welcoming to come home to. 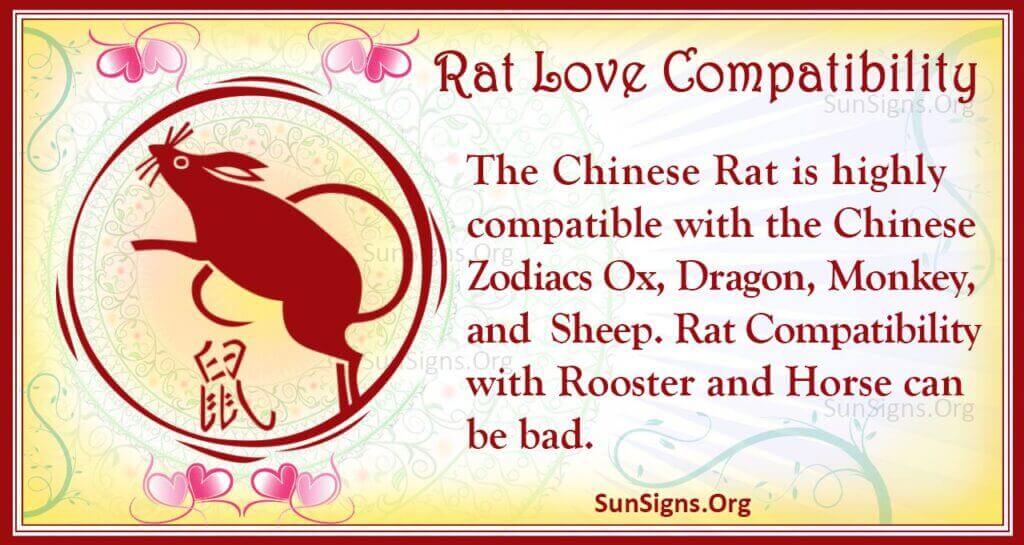 Both Rat male and Rat female and the Monkey are full of energy and love adventure. They are both social and outgoing. They may compete, but fortunately, they love to argue and be dramatic. Also, they both share of love of power and money. Monkey likes to control things, but Rat is smart enough to let the Monkey feel like the one in power while the Rat stays busy behind the scenes. Monkey does have a free spirit so that Rat will need not be jealous. A rat generally understands the need for independence, and these two have the same goals, so ultimately, they will probably be happy.

The Rooster Chinese zodiac is more honest and straightforward than the shrewd Rat, and sometimes the scheming Rat relationship compatibility may not live up to the Rooster’s standards. They will have to learn to get over their differences, or the relationship may end. Rooster will feel that the Rat is not living up to their potential. Rooster needs attention and to be admired, which is fine with Rat as long as Rooster doesn’t continually bother him about this and other duties or opinions. Rat is generous and loyal to his loved ones, so Rooster shouldn’t need to complain. As long as they can learn to trust, they can make it.

Rat relationship compatibility with Dog makes a great duo! While Dog can have mood swings, Rat actually finds this interesting. And Rat can help cheer Dog up with a night out on the town. Money can be a source of stress for these two because Rat likes to keep it, and Dog likes to give it away. They will need to find some compromise, so money doesn’t come between them. They fit together nicely in the bedroom and make each other feel good even when they are down. In a marriage, they will make great friends first and be completely devoted to their children.

Rat and Pig is another great pair – as friends, in business, or love and romance. Also, the Rat is hard working and really enjoys the fruits of his labor. Pig also enjoys financial freedom but tends not to work as hard to get it. This may upset Rat some, but they can work it out as long as he watches his tongue. Rat loves to be the center of attention, and Pig will love being a part of his group. Boar is optimistic, so he will overlook some of Rat’s scheming and manipulation, especially if Rat makes enough so that they are comfortable! They both enjoy the finer things in life, and if they marry, they will adore their children.

The Chinese Rat is highly compatible or soulmates with the Chinese Zodiacs Ox, Dragon, Monkey, and  Sheep. Rat Compatibility with Rooster and Horse is not so good, and it is average with other zodiac members.