How good or bad is the love compatibility between a Leo and Pisces emotionally, mentally and sexually? Read on…

In a Leo and Pisces relationship, it is like a pairing of the opposites. Because they are so different there can be some difficulties within the love compatibility. But they can also learn from each other as well. These two zodiac signs are likely to get a whole new perspective on life after being with each other.

Leo is an engaging sign who can catch Pisces attention with ease and teach them all that they know in a meaningful and creative way. They will crave to know their partner sign better, which can add more interest to their relationship. Pisces can be a mystery to Leo, enticing them with their unknown nature.

Leo star sign is an intelligent and creative sign. They are always trying to get ahead in the world, and this mostly involved working hard at their day job. They strive to have a position of power, as they hate it when they need to take orders from other higher-ups at their workplace. This Leo personality trait also transfers to their romantic relationships as well.

Leo birthdays will want to be the one in charge in their relationship and make all of the main decisions for his partner. Many independent signs will find this trait to be annoying, but other signs find this trait to be helpful. Leo is also a social and outgoing sign, so they have no problems when it comes to making friends or attracting a romantic partner. In fact, Leo is more likely to attract someone than being attracted by someone. This is partially because Leo’s self-confidence is so high, a trait that many signs find to be attractive.

Pisces sun sign is almost the opposite of Leo in many regards. For instance, they are a shy sign, not an outgoing or very social sign. They are likely to have a small group of close friends rather than a large group of acquaintances. This is also a dependent sign. They need someone by their side to keep them on track when it comes to many facets of their life, especially their work.

They do much better in school and at their job when they are supervised or being told exactly what to do. This means that Leo wanting to be in charge of their relationship could be seen as attractive by Pisces. Pisceans are constantly being distracted by anything and everything. It is like they have been specially trained in daydreaming. While this means that they have a hard time staying focused it also means that Pisces is a rather creative sign. 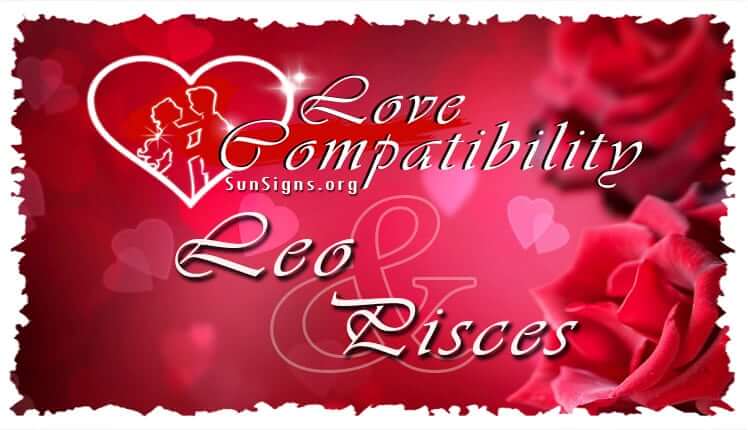 While these two seem to mainly have opposites traits is doesn’t mean that the Leo Pisces love compatibility is all bad. Let’s take a look at some of the pros of a Leo and Pisces in love.

While Pisces born people will be nervous to talk to someone who they are so attracted to, Leo will be confident as always. Plus, Leo might think that it is kind of cute that the Fish is so nervous. Once they start talking it is likely that Pisces will try their best to flirt and focus entirely on Leo. Leo will love this and flirt back. Leo is a sign that loves attention and affection, so they will be having a great time during this first conversation. Their conversation will also be able to show some of these signs’ traits to each other. Read about Leo dating tips and Pisces dating tips.

Leo will notice how smart and creative Pisces is, and Pisces will notice how confident and ambitious Leo is. In this Leo and Pisces love compatibility these two signs will be able to find each other to be all the more attractive during and after this first conversation. These two signs are likely to have a second date so that they can keep talking another time.

On these dates Leo will want to impress Pisces with especially romantic or adventurous outings, even though Leo is usually against spending his or her money so frivolously. Pisces will be shocked, but excited, at how great the dates on. However, things might be going too fast for this Leo Pisces friendship at first. Leo usually leads a fast-paced life, but Pisces likes to live life by going with the flow, no matter how slow that flow may be.

Leo will have to slow down or Pisces will have to learn to speed up if things are to work out better. The Leo Pisces in bed also have conflicting views on how sexual activities should be done. This can sometimes cause conflict in their love relationships, but at other times it can add a great amount of pleasurable diversity in the Leo Pisces sex life. Leo will want things to be physical and intense, while Pisces will want sex to be slow, passionate, and full of love.

The Leo and Pisces compatibility have many differences, which can lead to conflict in their relationship at times. Let’s look at a few cons of a Leo Pisces marriage.

One of the main problems with the Leo and Pisces soul mates will be simply what was stated before: Leo lives a much faster-paced life than Pisces is comfortable with. Pisces will always feel like they need to rush in order to keep up with Leo’s adventurous nature. Also, the Lion likes to surround themselves with friends and acquaintances most of the time, which is something that Pisces doesn’t quite understand.

Pisces men and Pisces women like to spend their time alone at home instead of at parties or bars. Even though they don’t like going out they don’t mind when their Leo lover goes out. They just wish that Leo would stay at home more with them so they could spend more time together. At time same time, Leo wishes that Pisces would spend more time out of the house with them.

In this Leo Pisces love compatibility, these two will need to reach a compromise when it comes to social situations, as well as with many other aspects of their relationships. Hopefully these two like each other enough to actually make compromises with each other. Pisces also difference from Leo because they take pleasure in simple and free things during their day, while Leo prefers things that they have to pay for and jewelry that sparkles. Pisces wants to be able to live a simple lifestyle to enjoy the small things, while Leo wants to live an exciting lifestyle full of big things.

Astrologically, these two sun signs will have a hard time when it comes to compromises on this topic. It is hard to find a middle zone that the Leo male or Leo female will feel is up to his or her standards. When things like this cannot be compromised on, the Pisces male or Pisces female may feel like they are doing something wrong in the relationship. They might feel that they are not living up to Leo’s expectations, which may be true. Read more about Pisces compatibility and Leo compatibility.

This can make Pisces feel poorly about him or herself much of the time when they are with Leo. This can lead to a steady decline in affection from and for each other. This is a relationship that may start out well, but will fizzle out over time and lead to a Leo Pisces breakup if it is not carefully attended to by each member of the relationship.

Overall, when it comes to Leo Pisces compatibility, there will be a sense of mutual attraction at first, but this needs to be nurtured as time goes on so that it is not forgotten. This relationship will require a lot of compromise from both sun signs if it is to work out.

According to love horoscope compatibility, Leo needs to work on slowing down their pace of life. And Pisces needs to learn to feel more comfortable in social situations and adventurous environments. These two need to learn to share and accept each other’s passions if they wish to keep their relationship strong and steady.