How good or bad is the love compatibility between an Aries and Leo emotionally, mentally and sexually? Read on…

Aries and Leo love compatibility is one that is very interesting. This is because the two of them are blaze signs so the fire in them will be evident. Rivalry is common between this two because of the need to be the best in the relationship. Their self-esteem is at a very high level making it an issue when arguments begin.

The Aries Leo couple enjoys civility from each other as both regard each other with admiration. These two star signs are then advised to give each other an opportunity to call the shots once in a while to make sure that pressure does not affect the couple negatively. This applies in the small things like where they should buy a good pizza from.

Supremacy is common in the Aries Leo compatibility as both want to exercise superiority. Both can be very snappy and arrogant. Leo feels the need to be cherished and complimented all the time. Unfortunately, Aries tends to be less interested with this particular need.

The coquettish tendencies of Lion disturbs Aries because sometimes it’s just too much. The Aries Leo love compatibility is quit invigorating. Even with their rowdy issues, Aries looks at Leo as a mentor and consultant. It is amazing how these two can conquer their shortcomings and strengthen their bond. This couple enjoys admiration from other people and this is a plus for them as long as they respect each other unconditionally. 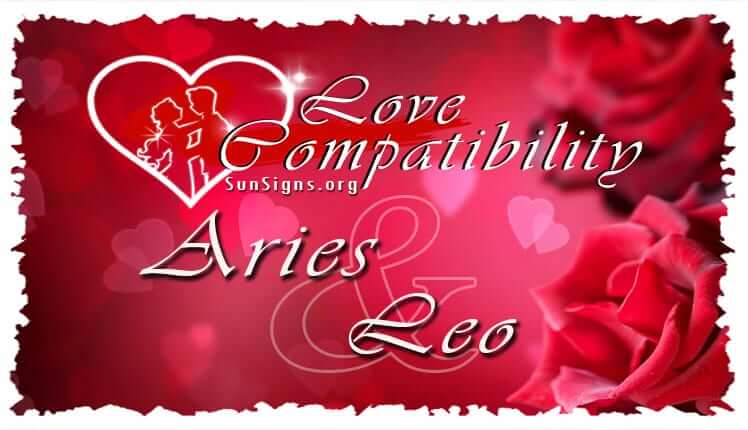 The Aries and Leo relationship is a good union because of the fact that both bring the virile aspect in the relationship. This means that they appreciate the qualities of each other as they both have a common origin. The ability to become soul mates is evident, so it is important for them to work on it.

Aries and Leo friendship is very different in the cooperate world. Aries soars high with the eagles. This comes from his/her need to be the best at everything he/she does. The Ram wants to stand out and be noticed as the wizard of his/her profession.

Leo on the other hand cares less about being the best. He/she will not do anything extra to stand out or get a promotion. He/she will only work harder on the verge of being fired or when he/she wants to prove a point to his/her lover. Aries has a duty to give Leo that push that he/she needs to want to be successful. Leo has to understand the good of being the leader or the best in what they do.

Aries and Leo compatibility makes them best friends. They care for each other genuinely and that is why they are able to talk even after a break up. They play a lot in the house chasing each other like children because of that aspect of friendship. Their companionship has more to it than just sex. Sometimes they just stay in bed cuddling. They will get late for work just staying in bed talking about life and gossiping about their crazy friends.

The plan of how they will outshine their friends in the next homecoming will not be missing in their bulletins. Their friendship is very noticeable especially in big functions where the husbands will not forget to introduce their angels. This two grow old together and even when sex is not so good, at menopause they will still enjoy each other’s company.

In this Aries Leo love compatibility, the Lion is flirtatious. Yes even more than the Ram. Leo will give attention to the members of the opposite sex oblivious of the feelings boiling up in Arian’s  heart. Aries is very possessive and gets very angry when Leo decides to strike a conversation with the youngest breed in the cocktail party. He might get hot tempered and even start a fight.

Leo is advised to slow down on all the smiling and giggling at other people during functions. Aries is also advised to remember that Leo is in love with him/her and that he/she should not feel insecure as it is; he/she is just enjoying and spreading the charm. The Lion has to remember that their lover’s feelings are on the line and all the flirting could hurt the Aries and Leo marriage.

The zodiac love horoscope compatibility predictions foretell that the Leo loves attention. They want to be seen and heard. If they buy a new outfit they will want Aries to appreciate it. If this does not happen they may become very moody.

They may even get rude considering that they are the most ruthless sign in the Zodiac. Yes this is what you are dealing with my dear Aries. So if you want to keep this Aries and Leo love compatibility live, step up and acknowledge your lover’s attempt to look good or beautiful or you will receive the cold treatment.

Leo has to start requesting instead of commanding when they are dating the Aries. They lack the ability to be polite when asking for something. He/she will demand that something is given to them. A threat will also follow that order. Aries is not the person to be pushed around. He/she also likes respect and courtesy. The Aries man or woman will refuse to do something not because of anything else but due to lack of politeness from his/her other half. Leo is advised to be very polite when asking for help or when he/she wants to purchase a sports car using the family’s trust.

The spark experienced by Aries and Leo sexually is breathtaking. In bed, the Aries Leo soul mates make sex into a very amazing episode. They enjoy each other’s company as it is exciting. This is why the two of them will get home early. On the other hand, need for supremacy ruins the relationship. They have incredibly heated arguments. The good thing is that their disagreements are short lived. There may be a little disregard by Aries but Leo is advised not to get angry over it.

Aries is cardinal sign and Leo is a fixed zodiac sign. Aries gives the Leo man or woman the green light to take control of issues. Leo pushes Aries to realize his/her dreams without stopping and changing his/her mind. Aries has a behavior of talking insensitively without giving much thought to his/her allegations which is disturbing to the Leo men and women. Aries may also be offended by Leo’s control freak tendencies. Other than that, they love and cherish each other with at most sincerity.

In this Aries and Leo compatibility, both are two pieces cut from one fabric. They are able to assist each other. In this union, Aries is the founder of ideas and Leo’s big job is to see that those ideas materialize. They use each other as tools to move forward in their lives. This Aries Leo compatibility can be very successful in their endeavors. They spend every day of their lives thanking each other for helping them realize their goals. They are a power couple.

In case you are in such a Aries Leo relationship, you are fortunate. Your life will be an adventure. All you need to do is love and care for your partner. Take time to listen and understand each other. Appreciate the vigorous nature of Aries or the needy aspect of Leo. The potential of this Aries Leo love compatibility is incredible and in order to realize it, work has to be done.