Additionally, the Chinese love match is giving a positive sign for the two. Therefore, according to the proper knowledge, the Rat Rat combination can be necessary for future purposes. The Rat and Rat friendship compatibility seems advantageous and will work based on mutual benefits and looking into the future with the hope of making it happen. The Rat and Rat married couple looks so good that you cannot imagine them not being together. The friendship between the two can help make choices that will work for the better part of life. However, positive thinking and trust will be the recipe for success in marriage.

The Rat woman and Rat man are combining to assist in making their love life more secure and essential. Therefore, the Rat man and woman rat are working smart to ensure a great life ahead of them. Each will play a role in ensuring they achieve something big. However, the female Rat and male Rat have the same properties and goals to accomplish in life. They would be willing to accept challenges in life that will not help them succeed. So, the male Rat and female Rat have basics to their friendship. It has to be helpful, and looking into business compatibility can produce good results.

The rat is the first sign of the Chinese Zodiac. The rats manage to appear relaxed and well-adjusted, but in reality, they are edgy and tense. Rats are suited well for each other as they both crave the constant intellectual companionship.

In Chinese astrology, rat zodiac signs are considered to be a symbol of fortune and abundance. A rat is defined as being quite charming, very aggressive, yet sentimental and family-oriented. While often successful and hard-working, Rats are shrewd with their money and can be unruly and messy. 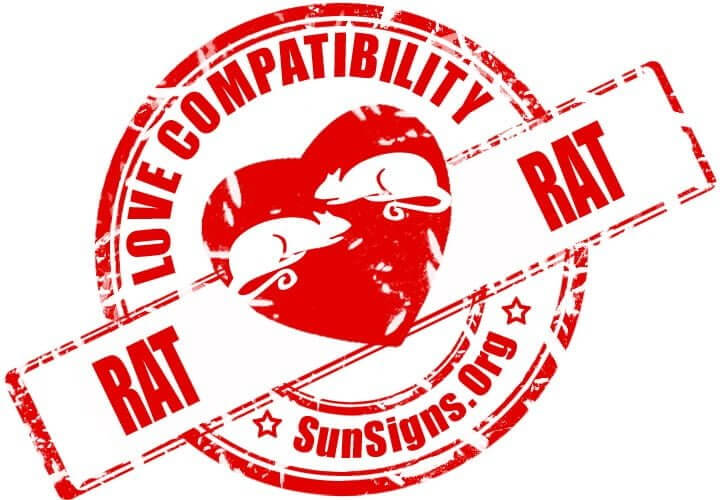 When two rats come together, they usually have a successful relationship, whether as business partners or lovers. A rat tends to be extremely family-focused. Even as shrewd as a rat can be when it comes to family and others close to their heart, they can be overwhelmingly generous.

The Chinese Rat animal sign also has a firm sentimental side has a difficult time turning down a good deal, and can often find themselves spending more money than they have. They will find that they save anything and everything that holds any sentimental value to them. Which, with two rates together, you are looking at a home filled with clutter. Don’t worry, though. Rats don’t mind a little mess or clutter. With that being said, rats need to work with one another to keep organized.

Rat man and Rat woman tend to be loyal but can get bored without excitement, which can sometimes lead to unfaithfulness. With two rats together, this should be a minimal problem as rats love excitement. Even despite problems, as long as they are not too severe, rats stick together till the end. They tend to fear being alone.

When upset, a Chinese rat person can get angry quickly and spend a lot of time arguing or nagging. As long as the two rats can keep from tearing each other down during fights, they should be able to remain on good terms. Rats will also find themselves doing too many things at once, which will often lead to them accomplishing next to nothing. 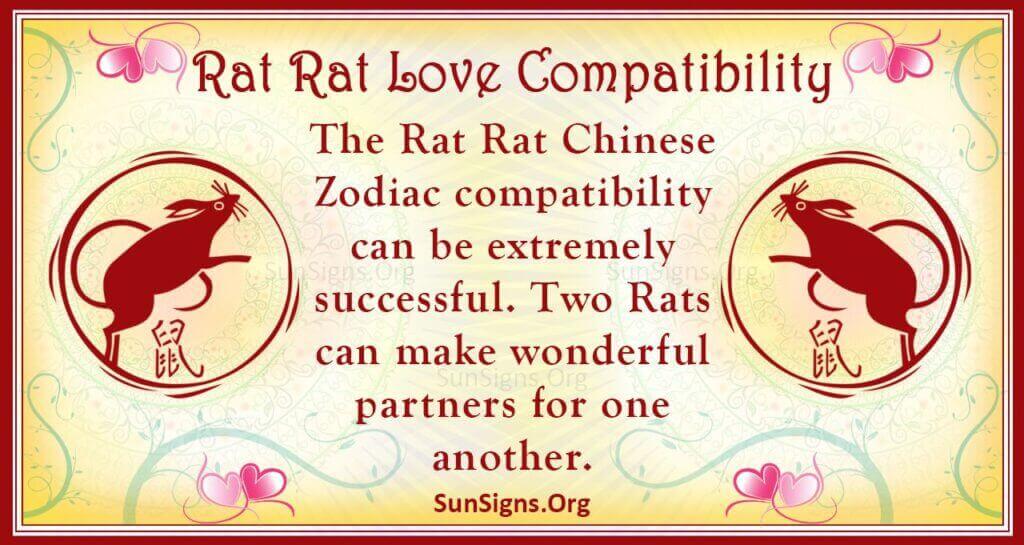 Is the current year a Good Year For Rat?

In a business relationship, the Rat and Chinese zodiac compatibility can be extremely successful. Especially if they can both learn to focus on finishing each task they begin. In general, rats by themselves can be wealthy and successful, together nearly unstoppable.

A rat needs to be stimulated by discussions and new ideas. If a partner lacks this ability, it won’t last. Chinese Rat animal signs have difficulty attaching and confining themselves to one person if they cannot stimulate the rat’s extreme curiosity and need for excitement.

The thing about rats, though, they do have the ability to settle down and remain true to one partner. Once they find their soul mate, it’s still the end. These are all reasons why rats make good companions for each other in love and sexual compatibility.

While the rat’s impulsive behavior can be great for another rat, it can become trying first. Sometimes the Rat’s impulsive nature makes it complicated to depend on one another when you never know what the other will do.

This can make a living together more complicated than just dating, as living together almost relies on monotony. Again though, if the Rat male and Rat female find their true soul mate, rats can settle into the family life and monogamy. Two Rats can make wonderful partners for one another.

Rat and Rat Chinese zodiac compatibility is a good idea to share what the future holds for them. But having confidence and sharing success in life will be important in everything.