However, Rat man and Dragon woman express the need to have control over anything that might affect good progress in marriage. On the other hand, a Rat woman and a Dragon man are combinations that raise the bar of compatibility to something else. It has to consent to the female Rat and male Rat to bring the best results. Also, the male Rat and female Dragon can combine to showcase important ties in life. A good relationship can help make good progress in everything that has positive effects on the relationship.

Why Do Dragon And Rat Get Along?

Therefore, Rat and Dragon relationship is crucial in determining good fortunes and reliable relations. The availability of anything building a stable life and the positive things will rely on good bonding. Hence, Rat and Dragon are compatible based on being good friends and looking for something beneficial to both parties. The Dragon can use its creativity to spot opportunities and use the Rat to execute the right procedures for life. So, the relationship shows are working to bring the differences in the character of these two zodiac signs.

A Dragon put, is a born leader, feisty, and a perfectionist. All qualities similar to Rats, except maybe for the perfectionist, a Rat tends to be a little disorganized and often accumulates clutter.

The Rat can play off the Dragon’s crazy, intense energy and brings its own with it. The Dragon is often overconfident, quick to lose its temper, and known to have big mouths. 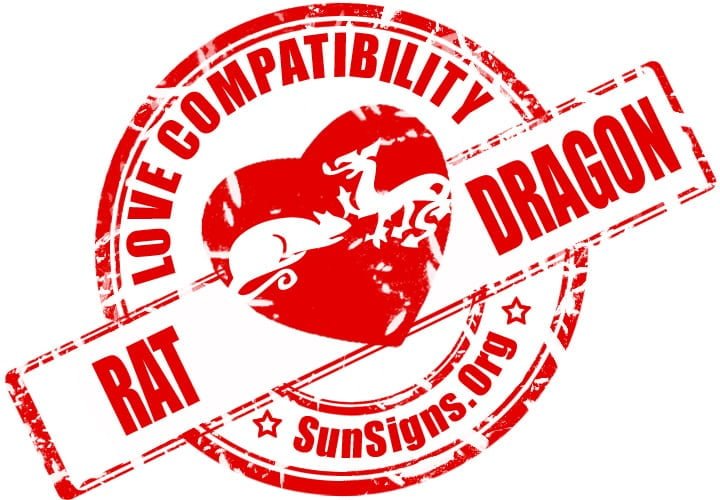 The Rat and Dragon love compatibility will work well together because they allow the other to maintain their individual freedom. These two Chinese horoscope signs can let one another remain themselves helps them develop lasting trust in their relationship.

When the Chinese Rat and Dragon come together, it is near perfection in all relationships between the two. These two Chinese animal signs unquestionably love to be the absolute center of attention, and often the powerful Rat Dragon couple is the center of their close network of friends.

A Dragon hates even a hint of a thought of growing old. Losing power for a Dragon is tremendously unbearable. The Rat’s love of the nightlife and social events and functions can help the Dragon pursue youth.

This Rat man Dragon woman relationship is a strong one in terms of love. Sexually, Rat Dragon soulmates make excellent partners in bed.

If the occasional argument does arise between the Rat and the Dragon, they will often find them a bit fun and electrifying. These little quarrels will resolve Rather quickly. 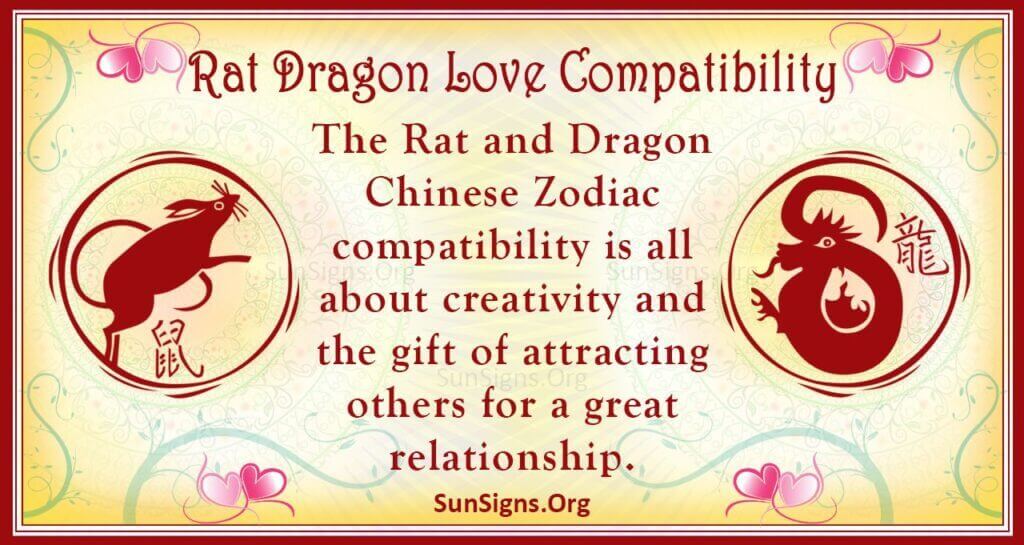 Who Is The Chinese Rat Compatible With?

The Dragon’s Rather large ego can be a problem, as the Rat has their own agenda to endorse and little time for the Dragon’s egg. The Dragon needs to learn to be less controlling, but at the same time, the Rat needs to be a little more considerate of the Dragon’s positive qualities.

In an intimate Rat and Dragon marriage or friendship, if the man is a Dragon and the woman a Rat, he is clearly the boss. The Rat female will do anything and everything for the Dragon-man but knows that he will, in return, take care of her. This pair finds it very easy to trust one another.

When a Rat is a man, and the Dragon is a woman, she will demand constant admiration from him. After enough time of this constant demand, the Rat male will become annoyed, but never enough to cause a Rat Dragon breakup.

Another small issue to arise is Rat’s money hoarding. These two will fight and then laugh their way to a resolution. The Dragon and the Rat truly share excellent Chinese zodiac compatibility.

From a business perspective, the Rat and the Dragon work very well together. The Rat knows how important it is for the Dragon to be the one in center stage. This works fine for the Rat as they are comfortable running things from backstage.

The Chinese Dragon zodiac sign hates to take orders but is intelligent and can do anything they put their minds to. This has the ability to make them great leaders.

But often, this sign is too generous, and that’s where the Rat working backstage with shrewdness comes into play. This business relationship can be very successful.

The Rat and Dragon Chinese zodiac compatibility is all about creativity and the gift of attracting others for a great relationship. Hence, compatibility in love and friendship is something important.

Share
Previous Sheep And Pig Compatibility: A Family Affair
Next Angel Number 8768 Meaning: Giving Thanks For The Little