Monkey and Monkey compatibility is a relationship where both parties have equal character and are focused on the same things. They love doing the same things, like traveling and exploring the world. In other words, they are complete and perfect partners for each other because they belong to the same group. Besides, what they are interested in can be different from other people, but they see the fun with them. Therefore, you should leave them alone to do what they want because they deserve each other.

Are Monkey Monkey compatible? Everyone will connect to the person they are in love with. Besides, love will always take center stage in every relationship and will determine whether every relationship will last. Perhaps, love is always generated by the kind of things that you usually do and both love doing. Everyone will have different interests, but your type of interest with your partner is other. Equally, you will create a unique kind of relationship that you are happy with and have no excuse to make it to anyone.

When two of the same Chinese zodiac signs get together, there is always a question of whether or not they are too alike. Will the Monkey-Monkey compatibility in this relationship be able to make it work in the long term? Will the Monkeys’ potential to cheat on their partners hurt this relationship? Can they understand each other better than others?

Two individuals born under the Chinese zodiac sign of the Monkey can have a lot of fun together. They have a lot of energy, and they are very invested in searching out the things they find pleasure in and being daring. The two Monkeys must learn to focus on each other rather than on themselves. Probably, it is good to care for everyone around you because you all face the same things in life. 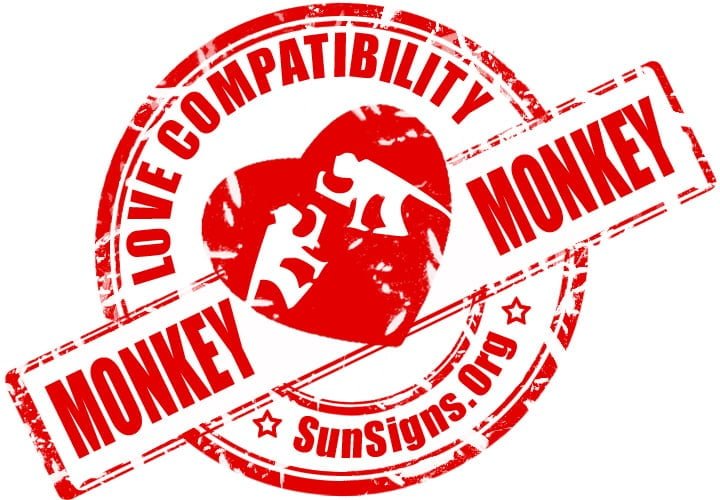 In a Monkey Monkey friendship, they both end up having twice the fun of all these traits. There is a chance they could get into some arguments. Both will like to be in the spotlight and enjoy showing off, even to each other. Their opinion is different because people may think you are breaking up the next minute. Seemingly, you do so because you do not see if it is a big deal, but it is something huge for others.

When controlling the Monkey Monkey relationship, there might be some power struggles. However, neither will be interested in being mad at the other for very long. That kind of anger takes up their time and energy that could be better spent on other things. Besides, it is necessary to control your anger all the time because everyone is not perfect.

Fights between these two Monkeys dating each other can be intense and complete, covering a lot of ground. But the wars will end quickly, and the Monkeys do not like digging up past fights. Once the battle is over, it is over. On the other hand, you should learn to be focused on your goals, and everyone should be busy with business and work.

Chinese horoscope compatibility predicts that male Monkeys in bed will be able to develop an intense, sexually satisfying connection. Their house is not likely to be very clean, but they are not expected to be home very often. It seems the only time Monkeys are at home is when they bring all their friends back to continue the party after whatever hotspot they were all at has closed down for the night.

A Monkey man and Monkey woman marriage can usually keep the interest going strong between them much longer than if they are in a relationship with another sign. Those born under the Chinese zodiac sign of the Monkey always seek out stimulation.

Even though the Monkey always has a chance of cheating because of being so outgoing and curious, it might not create such a problem in this relationship. If one of them cheats on the other, they will likely forgive each other.

This is because they understand each other’s personalities so well. The chances of a Monkey Monkey breakup are bleak. Understanding love compatibility in this partnership is essential because Monkeys might be hard to get along with other signs.

Chinese astrology compatibility predicts that the relationship between the Monkey female and the Monkey male can be long-lasting. But if either of them develops any envy, it could cause issues. They are both intelligent, but it’s more common sense than academic learning. They can accomplish way more if they unite rather than trying to compete with each other.

The male Monkey and female Monkey in love need to learn how to cooperate. Being so much alike means this relationship could go either way. They could fight a lot, or they could get along very well. Equally, every relationship with challenges will grow stronger because, with time, they will understand how to deal with them.

The Monkey soulmates should not waste time-fighting over small, pointless things. If they can remain devoted, they can have an easier time being together. Either of these two could get upset if the other flirted with someone. They are very determined and will achieve anything they set their minds to.

Monkey and Monkey compatibility illustrates a relationship that is one of a kind in terms of connection. They might be in a grave misunderstanding, but in the next minute, they are in love like nothing has just happened. Notably, be easy to understand some situations in life regardless of the size.