Monkey and Rabbit compatibility describes a relationship between two partners who are neat, hard thinkers, and intelligent. In other words, it is a kind whereby they both think about their future life because they want it to be more lively. They want to have every satisfaction in their future life. More so, they care much about each other, which is why they have high expectations about their future. On the other hand, they work hard to the extent that they are willing to support one another to strengthen that bonding.

Are Monkey and Rabbit compatible? Ultimately, both are in a relationship because they expect much from each other. First, they want to get married, and on the other side, they want to become business partners. They understand one another because they both have similar goals and are at the right age to get married. Notably, marriage is between people who are in love and are completely satisfied with one another.

The Chinese zodiac sign compatibility between the monkey man and rabbit woman tends to be naturally opposite and complex. Will these differences work in favor of the monkey-rabbit compatibility? Or will they create more problems and issues? There will be fewer problems created in such a relationship because of their understanding.

The rabbits are very caring and wise, and this is something that can be very good for the monkey and rabbit relationship. The problem is that they are very non-confrontational and more generous than their lover. Because of this, there is a good possibility they might give more in the relationship than the monkey does. The monkey man or woman does not mean to take more than they give. They have the nature of finding their pleasures first. 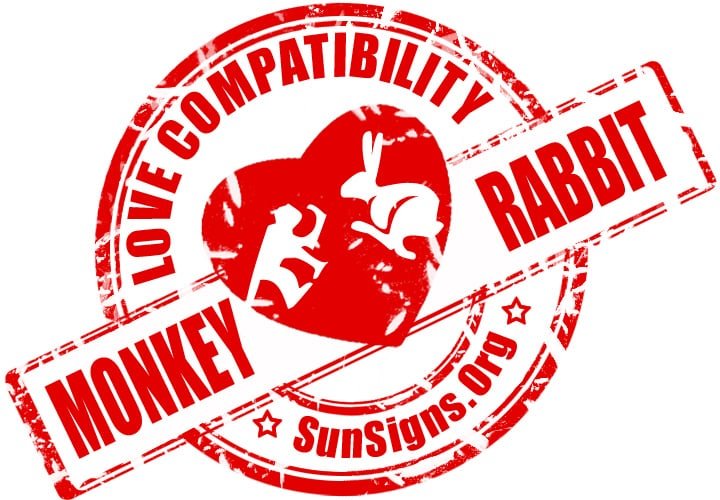 The Chinese astrology signs monkey and rabbit in love are so different that it might be difficult for them to form a connection with which they are both happy. However, with a little bit of understanding on both parts and them both working hard, they might be able to achieve that connection.

In a monkey woman and rabbit man friendship, both are interested in various things. The rabbit man or woman enjoys having social gatherings at home. They are more comfortable with a small dinner party at home. Perhaps, they are somewhat reserved socially but very loving at the same time. They like having small get-togethers at home.

While the monkey adores a good party, they are full of energy, very lively, and enjoy the things their lover does not. They thrive on groups of friends, crowds of people, loud noise, and a lot of fun. Moreover, they are more comfortable in a club setting. They love going out and will enjoy a wild night. Nothing can seem to get rid of the monkey’s extensive energy. While the monkey-rabbit soulmates can form a connection, that usually won’t be something that runs very deep or is based on similarities in the way they think.

Chinese astrology compatibility predicts that the monkey and rabbit marriage could show some signs of hate. The monkey’s ego could make its lover feel inferior. They are also annoyed by the rabbit’s worry and tendency to get lost in profound thought. Both read people reasonably well. Consequently, they might have trouble finding something intriguing about each other. The two are likely to find the best way to be successful is if they both have something to gain by being in a relationship. If they both have something to gain in business, they will both be driven to work harder together.

The monkey-rabbit compatibility can be good when it comes to friendship. However, what makes them great friends can force them apart in a romantic relationship. When the monkey is dating a rabbit, both will approach things differently. The male or female monkey needs love and encouragement to show off its good side. They do not mind a challenge. They are complex thinkers and talented performers.

The male or female rabbit is more withdrawn and does not search for things that make them happy, like their lover. They are more peaceful. They are very proper and friendly. Both the monkey and rabbit in bed can be practical. They also can do what needs to be done to keep the fire going in the sexual aspect of their relationship. According to Chinese compatibility, it takes a lot of effort to stop this relationship from a breakup.

A monkey wife and rabbit husband’s love compatibility can work thanks to their enjoyment of philosophical conversations. He won’t be fond of changes or surprises, but she likes both. He might be a little stubborn in her eyes, but she will admit when she is wrong. Besides, someone who is willing to accept the mistake they made is a good person. Equally, it is hard to meet such kinds of people. 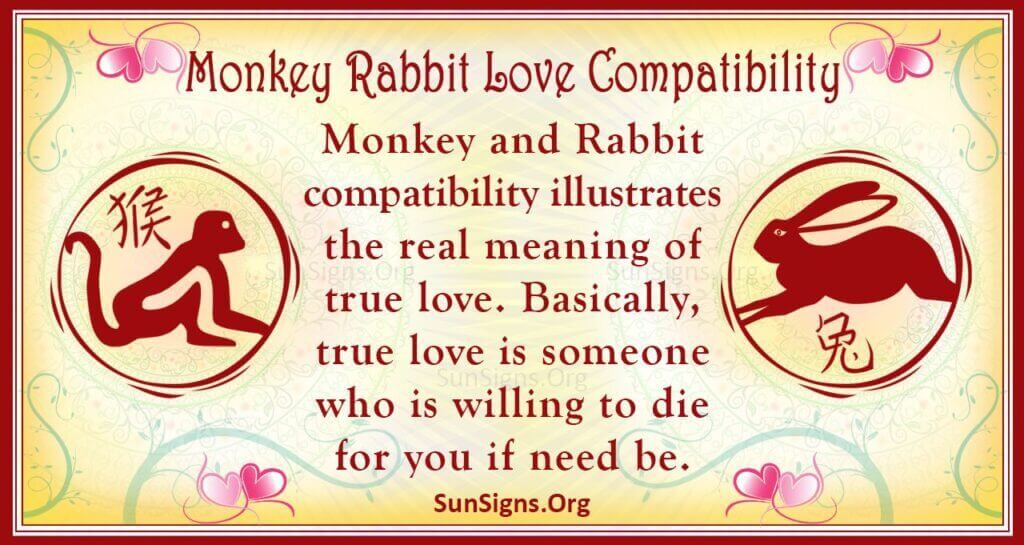 The relationship between a monkey husband and a rabbit wife is more complicated. She finds it hard to deal with his tendency to flirt. She will have to learn to be more open. He will undoubtedly show a lack of responsibility in some things but remembers a lot of what makes her happy. He might still forget some of their relationship’s significant events.

Monkey and Rabbit compatibility illustrates the real meaning of true love. True love is someone willing to die for you if need be. In other words, you are both in a relationship where you cannot leave each other because of love. Love always wins whenever you meet your soulmate because that is crucial to every relationship.