The monkey will especially adore pursuing their own enjoyments. They will be attracted by the charismatic dragon. Dragons tend to be natural born leaders. They are both driven and focused and this makes them a great couple. The male or female monkey is very talented and smart and the male or female dragon is incredibly full of energy and has a lot of discipline. 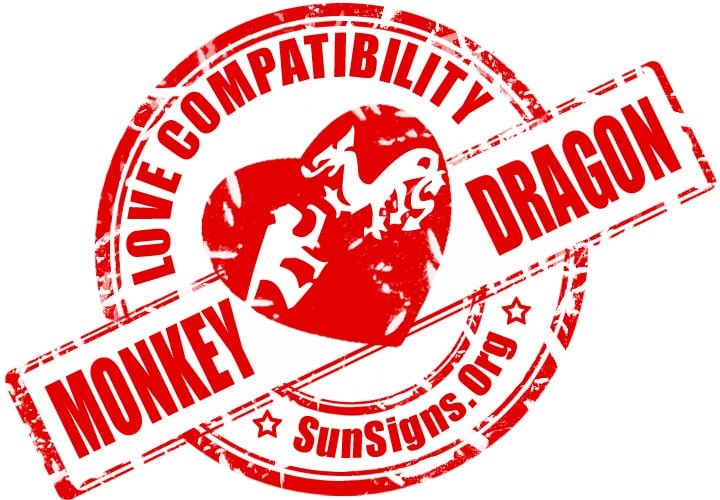 The monkey-dragon compatibility together could be incredibly exciting. They both love to explore, and this will only add to their excitement together. Both of these Chinese zodiac signs are similar when it comes to romance and intelligence and this makes them an excellent couple.

In the Chinese zodiac monkey and dragon relationship, both have a lot of energy. They are both more positive and daring and lively. They will both enjoy all kinds of excitement whether it be a party situation, an outing at an amusement park, or a fun night out on the town.


Together, the monkey and dragon in love will be able to enjoy living the kind of fast-paced lifestyle they are happiest in. They are both passionate though, so the flaring of tempers should be expected from time to time. Neither of the two Chinese astrology signs are likely to harbor anger towards each other though. They are both more than willing to talk things out and put any disagreements behind them and just move on.


The monkey-dragon compatibility is sharp when they are in love. They take their passion from everyday life straight into the bedroom and their physical relationship will be very intense. In bed, the monkey and dragon sexually complement each other. They have a lot of fun together. Living together, their house might not be pristine just because these two will rarely be home.

In the monkey and dragon marriage, neither will relish having to do boring things like taking care of laundry or cleaning the house or even cooking at home. The great thing about these two is that they are so similar neither are going to be likely to really care or even bother to notice the state of affairs as far as the house goes. The dragon man or woman will desire a place that is peaceful and homey to come to at the end of the day. However, they are smart enough to realize the monkey man or woman won’t necessarily provide them with these things.

Chinese zodiac compatibility shows that these are two individuals that will gladly work together to make sure their relationship is long-lasting and successful. Both are optimistic and driven, and have a personality that is typical of a go-getter. They are also both very attentive. In the monkey and dragon love match, both are also willing to use their full range of traits to complement to each other.

The monkey adores being challenged and the dragon is perfectly willing to encourage their lover on all sorts of endeavors. The couple will be wonderful together and will each take great care of the other one. The monkey-dragon compatibility can create a balanced life together and they both understand and appreciate each other highly.