How good or bad is the love compatibility between a Pisces and Pisces emotionally, mentally and sexually? Read on…

Need a Kleenex after watching a chick flick? Ask the Pisces couple! These natives of the twelfth sign of the zodiac are very emotional! Unlike other water signs, Pisces has no hard shell to hide behind; hence they are more likely to reveal their feelings to those they trust in this Pisces Pisces compatibility.

And who better to trust with those delicate feelings, but another Pisces! The way our little fish, the Pisces, shows affection is to care for their partner, and they do so intuitively. They watch their partner’s habits and learn their partner’s wants and needs without even having to ask. When two Pisces Pisces are in love, they create this symbiotic cycle of intuitive love and care that is truly something wonderful to behold! 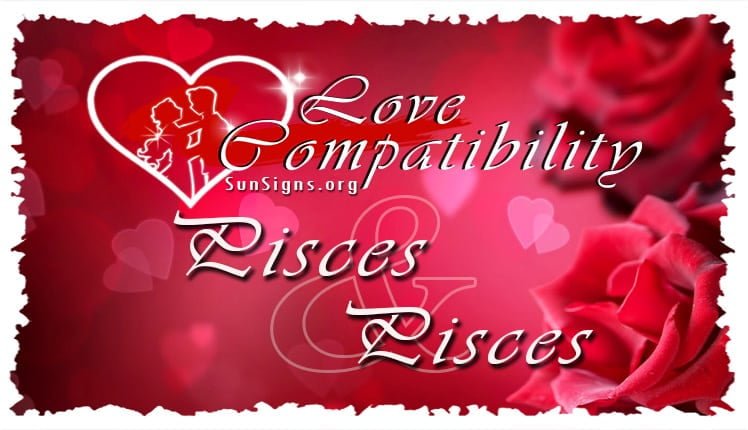 The Pisces and Pisces relationship is an incredibly dreamy match, filled with visions of white picket fences, 2 children, a pet and a two-car garage. Pisces star sign are one of the most loving and generous signs in the zodiac and both Pisces soul mates give to each other without reservation; emotionally, physically and monetarily. When a Pisces dates another Pisces and fall in love, they dream big and they both give to their partner everything they have.

The Pisces man or Pisces woman is on of the most helpful signs in the zodiac. Are you stuck on the side of the road with a flat tire? Did your babysitter cancel at the last minute? Need a shoulder to cry on? A Piscean will be the first to respond and help; regardless of whether they’re male or female. Male Pisces is definitely in touch with his sensitive side. This is good news for female Pisces, who can’t live without cuddling and making that emotional connection.

If you crave a partner who will hold your hand, kiss you in front of even his most macho buddies, go shopping with you and cuddle on the couch, pick a Pisces man. And that bond is not limited to your activities, either. There’s no gender stereotyping  in this Pisces Pisces marriage!

A Pisces man loves it when his partner builds and assembles things with him—and he doesn’t mind if the roles are reversed either! Pisces men have no problem being a stay at home dad, while their partner has a high-powered career. The Pisces and Pisces love compatibility connection is that seamless.

And speaking of connection, the Pisces Pisces in bed two make a connection that is no short of a religious experience in the bedroom. Unlike Fire signs, who rely on props and physical experiences to enhance their love making. Two Pisces sexually make an emotional connection with each other that transcends the experience of sex to something spiritual in nature.

This stems from the fact that both feel safe being vulnerable with the other. So, you may not see the fireworks on the outside, but trust me the fireworks are exploding for these two sensitive lovers. These two definitely “make love” 100% of the time, nothing can cheapen their time together. As I mentioned before, both have a deep need to be touched and held, so be prepared for hours of cuddling, spooning and pillow talk afterwards.

So if you’re a Pisces who has dreams of a family, gives and definitely needs tender loving emotional support, desires to make beautiful love with hours and hours of pillow talk afterwards? Then choose another Pisces as your partner!

Did I mention that these two little fishes were dreamy? Couple that with them both being mutable signs, and you have a recipe for disaster, inertia or both. You see, the dark side of Pisces being in tune with their emotions is the fact that they don’t often act on them, or if they don’t act on them wisely. Another aspect of this is that Pisces don’t manage their emotions well, especially towards difficult situations. This may lead to a game-changing blow out or the Pisces Pisces marriage not materializing at all.

Here’s an example: Two Pisces fancy each other, so much so that each one is bursting with affection…on the inside. Each will not want to go outright and talk but send secret messages and flowers. Here’s the problem, both Pisces lovers are so worried about getting hurt, that the signs aren’t obvious enough, and the attempt ends up being a near miss, instead of a loving relationship.

The flip side is that these ideas may come off seeming creepy, even to another sensitive Pisces. This will also breakup the Pisces Pisces relationship before it even begins! So, despite this being an excellent match, this is why we don’t see many Pisces paired with other Pisces.

Another aspect of not managing their emotions is their response to their own hardships. The Pisces personality easily blame others for their own weaknesses. Pointing the finger of blame becomes a big problem when your partner is another finger pointing Pisces. There is no outward fighting as such. But it does manifest itself in a seething rage that’s just boiling below the surface ready to burst anytime. This will definitely lead to a Pisces Pisces breakup.

Each zodiac sign has a life lesson, and one of Pisces’s lessons is to learn how to be assertive. And you can do it without fear of rejection, Pisces. For both of you, try not to pour yourself into the relationship so much that you forget who you are. And for goodness sake, when you fall in love with another Pisces, take a real risk and loose the stratagems! Many successful relationships began with a simple, “Would you like to have coffee?”

In conclusion, if these two sensitive fishes can take a risk beyond their normal evasive relationship tactics, the results are magical in this Pisces and Pisces compatibility! You’ll have a partner that will work with you in every way, without borders or stereotypes. There’s no such thing as “man’s work” or “woman’s work” in the Pisces couple’s household. And the love making goes beyond the physical to a plane that even the meditation masters rarely reach!

The key to the Pisces Pisces relationship is to understand that you’re both allowed to have your boundaries and assert them. You both need to reserve time for yourselves, once in a while, because the end result is a star sign compatibility that transcends this world and beyond.