Monkey and Tiger compatibility illustrates a relationship where both are weak at some point, but their partner will fill that space. In other words, one of the partners is financially stable but lacks someone who will give support in some other things. Also, one has a loving and caring heart that fills the other person’s missing space. On the other hand, they will not see their weakness because they are together as one. Actually, everyone is good and happy in the position they are in. Equally, a relationship that will last forever is one of a kind because everyone feels satisfied.

Are Monkey and Tiger compatible? In terms of love and understanding, they are perfect for each other. Also, when it comes to business, they are both excellent at working together. This is a relationship where soulmates meet because they are connected naturally. Notably, do your things right, and you will meet your rightful partner at the right time.

The Chinese zodiac compatibility predictions show that the monkey and the tiger in love tend to be pretty opposite. There is not much in common between these two. How good or bad will the monkey-tiger compatibility be regarding love and understanding?

The tiger has a magnetic personality, which is something the male or female monkey admires. When it comes to the spotlight, the monkey loves being the center of it. Because of this, they might start competing with the tiger man or woman for the limelight or the controlling point in the relationship. 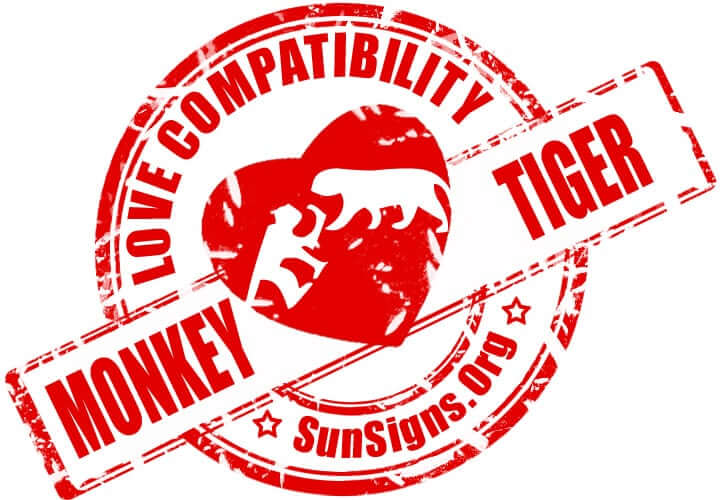 This will not make the tiger happy as they are self-sufficient and desire to be in control. They have a certain nobility that sometimes sees the monkey man or woman as impractical and brash. As the monkey and tiger love compatibility is negligible, only understanding and compromising can keep this relationship going.

In the Chinese zodiac monkey man and tiger woman relationship, both will have trouble finding things to agree on. They are so opposite that their friendship will undoubtedly be argumentative. When the monkey and tiger start dating, these two might be very attracted to each other. They are both fun-loving and pretty happy-go-lucky. But this doesn’t last long and will soon end in a breakup.

When these two Chinese zodiac signs of monkey and tiger are in love, they will be able to have a lot of fun together. However, they are also going to be likely to have arguments. The tiger has an authoritative nature that will contribute to their ideas. Monkeys are likelier to have a curious, outgoing personality and like mischievous fun. They will have a lot of fun hanging out with different groups and are not expected to mind when their partner needs some alone time.

There is a good balance between the monkey woman and tiger man’s business compatibility but zero understanding. The tiger will very often want to flee from clingy partners. They are also likely to run away from relationships they see as being confining. Both these Chinese astrology signs will go after what makes them happy, though it is different for both of them. More so, having enough money is suitable for your family because you will have everything they need.

The monkey is interested in their pleasures. The tiger is interested in maintaining its freedom. It is good for these two to stay true to who they are. Consequently, there is a significant possibility that the monkey tiger in bed will have trouble forming a sexually compatible bond. A good bonding is one in which everyone is good in bed and can satisfy each other emotionally. Equally, sexual satisfaction is one of the things that maintains a relationship.

The monkey-tiger soulmates are not likely to have a relationship that is good for either of them. These two will have some similarities, but there is no guarantee that it will go a long way toward helping them bond. They are both lively, and they both like spending money. They are both intelligent and have a lot of confidence.

The male or female tiger is not likely to find the monkey all that impressive, and they will probably fight for control in the relationship. Their main differences are in their outlooks, which foretell the Chinese horoscope compatibility predictions. They both value freedom; while one is determined, the other enjoys having fun.

The tiger is likely to feel they are putting more effort into the relationship than the monkey is. They can both be egotistical. If there is a lot of doubt in their friendship, they might keep secrets from each other. These two will have to compromise to relinquish control to keep from fighting for it in the relationship.

A monkey husband and a tiger wife might have many problems because they feel like they are competing with each other. A monkey wife and tiger husband might work a little better. Her sense of humor will help diffuse tense situations. She likes having a lot of friends. He will want her to spend more time with him than with other people. Compromise can help the monkey-tiger compatibility work out well.

Monkey and Tiger compatibility shows a strong bonding between two individuals from different places coming together. Besides, the two might have met in a business meeting where one of them seems to be the boss of a particular company. That brought the other partner’s interest because of the stability in terms of finance. It is a cool one anyway and a perfect combination.