The monkey and rooster in love are so unlike that if they were to have a relatively fight free relationship, people might find it odd. But even then, the love compatibility between them is good and if they desire, they can have a good partnership. 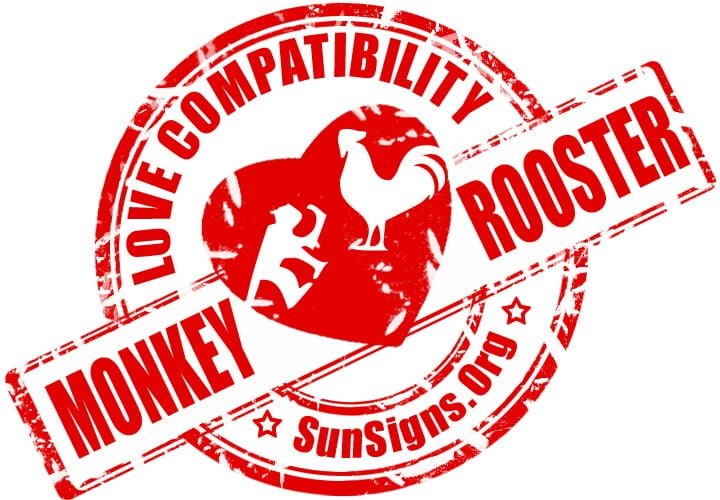 The monkey and rooster relationship will be a tough one. The fact that they are both so controlling is probably going to work against them.

In a monkey and rooster marriage, these two will have to learn to stop being so egotistical if they want their relationship to work. This will make these two want to work together to be better. If they don’t have this, they will probably argue all the time. In bed the monkey and rooster sexual compatibility will work better if they are striving for the same things.

The rooster pushes others into being perfect. They are detail-oriented and see the world in those terms. Therefore, they are likely to feel that there is a lot of room for making things better. They will feel that their partner is too loud and going overboard. They enjoy getting out of the house and are very receptive to flattering talk given their way. They know how to be efficient, but they are demanding at the same time.

At the same time, the monkey goes about it in the way of being the loudest one in the room. They will take more chances and will do whatever they can to make sure they stand out from the crowd. They find their partner to be dull and boring and no fun at all. They can be resourceful and unique.

When the monkey is dating the rooster, they will be able to form a good connection. But the happiness of the early period is not going to last long more than likely. Eventually, the rooster will lose patience with the monkey’s love of partying. The monkey rooster couple both have a need for controlling situations. However, they do this in very different ways.


Chinese zodiac compatibility predicts that there will come a point where the rooster man or rooster woman starts demanding the monkey man or woman to stop partying all the time. They will want them to start taking better care of everything, stay home more, go to bed earlier, and other things of this nature.

The monkey might tolerate this at first, especially if they are interested in this monkey and rooster friendship. But over time, their curiosity and outgoing nature will get the better of them. They will likely start spending less and less time with their lover.

The male rooster is demanding by nature and will find it hard to refrain from this kind of behavior. It will be worse for the female monkey as their partner will feel that they need to improve in more areas than one. The female rooster will see the male monkey as arrogant.

In a romantic relationship, these two Chinese astrology signs might not be very compatible. The monkey and the rooster soulmates both want to receive a pat on the back and recognition of their achievements.