How good or bad is the love compatibility between a Leo and Leo emotionally, mentally and sexually? Read on…

When two Leos enter into a romantic relationship together they are bound to have a wonderful time. Their many similarities help to drive the two together. Their shared goals and passions also help to keep the relationship stable and strong. The Leo Leo compatibility will help each other to navigate through their lives, providing support and encouragement along the way.

The Leo star sign is ambitious and determined to get what they want. No doubt, they set their goals with each other highly, as well as the goals for the grand scheme of their life. This sign knows what it wants, and it will do whatever it needs to in order to do just that.

The Leo man is a proud man, and he is aware of it. From an early age he will have felt like he was destined for something great. He will have envisioned himself in a powerful career, even if it was in a childish view of ending up as a president or an astronaut. The Leo male will want a job in which he can lead others. As a young employee he might strive to become a manager of a convenience store or have another similar job. No matter what job he ends up with, he won’t want to be taking orders from someone else.

Of course, while he is under the command of someone else he will be respectful so that he has a better chance of advancing in his job. Leo men know that being rude won’t get them anywhere in the world. He knows that the real key to success is confidence when it comes to everything in life, and he has confidence to spare.

Like the Leo man, the Leo woman is also proud of her accomplishments. While she is not as pushy as the Leo man, she still desires to get the best for herself. She will also want to be in the leader position of any job she takes on. She knows that progress can be slow, but she is willing to work hard for it. She is a determined creature as well as confident. She is also great at communicating and making new friends, which can help to guide her through her passions.

Leo women are also often creative and outgoing. They are likely to be involved in group activities, as well as having artistic side-projects. The main problem with a Leo female being in a romantic relationship with a Leo man is that they will both want to be in control of the relationship’s main decisions. The Leo Leo soulmates will need to learn to work together if they want this relationship to work out. 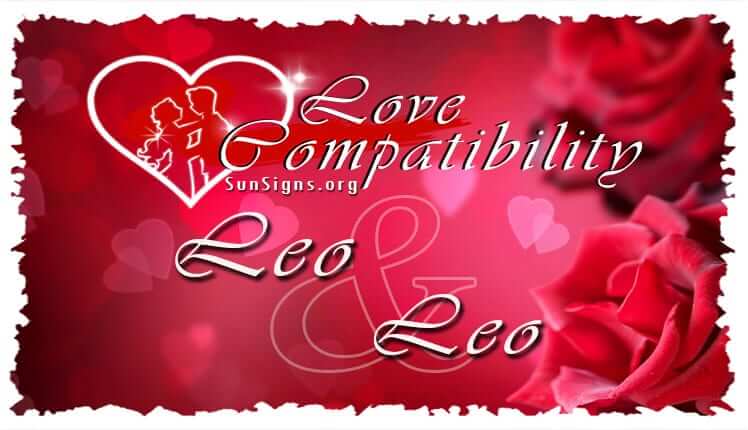 The Leo Leo love compatibility is almost destined to be great because of their similar passions and drive. Let’s look at the many pros of a Leo-Leo compatibility. These two both strive to be the best of the best. These two can admire each other because of this trait. They don’t like it when other’s don’t work to their full potential, and they are glad that they have a partner who does.

The Leo Leo in love may make their life like a sort of competitive game between each other, to see who can reach their goals the fastest. This can be fun most of the time, but sometimes it can get between the two of them. While these two compete against each other at times, they work together more often. They like to see themselves as a sort of team. It’s them against the world. In a Leo Leo friendship they love supporting each other and making sure that they stay on track on their individual goals. This couple is an extremely supportive one. Since they have many of the same goals they understand how it feels to want to accomplish them. Their similarities do a great job when it comes to bringing this couple together.

In the Leo-Leo relationships, they will also see themselves as a team when it comes to the bedroom as well. They love working with each other and pushing each other (in helpful ways of course). Both these people know what they want in the bedroom, and they will have no problem communicating that with their partner. As lovers, the Leo Leo in bed want to be able to please each other. This is the one place where they will not have problems taking orders if they know that it will result in satisfying their partner. They may take turns taking power in the bedroom, but no matter who is in charge it will be a wonderful and passionate experience. Read about Leo- Leo sexual traits.

Both members of this Leo and Leo marriage are also creative and romantic. They will be able to think of romantic dates with ease, as well as being able to surprise each other. This couple is a passionate and affectionate one. While their bedroom activities are more than amorous, their romantic life can be cute and refined. They love the finer things in life. It would not be strange to find a Leo-Leo couple out at a five-star restaurant or going to the opening show of a new theatre production. They love culture, and they love each other.

Although their similarities can make the Leo Leo love compatibility great, they can also tear them apart if these two don’t learn how to live with as well as accept each other’s similarities, then the relationship won’t last long. Let’s look at some of the cons in this Leo compatibility.

Leo is a sun sign that wants to be in charge and in the spot light. Obviously these two cannot both have sole control over the relationship without the other being unhappy about it. These two never want to be bossed around, and they especially don’t want their partner to try to tell them what to do. These two will be constantly fighting for power within the relationship, which can lead to some actual arguments between this couple. When these two start fighting they’ll keep fighting. This sign is quick to anger, and in this case it is doubled.

Both the Lions will want to “win” the fight, and they won’t want to back down until they do. Since both members of the couple thinks this way their fights can last for a long time, sometimes only pausing to sleep and then resuming the next day. Although, this astrology sign won’t want to break up because of a fight. Their fights are only so passionate because they are so passionate about each other. They will be slow to apologize, but eventually one of them will give in so that the other is happy. Hopefully they can take turns apologizing, or one member of this relationship will start to feel poorly leading to a Leo-Leo breakup.

This Leo-Leo compatibility relationship takes quite a bit of compromise to keep it running smoothly. Leos don’t like compromise in their work life, so it is doubtful that this will go well in their romantic life, something that this sign feels like they should be able to control. The Leo man often forgets that the Leo woman is as determined as him to get what she wants. Sometimes he will take her femininity as a weakness, and this will highly upset her. She isn’t one to cry, but to yell. She won’t let a Leo man think that she is soft just because she is a woman.

If the Leo man is sexist then there will be issues in the relationship. Those born with an August birthday will need to learn to work well with each other’s similarities and accept that they need to make some compromises if things are to work between them.

In conclusion, there are many pros to this Leo-Leo love compatibility. But a decent amount of cons as well. This couple will be supportive of each other, but they need to watch the competition between them to make sure that it does not get out of hand. If this Leo in love couple can work together, then they are likely to have a lively and passionate relationship.