Uranus in the Tenth House of the Natal Chart

What happens when Uranus is in the 10th House? You want to do something out of the normal but bring value to your status.

There is some conflict with Uranus in the Tenth House because the tenth House is usually very career-oriented. But Uranus doesn’t want you to be defined by your job alone. Your independent nature wants to go out and try something unique, so you often have trouble staying in one job.

Planet Uranus stands for originality, creativity, and independence. In the tenth House, you enjoy coming up with solutions to complex problems, and you excel at improving work procedures in your career. But you want to go beyond that and experience all that life has to offer. 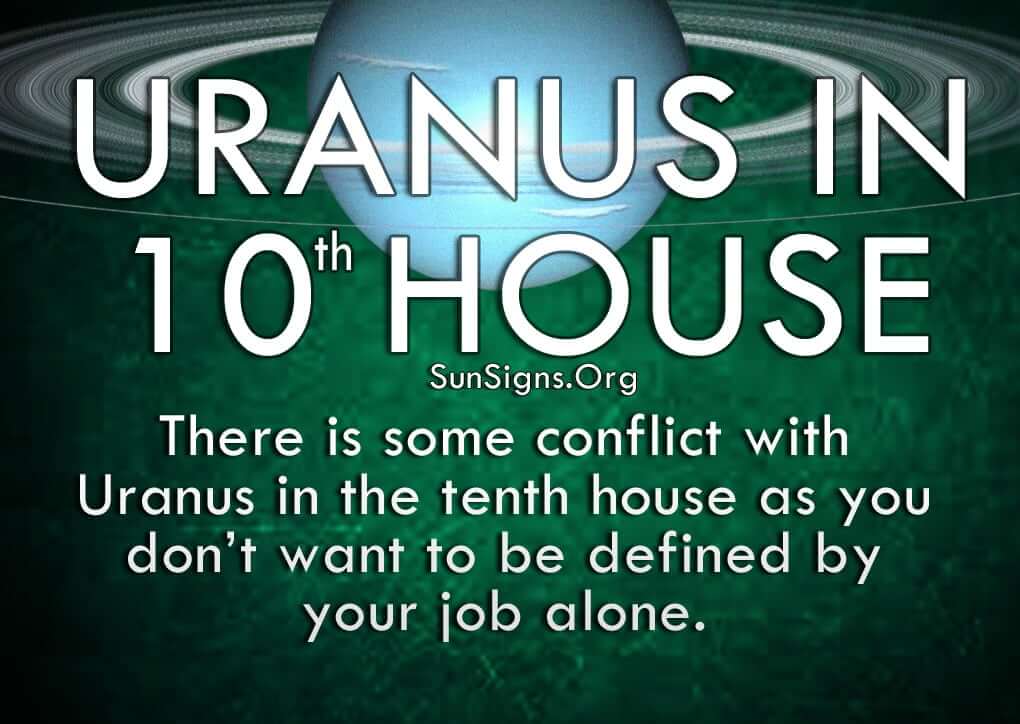 While the tenth House is known for being concerned with status, Uranus opposes that view and encourages you to throw away any thoughts of that nature. You are more concerned with creating something new and vital that stimulates your imagination and the imagination of others. You love building on past technologies and utilizing those good ideas to come up with your own. It’s more about challenging yourself than it is climbing the corporate ladder. You don’t want to play the game to play it.

Uranus in 10th house astrology predicts that you want your life and your projects to mean something and improve your quality of life continuously. This includes starting a family, although your ideas for parenting don’t match those of modern society. You want your children to be able to think constructively for themselves, not follow the herd in any way. Because of this, others may question your parenting style. At least you always have a good justification for your actions.

With Uranus in 10th House, you take your hard-working attitude and apply it to all areas of your life. This is why you may have trouble staying in one particular job because you grow bored with monotonous tasks. If you could be the boss, that might be a different story because you would constantly be putting out fires and coming up with new ideas to continue growing the company.

But even that could get tiring after a while, and you would want to break free from the confines of an office. There are plenty of unconventional jobs out there that offer daily changes and new adventures, and you have no qualms about picking an unusual line of work.

In Astrology, Uranus is the ruling planet of Aquarius. Together with Pluto and Neptune, it is an outer planet. It takes longs to revolve around the sun; therefore, it is a generational planet. This planet manifests in your life in challenging but beneficial ways.

Uranus in 10th House is in an angular house. It becomes powerful, having that it is close to the Midheaven. Uranus governs freedom, originality, revolutions, rapid changes, social justice, intelligence, and rebellion.

Uranus in the 10th House Meaning

Having a great relationship with authorities can be challenging for you when Uranus is in the Tenth House. You enjoy your independence; hence, you are not comfortable being bossed around or controlled. When someone imposes their will on you, you often rebel and do things your way.

One of the benefits of Uranus in the 10th House is that you are capable of being your own person. You are not in the business of impressing people because you adore the unique person you are. Exercise independence most times gets you into trouble with authority figures.

Uranus in 10th House marriage will do well, but some hiccups might lead to a broken family. Focus on spending enough time with your loved ones and getting to know them better because neglecting them will cause you to lose them.

Uranus in the Tenth House Careers

Is Uranus in 10th House good or bad? Uranus has a great influence on your career. Most Uranus natives are innovators and revolutionaries. This planet rules over occupations such as Computer Science, Electrical Engineering, Science and Technology related careers.

Uranus in 10th house personality don’t want people questioning their personality to change it in any way. Just because others don’t understand your unusual ways doesn’t mean they’re wrong. There is a method to your madness, and everything usually works out in the end. You may have to convince some people of this beforehand, especially if you don’t want anyone interfering in your plans.

But it’s vital if you want to continue doing things your way. You are ambitious in the fact that you want people to trust you when they don’t always understand what you’re doing. This is bound to happen as Capricorn is your ruling zodiac sign.

But those closest to you know that you have a plan and have the means to execute it. So, they will usually stand back and let you do your thing. When you have to deal with someone new, you need to be subtle and tactful in your communication.

Sometimes your stubborn nature wants you to ignore these people and go about your business. But you’ll get a better response with a softer approach, and in the end, it’ll be easier for you to get what you want.