The Mercury In Pisces: Significance and Meaning

Mercury in Pisces people are loving people who love peace and would not like to get into arguments.

The Mercury In Pisces: Personality

The preferred method of communication for Pisces in astrology involves utilizing their intuition. So with Mercury in Pisces, they focus (if they can focus) on the mood of a situation rather than the facts. They feel their way through discussions. They tell people what they want to hear.

Mercury in Pisces is very good at figuring out the tone of a conversation and will often adjust accordingly to avoid confrontation. While this may sound as if they are lying or being untrue to themselves and others, this is not the case. They don’t want to rock the boat. 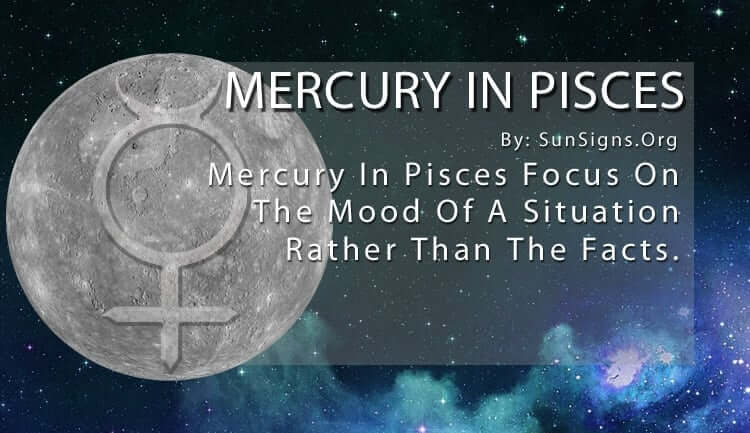 Positive Traits of the Mercury in Pisces

Mercury is called the planet of communication, knowledge, logic, and decision-making skills. For Mercury in Pisces, this means taking the necessary steps to ensure everyone is comfortable with the outcome. They are warm and caring which other people notice in their dialogue and mannerisms. And, they rely on their memory of an emotional circumstance to continue forward.

But talking with Pisces Mercury person is generally a happy occasion. They are great listeners who make others feel important and needed. They want to make everyone feel comfortable and welcome to express their opinions without any judgment.

Also, they remember things that are important to others close to them as well. They tend to care about others more than themselves. Their impeccable psychic powers allow them to see when others are upset or hurting. And they will comfort them in any way possible.

Negative Traits of the Mercury in Pisces

When learning new information, the Mercury in Pisces tend to wade through minor facts to extract the bigger picture. Thus often, they leave those minute details behind. While this helps them to process information easier, it also makes them a bit forgetful or disorganized at times.

But the way they do this is to have very little set opinions of their own. Being as open-minded as they are is helpful and hindering at the same time. While they accept all walks of life into their inner circle, they also stand for very little. This means people often try to take advantage of them and their romantic notions of how the world should work.

The Mercury In Pisces often give people the benefit of the doubt which can work for or against them depending on the circumstances. Their belief system is not as fixed as other star signs. And this can drive people crazy when they are debating with Mercury in Pisces about a particular topic.

Figuring out their stance on anything is difficult! But at the same time, this allows the Pisces Mercury person to go with the flow and maintain harmony in their lives. While this means they are a bit scatterbrained at times, they remember the things that are important to them.

The irony is that although they pick up on subtle cues more than other people, they tend to miss specific details which can also be frustrating. Mercury in Pisces has to learn to focus more on the fundamentals of each situation rather than glossing over the mundane stuff.

They have to break out of their dream state and keep their head in reality if they are to be more effective communicators. But they have to be careful not to lose their unique vision either. That is what helps to bring peace and prosperity into their lives. Without them, the world would be a dull place indeed.

Share
Previous What Is A Wicca Esbat?
Next Mercury In Aquarius Sign: Meaning, Significance And Personality Traits