The Mercury in Libra people are social people with excellent communication and mediating skills.

The Mercury In Libra: Personality

When it comes to communication, Librans are well-known to be great speakers. And that’s why Mercury in Libra is one of the most effective orators of all zodiac signs. Their balanced approach to everything in life includes making sure all those in the conversation know what’s going on.

Symbolized by the scales, in astrology, Libra is always concerned with fairness and equality. But another aspect of their personality involves expressing that kind of justice smoothly and effectively. Planet Mercury deals with how we communicate and make decisions.

So, Mercury in Libra is most concerned with diplomacy. They make great mediators for conflict and usually know the best course of action once both sides present their argument.

Positive Traits of the Mercury in Libra

As an air sign, Libra focuses on intellectual matters more than anything else. So, Mercury in Libra works best when their mind is stimulated. They have an inherent thirst for knowledge and usually make great students.

They want to learn everything they can to help with future decisions and problems. Having that kind of knowledge makes them feel more confident when others call upon them to help with conflict.

Their strength usually comes from a more abstract view of the world anyway. This is often what makes Mercury in Libra a more effective communicator – their ability to see the bigger picture.

Their intellect and analytical nature allow them to look at every aspect of a situation and visualize an outcome that will benefit all those involved. And because they have such a strong sense of justice, they can express their vision in a way that people listen. 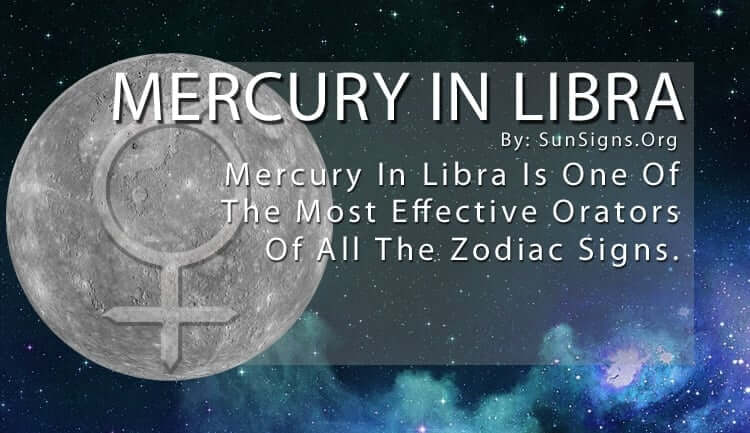 Negative Traits of the Mercury in Libra

Although Mercury in Libra people are a great help to others, this often leads to indecisiveness in their own lives. In trying to avoid one extreme or the other in a situation, they often find themselves falling into both categories at one point or another. This can be extremely frustrating for those waiting for Libra to make up their mind.

Sometimes they will defer to others so that they don’t have to make up their minds. While they are usually charming and fun to be around, this is the one area where they become annoying or defensive. It’s best to leave them alone with their thoughts at that point, for nothing will help to convince them any faster.

And if you try to force them, the Libra Mercury people will walk away without acknowledging they have done anything wrong. While they can be quite diplomatic with others in solving dilemmas, they are more stubborn when it comes to their problems. The only way to remedy that is for Libra to admit they don’t have the answer to something and move on with their life.

Understanding the Effects of Mercury in Libra

Mercury in Libra personality are diplomatic. They appreciate being able to express themselves to people in order to come out with the best outcome that suits everyone. You tend to disagree more with people because some of them do not take your ideas and suggestions seriously.

What are the benefits of Mercury in Libra? With this placement, you will be able to understand yourself better. Knowing what makes you better is important to enable you to elevate yourself and your life. Also, this placement encourages you to remain true to yourself. Do not compromise your beliefs and values to please others.

You fight do hard to achieve equality in the world. In astrology, Mercury influences your life in such a way that you become better in all you do. Forget about what happened to you in the past and create a better world for yourself and others.

Mental affinity enables you to create great professional relationships with people. You interact with people at a level of understanding and compromise. Mercury in Libra meaning reveals that you always look within yourself for answers concerning your career path if you cannot get help from your co-workers.

Mercury in Libra characteristics range from being dependable to staying true to your cause. You love your job and will do all you can to ensure that you make the best of every minute you spend doing it. Always be fair in discussions you have with people.

Mercury in Libra and Love

Mercury in Libra men and women tend to force their ideas down their partners’ throats. You should come down and allow your partner to also express themselves instead of always forcing your ideas on them. With understanding comes compromise and submission. Be on the same level with your partner, and loyalty will reign supreme.

The Mercury in Libra know how vital it is to get people to understand their point of view and sharpen that skill to perfection. If someone disagrees with them, they will argue their side until they’ve convinced you of the merit of their opinion. You may still disagree with them, but not for lack of conviction or information.

You’ll better understand where Mercury in Libra is coming from every time. And that’s why they can get their point across no matter what situation they’re in. As long as they are given time to make a decision, you know it’ll be the right one.