The Mercury in Aries people are fast and quick in mind. They will not waste their time over useless issues.

The Mercury In Aries: Personality

Being the first sign in the zodiac, Aries doesn’t wait around for anyone. This is why Mercury in Aries doesn’t waste any time getting to the point. When they have something to say, they say it, no matter the consequences. And they don’t back down when others oppose their views.

Being the trailblazers they are, Aries never holds back when they go for something they want. They are upfront and honest and don’t have time for those who don’t get behind their ideas. While this may seem brusque to some people, to Mercury in Aries, it’s just the way things have to be done. 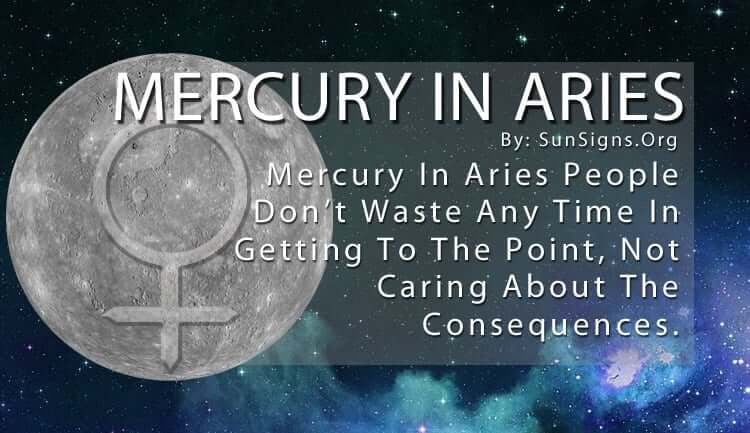 Positive Traits of Mercury in Aries

Mercury represents our style of communication and reflects how we learn and make decisions. And for Aries, their quick wit and determination is their strong suit. This means with Mercury in Aries, their incredible drive doesn’t allow them to fret over the mundane details.

They look at the facts they feel are relevant and forge ahead without concern for the ramifications. They want to get to the end result (and potential reward) as quickly as possible. The good thing about this approach is that if you need to get something communicated and started quickly, Mercury in Aries is your person. They can get things up and running in no time.

Their excitement and enthusiasm completely take over their mind, body, and soul. They don’t pay attention to what anyone else is doing. Give the Aries Mercury person the chance to create something innovative and compelling, and they won’t disappoint you. They are movers and shakers who put outdated ideas behind them and steamroll ahead into a new future.

Negative Traits of Mercury in Aries

If you’re more concerned with the daily operation and management of the project, the Mercury in Aries person will be the one bored after a short time. They aren’t as great with the follow-through as they are at the challenging beginning. They need to be constantly stimulated with new ideas and creative outlets to express their vision of the world.

Just be careful when you disagree with Mercury in Aries. They don’t understand when others don’t follow this same outlook. They can be somewhat stubborn in their approach, for they feel they have the best ideas. Mercury in Aries people can’t separate themselves from their feelings and their beliefs. So, whenever someone says they are wrong, they feel they are personally attacked.

This brings out their impatience and quick temper, which is not difficult to do when you go against their viewpoint. Mercury in Aries is very sensitive to criticism, for they have an inflated sense of ego when it comes to making decisions.

Understanding the Effects of Mercury in Aries

Mercury in Aries people think over decisions for a long time before they make them. You do not like making mistakes; therefore, you are careful about what happens to your life and how to go ahead with the same. Wise decisions make you better and bring out the best in you.

You are a go-getter. What makes you happy in life, you go for. You have no time to focus on things that matter less. Mercury’s influence in your life enables you to be a good communicator. Mercury in Aries astrology keeps you grounded and focused on things and people that will lead to your growth and progress.

Your communication is direct and quick. You have no time to beat around the bush when something pisses you off. Mercury in Aries man and woman are attracted to people that have the same values and principles as them. You do not just interact with anyone. You know which people you want to include in your life and those not to.

When it comes to your ideas, goals, and aspirations, you are aggressive. You always want to be right, but this cannot always be the case. Natal Mercury in Aries teaches you how to be open to receiving other people’s opinions and putting their ideas to good use.

Mercury in Aries personality remain focused on their goals no matter the challenges they face. You are open to making sacrifices that will enable you to get to the next level in life. Chase after your passions and use them to elevate your life.

Mercury in Aries and Love

Mercury in Aries placement encourages you to start dating. It has been a while since you allowed love into your heart and mind. The time has come for you to forget about the past and look for someone to fill your heart.

Because the Aries Mercury people are so intelligent, they often think their way is the right one. And, they will tell you so. And since they are so open and honest about everything, they don’t understand when others don’t see the same things they see. For them, it’s about creating something new and thrilling. And they want to get everyone else involved in their vision.

And with this kind of contagious attitude, Mercury in Aries often brings people on board to their way of thinking. As long as their logic is sound, and it usually is, they are able to pull off some magical and compelling moments. These bring joy and excitement into the lives of those around them. And with their straightforward approach to everything in life, they are ready to shine!