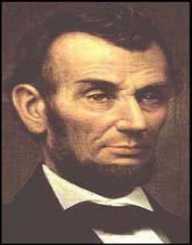 Going down the historical records of America, there is one person that you would not miss in these books; Abraham Lincoln. Born on February 12th, 1809, Abraham Lincoln rose from small humble beginnings to take up the role of the most influential man in America. He is remembered for the impact that he had on America’s soil. His influence and relevance in America’s political history are still being sung in today’s world.

Unfortunately for Lincoln, he did not live to accomplish the mission that he had dreamt for the benefit of America and the rest of the world. He is to be remembered as being a real savior of Unions and the abolishment of slavery.

Abraham Lincoln was born in Hardin County, Kentucky in a log cabin. He was the second born son of Thomas Lincoln and Nancy Lincoln. Lincoln’s elder sister was called Sarah. Thomas died while he was still an infant. Just like Lincoln, his father was a hardworking individual. He was a respected individual for the success that he had attained in the community. He was considered as one of the wealthiest individuals in the society back in the day.

The riches did not last for long as the Lincolns had to shift to Perry County as a result of a land dispute that had risen. They moved to this new county in 1817. At first, the family had to live as squatters before managing to buy the piece of land as their own.

The entire Lincoln family were quite religious, and this contributed to varying perceptions on some activities that were going on around them. For example, they had opposing views about slavery, dancing, and alcohol. Restrictive moral standards are what they believed in.

When Abraham Lincoln was still nine years old, his mother Nancy passed away on October 5th, 1818, at the age of 34. She had suffered from tremetol which is a form of milk sickness. The occurrence of these frustrating events brought some isolation with Abraham’s father. A year after Abraham’s mother passed away, Thomas went ahead to marry another wife, Sarah Bush Johnston. She was a widow with three children.

Abraham quickly bonded with his stepmother. It is through Sarah’s encouragements that Abraham began to recognize the importance of reading. As he grew older, he managed to go through his formal education. Things were not easy back in the day as reading materials were quite scarce. Neighbors recall Abraham having to walk miles just to borrow books to use for his schoolwork. Some of the books that Abraham used to read were the Bible, Aesop’s Fables, Pilgrims Progress and Robinson Crusoe.

After settling for a few years in Perry County, Lincoln’s family moved yet again. This time they were moving to Macon County, Illinois. This occurred in March 1830. Shortly after, they moved back to Coles County. Abraham could not handle the constant shifting, and he opted to stand out on his own and earn a living out of the hard labor he had been used to.

Back in the day, Abraham Lincoln was famous for his welding skills. In addition to this, there was a time when he earned a living out of splitting wood. These activities kept Lincoln healthy and physically fit. At some point, Abraham also shifted on his own to New Salem, Illinois.

In this community, Abraham earned a living from being a shopkeeper before eventually, he became a store owner. This is the activity that made Lincoln interact with the community. From here, he became famous for the stories that he used to tell his general store visitors.

In 1832, a war between the Native Americans and the United States broke out. This fight was called Black Hawk War. From the popularity that Lincoln had gained, he was therefore elected by his community to stand as their leader/captain. The Black Hawk War was an eye opener to Lincoln as he saw he could make an impact in the society. His political career took off as it took no time before he was elected to the state legislature of Illinois.

The party that he was working with during his early political career was the Whig Party. He was in favor of the politics that this individual was pushing for, i.e., protective tariffs and infrastructure sponsored by the government. From his political understanding that he gained from the start, this paved the way for his view on slavery.

Beginning of His Political Career

According to Lincoln, slavery was not precisely a moral wrong, but it was a significant obstacle to economic development. Right from the time his political career was picking up, he had the urge of becoming a lawyer. As a result, reading books on the laws of England was the only way of being good at this.

Later on, in 1837, he was successfully admitted to the bar. After this, he shifted to Springfield where he first practiced as a lawyer. He was associated with the John T. Stuart law firm.

At the time when Lincoln’s law career was slowly gaining momentum, he fell in love with Anne Rutledge. It was quite unfortunate that the two romantics never had the chance to get engaged. Shortly after knowing each other, typhoid wave hit New Salem. Rutledge did not survive this as she died at a tender age of 22. Historians argue that her death caused Lincoln to undergo severe stress. Nonetheless, some do not agree with this as they claim that the relationship was still young.

The northern United States had already been used to the fact that slavery was illegal. This part of the country had abolished slavery since 1803. On the contrary, the southern states was still fighting to abolish slavery. Lincoln’s main idea was to ensure that slavery did not spread to the West. In the 1850s, Lincoln was back fighting for his political position in the society. He majorly brought a strong opposition to the Kansas-Nebraska Act.

Abraham Lincoln strongly opposed this act because it gave settlers the power of deciding whether or not they would be adopting slavery in the West. Douglas even went to the extent of claiming that the Congress had no role to play in the slavery issue.

In 1854, Abraham Lincoln gave his Peoria speech. This speech brought to light the kind of hatred that Lincoln had on slavery. According to the statement, his main reasons for hating slavery was that it deprived people of equal rights. In addition to this, it was merely an act of injustice on innocent Americans.

During the same year, Abraham Lincoln ran for the US Senate seat. Things were looking bright at the beginning of the election before things turned around. He was defeated by his opponents just because of the Kansas-Nebraska Act that he strongly opposed.

The new Republican Party had been shaped by the anti-slavery campaigns together with Lincoln’s argument for liberty and free soil. In 1856, Lincoln came close to being the party’s chosen candidate to act as the vice president. He was the second in the nominations.

Two years later, Abraham Lincoln won the votes of the Republicans, and he was nominated for the United States Senate position. This marked the beginning of America’s famous debates between Lincoln and Douglas. During the elections, the Republican Party won numerous votes.

However, the Democrats had many seats on their side. This meant that Douglas would have to be re-elected to the US Senate once more. This did not deter Lincoln from fighting for the idea of abolishing slavery.

In 1860, political operatives in Illinois held a campaign that was in favor of Abraham Lincoln for office. Surprisingly, Lincoln defeated some candidates that were already famous with the likes of Salmon P. Chase and William Seward. Lincoln won the nomination thanks to his firm stand on abolishing slavery, protective tariffs and being a pro-national infrastructure. He won the elections after beating his rivals such as John C. Breckinridge, Douglas, and Bell. He had amassed a total of 180 votes from the total 303.

Ultimately, Abraham Lincoln was elected as the 16th president of the United States on November 6th, 1860. In 1861, he assumed office and became the pioneer of the Republican Party in position. He was not biased in choosing his cabinet as he included his political adversaries such as Salmon P. Chase, Edwin Stanton, Edward Bates and William Seward.

Not everyone was happy with the idea that Abraham Lincoln was going to give blacks the power to vote in America’s society. From a national community, people were not yet ready for the quick changes that Lincoln was about to make. John Wilkes Booth was the perpetrator of Lincoln’s assassination.

Sources claim that he had links with the Confederate secret service. The initial plan was not to assassinate Lincoln. On the contrary, he was to be abducted and kept as a hostage in exchange for Confederate prisoners to be released. Booth was aggravated by Lincoln’s speech of giving blacks voting rights. It is for this reason that he chose to assassinate him instead.

Our American Cousin was the play being screened when Lincoln was assassinated. This occurred at the Ford Theatre. Abraham had been accompanied by the first lady, Clara Harris and Henry Rathbone.

John Parker had taken the role of being the chief bodyguard as Ward Hill Lamon was not present during that time. A while later, Lincoln was left unguarded setting an excellent opportunity for Booth. He died the next day after being in a coma for 9 hours. Abraham Lincoln died on April 15th, 1865.