The Mercury In Aquarius: Significance and Meaning

The Mercury in Aquarius people have a unique way of thinking.


The Mercury In Aquarius: Personality

Known for their unconventional ways, Aquarius often comes across as strange or quirky. But Mercury in Aquarius thrives on being different from others. They argue their point almost professionally. They are confident that their point of view is the correct one. And, they will not stop until others retract their opinion.

Mercury represents interaction, logic, rationality, and intelligence. Mercury in Aquarius doesn’t traditionally do any of those things. When they are learning something new, they would rather go off on their own and research the matter using channels they feel are reliable.

This means they want an individual schedule that doesn’t depend on others for acquiring new knowledge. Others may not understand their process. But they work better by themselves. The Aquarius Mercury people often come across as a bit scatter-brained when organizing their life in general. But they have a system in place. 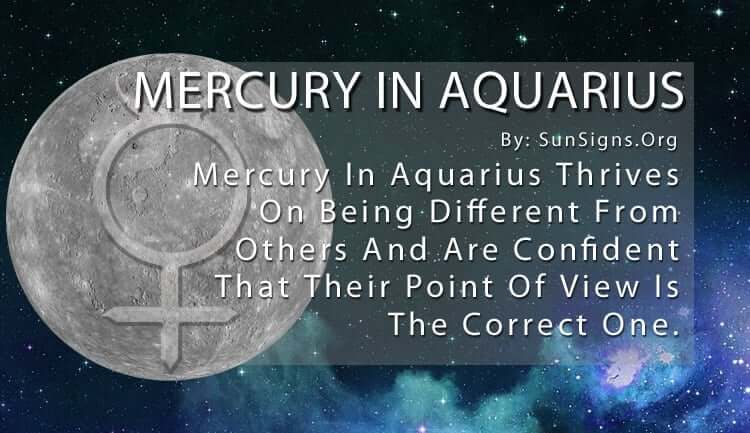 Positive Traits of the Mercury in Aquarius

This is why Mercury in Aquarius excels at a debate because they are fairly well-versed in whatever subject matter is being discussed. They don’t study anything halfway. They are always looking to increase their wealth of knowledge. Also, they also enjoy the sport of debating. And love going against an “opponent” who strengthens their conversational skills.

Every meeting with Mercury in Aquarius is stimulating. You always come away from the conversation having learned something new. They are a fountain of knowledge on a variety of topics. They always offer a unique perspective. Their creativity is unparalleled. And, their personal delivery is what makes for a fun time.

Because they are highly intelligent, they are very witty as well. They love oddball jokes and scenarios. Anything that is against the norm is accepted in their book. This means they are very tolerant of those different from them.


Negative Traits of the Mercury in Aquarius

Mercury in Aquarius remember most educational details well. But they can’t be bothered by the mundane details of day-to-day operations. Their responsibilities generally take a back seat to intellectual pursuits. This often have to do with the betterment of society or the world as a whole. Their sense of purpose is usually tied to the progress of humanity.


They don’t believe in getting emotional because they rely so much on logic to figure things out and to get their point across to others. Anything else is just a waste of time in their mind. This is why they may be misunderstood at times.

Competition keeps the Mercury in Aquarius people alert and edgy. Their primary goal is to debunk the thoughts of those they feel are just plain wrong. This can be frustrating for some. But others who also enjoy a lively discussion will not come away from experience empty-handed. And that is where their desire to further humanity comes from. Their ability to study and empathize with other people and cultures.

Though they may come across as cold or detached. In reality, they are simply trying to figure out complex problems. As an air sign, Aquarius is most concerned with mental pursuits. So Mercury in Aquarius discusses those issues the most. That’s where their passion lies, even though they usually maintain an even temperament throughout their presentation.

Those who know them best realize that their mind is often elsewhere. They are always trying to solve the next difficult problem that comes across their path. But if you can engage them in conversation about something specific, they will not disappoint as they can communicate very well.