The Mercury In Taurus: Significance and Meaning

The Mercury in Taurus people are people who love details and might need some push when it comes to communication.


The Mercury In Taurus: Personality

Slow and steady wins the race is the motto of Taurus. And, Mercury in Taurus takes their time in making decisions. Every fact, every detail, every consequence is taken into account before this astrology sign settle on the final answer. And when they reach that point, it’s usually the most practical outcome.

Mercury represents communication, learning and decision-making skills. And for Taurus, there’s no middle ground when it comes to their ideas and beliefs. They think everything through as thoroughly as anyone can. They come to their conclusions after as much deliberation as they feel is necessary. Because of this, Mercury in Taurus is extremely sure and confident in their conversation and logic. 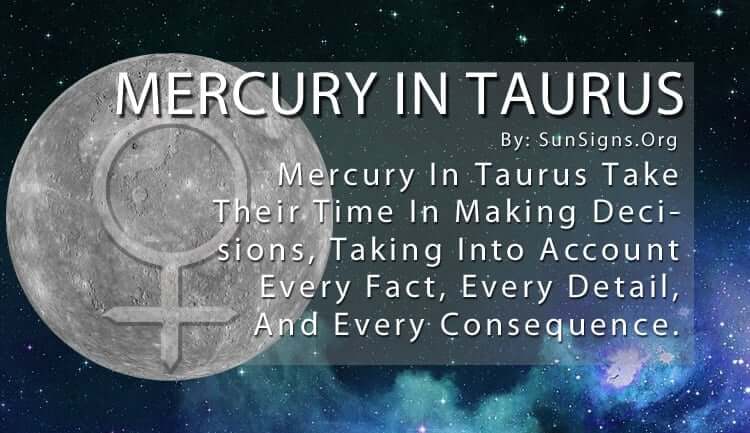 Positive Traits of the Mercury in Taurus

As an earth sign, the Mercury in Taurus is more connected to their surroundings than other zodiac signs. So they can utilize all five of their senses when viewing the world. This kind of experience shapes everything they think, feel and say. And they speak their mind with authority and purpose.

Because of this real thought process, others tend to listen to and appreciate the lessons that Mercury in Taurus imparts on them. People know that what they see is what they get from a Taurus. And that makes them incredibly trustworthy. They pride themselves in being rational, sensible individuals who have the best interests of others at heart.

They will never steer those around them wrong, and their inner circle understands this point. Because they are so down to earth, others know they can rely on them to get the job done and get it right the first time.

Negative Traits of the Mercury in Taurus

It’s never unclear what the Mercury in Taurus people want to communicate. The only thing others may be confused about is how long it takes for Mercury in Taurus to make up their mind. Some may think they are stalling for time. But this couldn’t be farther from the truth. Taurus takes their opinions and beliefs very seriously. And they will give them the time and effort they feel they deserve.


While Mercury in Taurus may have trouble getting started (and need a push in the right direction from a trusted confidant), once they are moving they are an unstoppable force. Their stubborn attitude doesn’t allow them to stop for anything.


This approach is what makes them so successful, but at the same time, others may get annoyed by their inability to go with the flow. Once Mercury in Taurus makes up their mind it’s difficult to change it for anything.

The Mercury in Taurus people has such an intense process of accepting and declining certain aspects of a dilemma that they feel their final decision is the correct one. And they aren’t usually wrong. But what they do have trouble with is when there is more than one right answer to a question. The way they approach such a position is to ask how it applies to their particular situation.

Mercury in Taurus will take a look at things from their education and tested perspective and rely on their personal experiences to move forward. While this is not always favorable to other people, they have to understand the wisdom that Taurus acquires is often quite useful.

They prefer things to be shown to them, not just discussed so that they have seen their thoughts and beliefs in action. With this kind of secure validation, Taurus can be confident that their way is the right one.