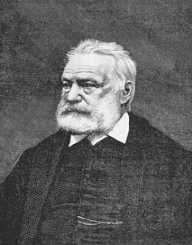 Victor Hugo was a 19th century novelist. Some of his greatest works are still studied and have been adapted into film and theater.

Victor Hugo was born on February 26, 1802, in Besancon, France. He was the youngest son of Joseph Leopold Sigisbert Hugo and Sophie Trebuchet. Joseph was a freethinking republican and officer in Napoleon's army. Sophie was a Royalist and dedicated to her Catholic faith. The family moved a lot with Joseph's work. Even though Victor Hugo enjoyed seeing all of the different countries, his mother chose to stay in Paris during their father's tour in Italy.

Victor Hugo received his education at home. His mother emphasized an education based on the Catholic faith. Later he attented Lycee Louis-le-Grand in Paris. He studied law from 1815 to 1818 but never became a practicing lawyer. His mother encouraged his writing career.

One of Hugo's first endeavors in the literary world was establishing his journal, Conservateur Litteraire. He and his friends published their works in the journal. In 1821, he released his first book of poetry “Odes and Various Poems.”

Victor Hugo was recognized as a poet and received a royal pension for it. Hugo published Han d'Islande (Hans of Iceland), his first novel, in 1823. He continued publishing literary works such as Bug-Jargal and The Last Day of a Condemned Man.

Victor Hugo was also active in politics. He was elected into the Académie française and supported a Republican government. After the French Revolution of 1848, he was elected to the Parliament. However, Victor Hugo was exiled after Napoleon III took over in 1851. He lived on the island of Guernsey until 1870 even though he was granted amnesty in 1859. He worked on his writing, including one of his most famous novels.

Victor Hugo also worked on political pamphlets against the anti-parliamentary government of Napoleon III. Upon the establishment of the Third Republic of France, Hugo returned to France and French politics. He was appointed to the National Assembly in 1870 as well as the Senate, however, he lost his election in 1872.

Even though Victor Hugo continued to write, his later works did not have the same success that his major works did.

Victor Hugo married Adele Foucher in 1822. She was the childhood sweetheart who did not have the approval of his mother. Their marriage took place after his mother's death. Together the couple had five children. Leopold died in infancy. Leopoldine died in 1843 at the age of 19 in a boating accident. The other children were Charles, Francois-Victor, and Adele. Before his own death, his wife died in 1868 while his sons died in 1871 and 1873. Even his mistress Juliet Drouet died in 1883. She was with Victor Hugo from 1833 until she died. They never married and she lived in Guernsey at the same time he was exiled there.

Victor Hugo died on May 22, 1885, at the age of 83. He was mourned by the country with his body resting in state beneath the Arc de Triomphe. He was buried in the Pantheon.

Victor Hugo was not only a Romantic French author, but he is considered as one of the greatest French writers of all time. It is not just for his work in literary fiction, but also poetry and political works. He had homes in Guernsey, Paris, and Luxembourg. When he turned 80, there were celebrations in France including the largest parade in French history. His legacy includes his name on streets and his picture on the French Franc.

Victor Hugo was born and raised Catholic. However, during the French Revolution in 1848, he stood against Catholicism and spoke out for freethinking and a republic.

Directly, Hugo's work spoke out on a number of social issues. Les Misérables took a look at social misery and injustice. The Last Day of a Condemned Man looks on compassion in a first-person diary of a man before his execution. While in parliament, he spoke out against misery and poverty as well as the abolishment of the death penalty. He spoke in favor of universal suffrage and free education. Indirectly, Hugo's work made different places popular. One example is Notre Dame. The novel about the Hunchback aided in the preservation of the cathedral and buildings that were constructed in the Renaissance period.

Victor Hugo was able to focus on his hobby of drawing during his exile in Guernsey. Though he never released them to the public during his life, he showed an interest in a modern style with an appreciation for surrealism and abstract expressionism.