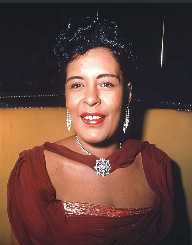 Billie Holiday was an American Jazz musician as well as a singer cum songwriter. She adopted her Billie Holiday, a pseudonym from Billie Dove whom she admired so much. Her groundbreaking melody and capability of creating music from everything and anything made her famous in her Jazz business. She was one of the Jazz Musician and even nicknamed Lady Day. She became a sensation in the Jazz music around the 1950s. She was so much remarkable for her vocal and highly creative brilliance in her music business. Her masterpiece is very popular among Jazz lovers of the day as well as her time. She had a flourishing career despite the fact that she gave her battle against drug addiction. Billie Holiday was inspired so much by Louis Armstrong and Bessie Smith and even considered one of the most peerless voices in Jazz Music up to date.

Billie Holiday was born to Sarah Julie and Clarance Holiday who were neither married nor living together. She was born on April 7, 1915, in Philadelphia. She faced a lot of challenges as a child. His father was a jazz guitarist who left her mother to pursue his career in music. She had to stay with her mother’s half-sister, Eva and have to spend her first ten years in her Eva’s mother-in-law’s house. She got sent to a Catholic reform school due to her truancy in school in 1925. Later on, in 1926, she had an encounter with a neighbor who almost raped her.

Billie Holiday was then sent to the protective custody of the school. Her mother, however, left her with the mother in law in 1928 while she joined her mother in 1929. By that time, her mother had become a prostitute; she had no choice but to join even before she clocked 14. They were both arrested in the same year when the brothel was raided. Her mother was however released by July while she was released by October.

Billie Holiday started her music career in 1929 having being released with a neighbor Kenneth Hollan. They performed in various clubs, and she got inducted into a club at West 132ndStreet. She replaced singer Monette Moore after the producer heard her. She got herself recorded for the first time. Upon the release of one of the two songs she recorded on November 11, it sold whopping sale of 5000 copies. She also played a part in a short musical Symphony in Black: A Rhapsody of Negro Life in 1935. Later, she signed a contract with Brunswick Records and collaborated with Teddy Wilson to record pop music. Her first record with Teddy was a breakthrough as it gave her recognition as an artist.

Between 1936 and 1938, Billie Holiday alongside Teddy Wilson featured in a series of performances which are co-produced by John Hammond and Bernie Hanighen. She also had a brief encounter with Count Basie as a Vocalist. They performed in different nightclubs. Billie Holiday also became the first black woman to team up with a white orchestra in 1938 when she was hired. She had her song broadcasted on various radio stations including the WABC (now WCBS). She starred in a movie, New Orleans and tracked; The Blues Are she recorded Brewin. She had numerous music releases between 1949 and 1959. She also recorded Crazy He Calls Me, and this was her most successful rendition. She published her autobiography Lady Sang The Blues in 1956. Her final album Billie Holiday was released in 1958 by MGM.

Billie Holiday married Jimmy Monroe on the 25th day of August 1941, but in 1947, they divorced each other. She later remarried Louis McKay on the 28th of March 1959. She had no children, but Bevan Dufty and Billie Lorraine were her two godchildren. She later died in New York on 17 July 1959 after cirrhosis of the liver. She was buried in Bronx County, New York. It should also be noted that she was arrested around 1947 and sentenced to a Federal Prison Camp after being found in possession of Narcotics.