Mercury In Cancer Meaning: Focus on Becoming the Best

Mercury in Cancer people learn to communicate with feelings and emotions instead of actual speech or actions.

The Mercury In Cancer: Personality

Cancer zodiac sign in astrology relies on their intuition to make decisions. So with Mercury in Cancer, their approach is to “feel out” the dilemma. They are more emotional than other star signs. So they focus on the mood of a situation rather than a logical explanation. They trust their gut reaction above their head.

Mercury represents our logic, rational thinking, and learning skills. So with Mercury in Cancer, they utilize their incredible listening skills to figure out what’s going on below the surface. They can read people like a book and instinctively know what’s going on in their minds. And when they are in an educational environment, they learn the facts and pay attention to the details surrounding those facts. 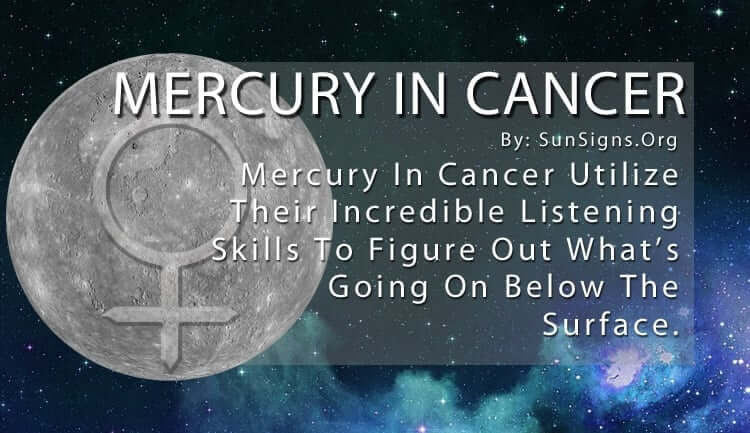 Positive Traits of the Mercury in Cancer

They reflect on what details mean and take their time to soak in what this new information means to them and those around them. Mercury in Cancer has a great memory. They can often recall specific aspects of a place, situation, or conversation from the day before too many years ago. While they can’t repeat it back exactly, they do remember what it was like and how everyone else was dealing with it at the time.

And this is how the Cancer Mercury people choose to communicate by conveying an overall impression of something. They don’t utilize logic as much as they express a feeling or stress the importance of the issue. They often speak with passion and conviction if it’s something dear to their heart. This draws others into the conversation.

Negative Traits of the Mercury in Cancer

The only thing that ever holds the Mercury in Cancer people back is a confrontation. They would rather not cause chaos, which sometimes keeps them from expressing their opinion.

And if they do speak up, it’s more because they want to try and manipulate the situation in their favor. That way, if it happens to start an argument, they can act as if that was never their intention.

But make no mistake about it; they truly are emotional and sensitive. It’s not difficult to hurt the Virgo Mercury people in reality, which is why they usually try to avoid conflict. The best way to communicate with them, in that case, is to dial back the factual evidence and focus on how it makes you feel. Mercury in Cancer will respond to your plight immediately.

Understanding the Effects of Mercury in Cancer

Mercury in Cancer personality are respected by many because they tend to know everything that relates to life and how to handle the same. You relate well with people, and that is why people love you. Mercury’s influence in your life gives you the ability to work towards making your life and the lives of others better.

You find yourself in a stimulating environment that fuels your creativity and curiosity. Mercury in Cancer meaning reveals that you are a fast learner. Things do not pass you easily because you are always ready and willing to learn something new.

When Mercury is placed in Cancer, things improve for you. You become more aware of your abilities and the things you can do to advance your career. If you are in the wrong career, you will use your curiosity to explore other career options you are passionate about.

What is the importance of Mercury in Cancer? With the placement, a sense of self-realization awakens in your life. You realize that you need to start doing things that are good for you. Focus on a career that will make you better and improve your life.

Mercury in Cancer and Love

Mercury in Cancer love relationships are happy and healthy. This is because there is love that thrives between you and your partner. You always have each other’s backs no matter the challenges you encounter in life. There is always room for romance and passion to reign supreme.

The Mercury in Cancer operates by putting themselves in other people’s shoes and going through trials with other people. So this is also how they learn best. If they can empathize with an individual or a group, they will absorb everything they need to know about them. And when making decisions, it’s best to leave Mercury in Cancer alone with their thoughts and emotions.

They will come to their conclusions in good time, as long as they are given the time and quiet environment to do so. And when they do figure things out, they will be able to express themselves effectively and poetically. That is one of their special gifts – being able to put into words the things that others can’t.

It’s because they feel everything so deeply that they can articulate what’s happening around them. They take everything personally, for that is the only way they know how to live their lives. And with Mercury in Cancer, they will let you know what they think is the best way to live yours.