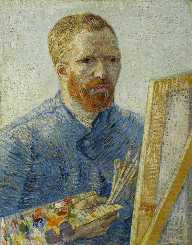 The world has seen great painters, but with the mention of Vincent van Gogh modern painters give a bow. The paintbrush felt blessed whenever this great Painter touched it. Born on March 30, 1853, Vincent van Gogh was a prominent Dutch painter who made a mark in the history of Western artwork. He is the second most celebrated Dutch painter after Rembrandt, and his world recognition has never been questioned.

Van Gogh's contribution to the world of arts was impeccable, and he did over 2100 painting works. These include 860 oil paintings of landscapes and portraits and over 1300 watercolours, drawings and sketches. Most of these works were done in France, where he studied artworks by other painters and developed his unique style.

Unfortunately, his good works were recognised after his demise. His entire life was characterised by poverty, ill health, and mental instability. These and other factors contributed to him committing suicide in July 1890 in France.

Vincent van Gogh was born to Theodorus Van Gogh and Anna Cornelia Carbentus in Groot-Zundert, Netherlands. His father was a Minister at the Dutch Reformed Church and had five other siblings. Coming from a middle-class family, Anna ensured her children were self-disciplined and upheld family values. He had his early education at home through a governess and his mother. Later, he schooled in the village school and moved to a boarding school at Zevenbergen in 1864.

Van Gogh had his middle school education in Tilburg in 1866. All this while he was unhappy and felt abandoned by his family. Despite all these, he never gave up on his childhood love, artwork. His childhood artworks were expressive and straightforward without much attention to techniques. As he grew, the skills were enhanced, and he did better artworks than before. However, Van Gogh gave up on his education and returned home in 1868.

A year after he dropped out of school, Vincent van Gogh's uncle secured him a position at the Goupil & Cie in Hague. Goupil then transferred him to their branch in London after he completed his training in 1873. In London, Van Gogh had a good life and a successful career. Life was perfect for him as he had several opportunities and goodies for himself. He fell in love for the first time, but with a wrong lady since his proposal was rejected.

The lady Eugenie Loyer was already engaged to another man. Depression set in again and this time isolated Vincent van Gogh even more which led to a drop in his performance at work. In 1875, Van Gogh’s father and uncle negotiated his transfer from London to Paris. There, he raised concerns with how artworks were being commoditized. To him, the artwork was an expression of passion and not a commodity for sales. This led to him being relieved of his post after his contract ended in 1876.

Van Gogh after his dismissal returned to England in April that same year. He picked unpaid teaching job at a boarding school in Ramsgate. He relieved himself of the post when the school was moved to Middlesex to become an Assistant to a Methodist Minister. During a six-month visit to his family at Etten, he worked in a bookshop at Dordrecht. Throughout those times, he was actively translating passages of the Bible into English, French, and German.

This in a way made him change his life to become religious and passionate to serve. To pursue his dream of becoming a pastor, he travelled to Amsterdam to take a course in theology at the University of Amsterdam. He sat for the University’s entrance exams but failed. He then moved to Laken to enrol in a three months course at a Protestant Missionary School, Vlaamsche Opleiding School but once again failed.

Vincent van Gogh still pushed up on his dream despite the failures by taking up a missionary post at the Petit-Wasme in 1879. In his bid to serve the congregants he gave out his lodging and moved to a hut nearby where he slept on straws. This action didn’t go down well with the church authorities, so he got dismissed for denigrating priesthood.

Upon advice from his brother Theo and Dutch Artist William Roelofs, he enrolled at the Academie Royale des Beaux-Arts in 1980. There, he studied anatomy and standard rules of modelling and perspective.

Van Gogh moved to Hague to commercialise some of his artworks whiles working on other paintings. He got into contact with his cousin Anton Mauve, a successful artist who advised him to work in charcoal and petal. Van Gogh was also introduced to watercolours by Mauve, and he practised it for a month.

He moved to Paris in 1886 to live with his brother Theo and had the chance to study at Fernand Cormon’s studio. Going through some artwork by other painters, he adopted their brighter style of painting and kept on developing day in day out.

Vincent van Gogh moved to Aries where he did about 200 and 100 drawings and watercolours. Most of his works were on landscapes. In 1888, he met with Gauguin and also did lots of works including a drawing of portraits and The Painter of Sunflower. The two, however, couldn’t contain themselves anymore since they were usually caught up in heated arguments. This led to Gauguin cutting Van Gogh's ears, and Van was subsequently hospitalised.

Though Van Gogh tried all his best to become a successful painter and artist, all such efforts proved futile. This led to his poor lifestyle and bad eating habits. He fell heavily on alcohol and tobacco and his mental health kept deteriorating till his death.

Vincent van Gogh never married neither did he have children. All his love relationships didn’t work out, notably among them is Eugenia Loyer, KeeVos-Stricker, and Clasina Maria Hoornik. This lonely life is one of the reasons that took his life.

Van Gogh couldn’t bear with the poverty, ill health, mental instability, and isolation. So he decided to take his life. He shot himself in the chest on July 27, 1890, but did not die instantly. He was able to make it to the hospital where initial treatments were applied. However, the bullet couldn’t be removed because there was no surgeon around. The wounds were not treated well and got infested. 29 hours after the incident, he died. His last words to his brother Theo were “The sadness will last forever." He was buried after two days in Auvers-Sur-Oise. Family members and some friends attended Van Gogh's funeral.

The world and lovers of artwork only saw how good Vincent van Gogh is after his death. He gained worldwide recognition through the exhibition of his paintings in Paris, Berlin, Cologne and New York. This heightened his fame, and his works have since contributed to the history of Western Arts. Research into the status of his health was undertaken, and it was concluded that he suffered episodic condition. In 1947, it was suggested that he might have had bipolar disorder by Perry; Hemphill, a psychologist, supported this. However, this suggestion was fiercely contended by a Biochemist Wilfred who then suggested that Van Gogh may have suffered from acute intermittent porphyria.