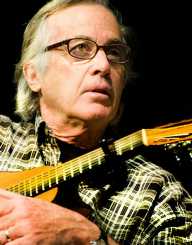 Ryland Peter “Ry” Cooder is an award-winning American musician and record producer. Born on March 15, 1947, he is a songwriter and film score composer. Despite being a multi-instrumentalist, he is known for his work on the slide guitar. Cooder has worked with numerous traditional musicians across the world and has a keen interest in root music from the United States. He has released several solo albums including Ry Cooder, 1970, Paradise and Lunch, 1974, My Name is Buddy, 2007, and The Prodigal Son in 2018. In addition to his solo works, he has worked with several musicians including Captain Beefheart, The Rolling Stone, and Eric Clapton. He has also worked with Van Morrison, David Lindley, Neil Young, and The Chieftains among others.

Ryland Peter Cooder was born on March 15, 1947, in Los Angeles, California. He was born to Bill Cooder and Emma Casaroli, an Italian-American. He developed an interest in music at a young age and started playing the guitar at age three. At the age of four, he accidentally pierced his left eye with a knife. As a result, he has a glass eye. Cooder received education at Santa Monica High School graduating in 1964. Following his graduating, he briefly enrolled at Reed College in Portland, Oregon.

After leaving school, Cooder played banjo in a trio made up of Doc Watson, and Bill Monroe. After an unsuccessful stint with the group, he later adopted the guitar. He, therefore, started playing for Ed Cassidy and Taj Mahal in the Rising Sons. However, Cooder gained some attention while playing with Captain Beefheart and his magic band. He played on the album Safe As Milk, 1967. Subsequently, he worked with the likes of Randy Newman and Van Dyke Parks.

In 1968 to 1969, Cooder worked with The Rolling Stones on various recordings as a session musician. Through this, he contributed on the albums including Let it Bleed, and Sticky Fingers. A later partnership with Charlie Watts, Mick Jagger, Nicky Hopkins, and Billy Wyman resulted in the recording of Jamming with Edward!. In 1970, he played the slide guitar for the soundtrack of the film, Performance, 1970.

Cooder started recording for the Reprise Records label under the Warner Bros Records in the 1970s. He later moved to the main Warner Bros label. This resulted in is breakthrough album Into the Purple Valley. It contained songs like "How Can You Keep on Moving (Unless You Migrate Too)" by Agnes "Sis" Cunningham. He later released albums like Paradise and Lunch, Boomer’s Story and Chicken Skin Music.

In 1979, he released, Bop Till You Drop, becoming the first popular music album recorded digitally with 3M digital mastering recorder. The album contained an R&B cover of Elvis Presley’s “Little Sister” which became an instant hit.

In 2005, Cooder released the album Chavez Ravine, a tribute to the long-gone Los Angeles Latino enclave called Chávez Ravine. He followed it with the release of My Name is Buddy, 2007 and I, Flathead in 2008. Cooder published the collection of short stories Los Angeles Stories, 2011. It talks about the 1940s and 1950s inhabitants of Los Angeles. He released Election Special, 2012, in support of the Democratic Party and President Barrack Obama during that year’s presidential election.

Cooder’s most recent works include Live in San Francisco, 2013, and The Prodigal Son in 2018.