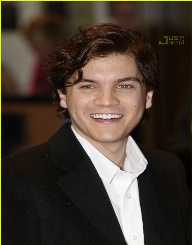 American actor Emile Hirsch was born on the 13 March 1985 in Palms, California. His parents are David Hirsch and Margaret Esther Davenport. He has a sister Jennifer. His father David is a producer and his mother Margaret an artist.

Emile Hirsch was educated at the Paul Revere Middle School in LA and later enrolled at the Performing Arts. He was also a pupil at the Hamilton Academy of Music.

Emile Hirsch was interested in acting from a young age and first appeared on television at the age of eleven in Kindred: The Embraced (1996). His first Hollywood film was The Dangerous Lives of Boys, and he had other roles before making a breakthrough in The Girl Next Door (2005).

The same year, Emile Hirsch starred with Heath Ledger in Lord of Downtown (2005). He then had roles in Alpha Dog (2006), Into the Wild (2007) and Milk (2008). He played the role of Billy in Taking Woodstock (2009). This film was based on the Woodstock Concert which was held in 1969. He was in the action thriller The Darkest Hour (2011) about aliens attacking the earth via the power supply.

In 2012 Emile Hirsch appeared in the crime thriller Savages; the thriller The Motel Life about two brothers caught up in a fatal hit-and-run accident and Twice Born. Twice Born also starred  Penelope Cruz.  The film is about a mother taking her son back to her homeland Bosnia to show him where his father died in the Bosnian conflict in the 1990s. During 2013 he also had roles in Prince Avalanche and Lone Survivor. He also appeared as Clyde Barrow in the two-part television film Bonnie & Clyde.

Recent films include The Autopsy of Jane Doe (1016), the Disassembled Man (2017)  and All Nighter (2017) a comedy set in Los Angeles about an alcoholic father searching for his daughter.

November 2007 saw Emile Hirsch cited as one of the Actors of the Year alongside luminaries such as Cate Blanchett, Denzel Washington, and Robert Downey. In 2007 he tied for fifth place with Seth Rogen in the Dublin Critics Circle Awards: Breakthrough Award for Into the Wild (2007).
At the Broadcast Film Critics Association Awards in 2009 Hirsch was part of the cast of Milk (2008) who won the Best Acting Ensemble award. He won the Mill Valley Film Festival Award for Best Actor 2007 for Into the Wild (2007).

Besides acting, Emile Hirsch enjoys writing and has worked on a novel and a screenplay. He is also a keen painter.

After being jailed for an aggravated assault charge in 2015, Hirsch entered rehab to deal with his alcoholism. During his time he confronted issues relating to his life, especially his parent's divorce when he was young. He is on record as saying that he deeply regrets the assault and sometimes can’t even believe that it happened.

Painting is a hobby, and Emile Hirsch also enjoys creative writing. He is also a musician.

In 2015, Hirsch had a charge of aggravated assault laid against him after a fight in a nightclub in Utah. He was fined $4,750 and given just over a fortnight in jail plus community service and ninety days probation.