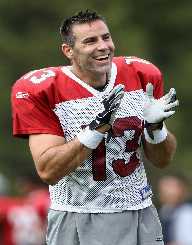 Kurt Warner was born on June 22, 1971, in Burlington, Iowa, USA. His parents are Sue and Gene Warner. However, his parents divorced when he was young, so he primarily lived with his mother and his brother, Matt. His mother later remarried, but Warner never became very close with his new stepfather.

As a teenager, Kurt Warner attended Regis High School. While attending this school, he played a variety of sports, including basketball and football. He excelled more in football than he did in any other sport. While in high school, he helped his team win many games, even earning himself an MVP award along the way.

After high school, Warner went on to attend the University of Northern Iowa. He continued to play football at college, but he did not get as much time to play as he did while he was in high school. He was benched for three seasons of his college career, and he almost stopped going to college entirely because of it.

However, Kurt Warner stuck it through the hard times and eventually got back to playing at the college. After college, he was invited to train to become a player for the Green Bay Packers, but he was cut from the training just a few weeks later.

After college, Kurt Warner spent some years doing average minimum wage jobs before he began playing for the Iowa Barnstormers in 1995. He played on this team for a few seasons before he left the team in 1998. In 1998, Warner signed a contract to work with the St. Louis Rams as a free agent. He played on the team for over a year before he replaced Trent Green as the Rams’ quarterback after Green suffered a knee injury. As the quarterback for this team, he scored over three dozen touchdowns and passed for over four thousand yards. He even helped this team to win the Super Bowl XXXIV.

In 2002, Kurt Warner helped the Rams to get to the Superbowl. There, for Super Bowl XXXVI, his team faced the New England Patriots. Both teams did well, but the Patriots won 20-17. During this season he also passed over four thousand yards and had thirty-six touchdowns. He stayed with this team until 2003.

In 2004, Warner began playing for the New York Giants. He only played with this team for this one year. While with the team, he had over two thousand passing years, but only six touchdowns.

In 2005, Kurt Warner began playing with the Arizona Cardinals. He played with this team for several years before he helped his team reach the Super Bowl in 2009, for the Super Bowl XLIII. There, his team faced the Pittsburgh Steelers. Sadly, his team lost 27-23. During this season he also had over three thousand passing yards and just over two dozen touchdowns. This would be the last year he would play football professionally.

After announcing his retirement in 2010, Warner said he wanted to spend more time with his family, but that has not stopped his sports career. He joined the NFL Network in 2010. With this job, he would work on several football shows, including NFL Total Access, Thursday Night Football, and later on (in 2014) Monday Night Football.

Also in his retirement, he appeared on several televisions shows as a guest star. He appeared on Dancing with the Stars, The Jay Leno Show, and the Suite Life on Deck.

All of Warner’s awards are due to his football career. Some of his most impressive awards are listed below.

Kurt Warner married Brenda Carney in 1997. Together, this couple has five children. Warner also has two stepchildren from this marriage, which he has legally adopted.